In a pinch, upgrade the humans or redistribute the robots 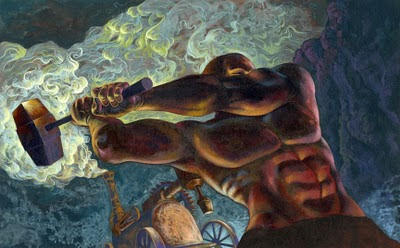 In my last post, I took a somewhat dim view of economic theories that rely on extremely specific but unobservable changes in technology to make them tick. Let's not be futurists until we absolutely have to.
BUT, that said, it's really fun to be a futurist! I read a lot of science fiction, and as an economist I love speculating about how our economy and society would respond to various technological advancements. So I'm going to take off my scientist's hat for a minute, and put on my fun-but-ultimately-useless futurist's hat, and with that caveat I'll try to answer the question: what do we do when robots replace workers?
Will Wilkinson explains how automation can increase inequality:

[S]uppose [as a factory owner] I replace all my workers with machines. Questions of distributive fairness disappear! I own the machines; I don't owe the steely suckers anything!...Now, I don't know what all those workers I laid off are doing...Certainly my demand for robots...has created vigorous growth in the robot manufacturing sector. But...job growth there can last only as long as it takes to come up with robots that build robots that build robots, and so on. So workers are slowly squeezed out of manufacturing by automation...This squeeze has many implications, one of them being that here is an important sector of the economy in which more or less all the gains accrue to the owners of capital and more or less none to the working class, simply because the working class doesn't work here anymore...the robot-owning class moves up a bit relative to the no-longer-manufacturing working class...

In the past, technological improvements have never made human labor obsolete; no matter how big the change, there's always been something new for us to do. But that may not always be the case, because humans are fundamentally limited beings. Yes, some human or another will always be needed as labor, but that might end up just being a few really brilliant people working on robot improvement.

So if that day comes, what do we do to prevent the massive inequality that will result? As I see it, there are two basic approaches:
1. Improve the human being, or
2. Redistribute capital ownership rights among human beings.
Following Bruce Sterling, I will call these the "Shaper" and "Mechanist" approaches* (which just goes to show that anything economists think of in 2011 was thought of by sci-fi authors three decades earlier).
The Shaper approach is simple: use technology to make humans smarter, or otherwise more capable, so that we maintain our usefulness even in an era of better and better robots. Alex Tabarrok makes this case:

Will robots and artificial intelligences take human jobs? Perhaps but the nature of humanity is not carved in stone. Genetic enhancement (GE) is within a hairsbreadth of reality...In the not so long run it's not about computers substituting for labor or even complementing labor, it's about designing labor to complement computers (and vice-versa).

This option is attractive because it allows us to preserve the same sort of labor market we have now. Workers are valuable, so capitalists hire them; workers get both money and a sense of personal worth and dignity.
One problem with the idea, of course, is that humanity has all kinds of moral hangups about this kind of human enhancement. Though Tabarrok believes that the market, and competition among nations, will eventually overcome our qualms, I'm not so sure. There is a vast web of institutions that we have created to slow the progress in human sciences - human subjects review boards, the FDA, the entire medical system for that matter. In any rich country, research into human improvement is severely curtailed, and technologies are strictly regulated. It may be that markets will eventually win out and give us superbabies who will be able to hold their own against robots, but we might have to wait for quite a long time.
A second problem, of course, is that human improvement might create its own form of inequality.  If left to the market, superbaby technology would be available only to the rich, locking in inequality across generations. That is something we will want to avoid. But if governments were to appropriate and distribute the best baby-enhancing technology, it would go a long way toward creating equality of opportunity.
The Mechanist response to an automated society, on the other hand, is to redistribute ownership of the robots (Tyler Cowen favors this approach). As Will Wilkinson points out, robots are slaves (even if self-aware, self-motivated artificial intelligence is possible, there's not necessarily any need for us to use it). Given a world where every product and service is produced by robot slaves, we'll have massive inequality between those who own the robots and those who don't. But if we simply redistribute ownership of the robots amongst society, equality will be back. This would be a real, working version of George Bush's failed "ownership society" concept.
There are, of course, problems with this approach as well. How do we accomplish this redistribution fairly? Won't people who get fewer robot-shares try to seize others by force? Will this redistribution severely reduce the efficiency of the robots' use? What happens if some people sell all their robot-shares, only to spend all the proceeds and see their children become poor again? It's clear that widely-distributed capital ownership isn't stable over the long run. Labor tends to create an egalitarian society because everyone gets a brand-new endowment of labor when they're born. It would be difficult to replicate this happy coincidence with widely distributed capital ownership.
And finally, both of these remedies assume that humanity will still be in control of policy and will still own the means of production. True replacement of humanity would mean artificial intelligence - machines that can not only do everything we do, but can make decisions about what to do better than we ourselves can. If we manage to replace ourselves in every last respect, then we're out of the Bruce Sterling universe and into the Isaac Asimov universe. Or maybe Terminator or The Matrix. When two intelligent species share a planet, the result seems unlikely to be pretty...seen any Neanderthals lately?
In any case, if it ever does look like our species is becoming obsolete, I suggest we employ a hybrid of the "Shaper" and "Mechanist" approaches. We should get used to the idea that upgraded humans will command much higher wages, which they will use to support their unmodified parents in our old age. Government redistribution of human-upgrading technology could make equality of opportunity even more of a reality than it is now. And in the meantime, we can try more sensible approaches to creating a true "ownership society," one that is more than just a housing bubble...maybe by turning Social Security into a forced-contribution pension scheme that only buys shares in an index-fund-of-everything (and forcing companies of a certain size to go public)? And maybe by giving out welfare checks not as cash, but as shares in this omni-fund?
Anyway, fun goofy futurism aside, I think that the problem of robots replacing us is still MUCH MUCH farther away than many economists seem to think. The current global economic turmoil might be a tiny bit about the end of labor, but my hunch is that the vast majority is about rapid globalization and a good ol' once-in-four-generations financial crisis, with a few resource constraints and government policy mistakes tossed in. But if and when the robots do really replace us, rest assured that we have options. Options that are fair and equitable and safe, if more than a bit weird to our modern sensibilities.
(Unless Skynet takes over. In that case, all we can do is reach for the plug.)
* Actually, the Mechanists also boosted themselves with cyborg enhancement. My concept of human enhancement is that we'd use both genetic manipulation and cyborg technology. So I'm not exactly copying Sterling. Widespread distribution of the ownership of robotic capital is really more like a Vernor Vinge setting.
Author: Noah Smith Posted at 11:26 PM