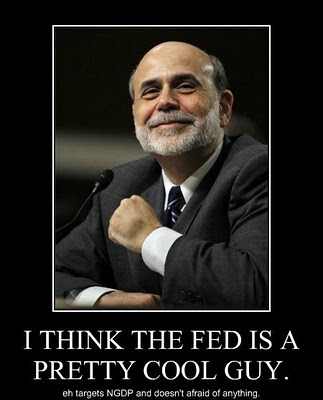 The econ blogosphere is afire with talk of "NGDP targeting." I don't have a huge amount to add to this discussion, but this post by Greg Ip caught my eye:


[There is] flawed reasoning behind the newborn infatuation with nominal GDP targeting. Its advocates, which include my colleague, R.A. and Goldman Sachs, now include Christina Romer...

A nominal target can affect expectations in two ways. First, it influences markets’ expectations of what the Fed will do, thereby amplifying monetary actions...But there are many, potentially superior, ways to achieve the same thing, such as a promise to keep short-term interest rates at zero for a specified period of time, to target bond yields, or to keep rates low until a particular inflation or unemployment rate is achieved...Second, a nominal target should encourage firms and workers to behave in a way that makes the target self-fulfilling.

NGDP advocates base their arguments on a flawed premise: that with a different framework the Fed would have been less concerned about inflation and more about output, and would have thus eased more aggressively.

There is, of course, one rather unseemly advantage to NGDP targeting, that Paul Krugman alludes to here: it is a surreptitious way of temporarily raising the inflation target without the toxic politics of doing so explicitly...One should normally be wary of a monetary policy that achieves its objectives through subterfuge, but desperate times call for desperate measures.

In other words, NGDP targeting is popular in large part because the words "NGDP targeting" are less offensive to the hard-money types, inflation hawks, Republican politicians, John Taylor's army of clone cyborg stegosauruses, etc. This is probably because A) "NGDP" sounds less scary than "inflation" or "printing money" to non-intellectual conservatives and B) the advocates of NGDP targeting focuses on the fact that it acts through rational expectations, which intellectual conservatives are supposed to like.
That in itself tells you exactly how likely it is that an NGDP target would hold up if anyone called its bluff...i.e., very unlikely. Hence, it is very likely that the bluff would be called. Hence, knowing that the bluff would be called, the Fed will not adopt an NGDP target. Game theory in action.
I do think that "print money and buy stuff" is a good thing to try to get out of a recession. However, it strikes me as a bit farcical to think that the only way to implement this policy is to simultaneously A) convince businesspeople that the Fed is willing to print massive amounts of money, and B) convince Republicans that the Fed is not going to print massive amounts of money. It's just not going to work. Has our politics really gotten so dysfunctional that this is our best idea? Well, you can answer that one for yourself.
(Note: anyone who does not know the meme referenced in the Bernanke picture is either old, or obviously doesn't spend enough time surfing the web and getting into flame wars on Facebook...)
Author: Noah Smith Posted at 6:31 PM