Why should China innovate when it can just steal? 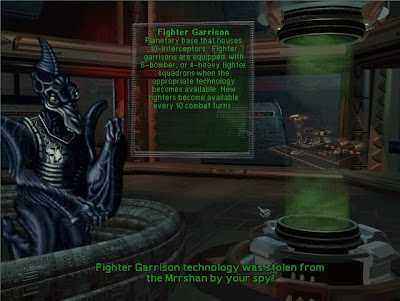 Another day, another "Can China innovate?" story popping up in my Twitter feed. This is a beast of the same family as the "Prepare for a wave of Chinese innovation" article and the "America can only stay ahead if we innovate" article. But I never see anyone asking this question:

Why should China bother with innovation when it can just steal technology?

When I was but a lad, I used to play a game called Master of Orion II. In this game, as the leader of a star empire, you can research new technologies. You can also hire spies to go steal technologies from your competitors. Spies are cheap and quick. If your species has an advantage in spying, it almost doesn't make sense to pour your resources into research; instead, you can just steal everything you need, and put your people to work building warships instead of peering through microscopes. There's only one problem with this strategy - it makes all the other races of the galaxy declare war on you.

China is not in any danger of having the rich countries of the world declare war on it. It also has an advantage in spying, given its large and well-educated population (which results in many Chinese nationals in grad school or working as engineers in rich countries). So it's not surprising that life imitates Master of Orion II - China does a huge amount of spying and steals a huge amount of technology.

Does it make sense for China to do this? Given that it's not in danger of physical attack, the only downside to this strategy would be if A) rich countries retaliated by restricting trade with China, or B) Chinese espionage actually reduces the amount of innovation that goes on in the world. Are either of these downsides scary enough to make China stop its espionage?

Trade protectionism as retaliation for spying is probably not a danger. First of all, spying is hard to measure, making it hard to know when to end the punishment (maybe the spies just laid low until the tariffs were lifted!). Second of all, the protectionism would probably have to be coordinated among rich nations, and that is notoriously hard to do, especially given the collateral damage that might be inflicted on the economies of the rich countries.

So could Chinese espionage cause a global innovation slowdown? Innovations are a mostly nonrival good, so a company has no incentive to innovate if it can't partially monopolize its innovations. Hence, in a world where China just steals everything, companies might as well just not innovate. Since companies are responsible for a substantial portion of the innovation in the world, this would be bad for China, since it would slow global economic growth, reducing demand for China's exports, investment into China, etc. It would also "kill the goose," forcing China to either rely on domestic innovation or accept slower productivity growth.

(Now of course, in the real world, the question I've posed - "Should China innovate OR steal?" - is silly. It's not an either-or question. China faces an allocation decision - it has to decide how many of its smart people it wants to send overseas to steal stuff from rich countries, and how many it wants to put to work discovering new things. The costs of spying, which I described above, are in addition to the opportunity cost of research manpower that China incurs from its espionage activities. Spying probably has diminishing returns in the number of spies. Also, the return to spying probably falls as your country catches up technologically with the country you're ripping off; the fewer things there are to steal, the harder it is to steal each one.)

But is "killing the goose" really a cost for China? Remember, saying "China does this" and "China wants that" is really a misnomer, since China is not monolithic. If we're talking about the Chinese government, it may be that the government cares about China's relative power in addition to its absolute wealth. There are some indications that China's leaders have this mindset. In this case, spying becomes more attractive relative to research. Do you care if you cause a global innovation slowdown, if that slowdown hurts your rivals more than you? To the extent that rivalry matters to you, you don't care. You spy more and research less.

Another point: Espionage and innovation are not the only ways to acquire technology. China can also force foreign companies to give it technology in exchange for access to its huge domestic market. Even if U.S. and European companies end up losing out in the long run from this kind of deal, the short-term pressures of the stock market (which determines executive compensation) may force companies to do this. Unsurprisingly, China has been doing some of this too.

So, back to the beginning of the post. Instead of considering the question of Chinese innovation in isolation, we should consider the totality of ways that China can acquire technology to continue raising its productivity. We should not be asking "Can China innovate?", but rather "Can China innovate, steal, and/or force foreign companies to transfer technologies to China in exchange for market access?" Anyone who is rooting for China's economy should not be so worried by the innovation limitations discussed in articles like this one, unless they also believe that China's demonstrated capacity for forced tech transfer and espionage are also diminishing.

One more point. Economists are beginning to take seriously the idea that we are in a Great Stagnation. They should think about whether the rate of technological progress is being impacted by Chinese espionage and forced technology transfer.
Author: Noah Smith Posted at 7:48 PM