Without a doubt, QE has been an incredible boon for financial markets. Backed by QE3, the SP500 stock index has risen by more than 12% year to date. Yet in spite of this increase in the stock market, overall real economic conditions remain relatively stagnant. Year over year inflation as measured by the core PCE price index ticks in at only 1.2% YoY, and last quarter's real GDP grew by only 1.4% YoY. This disconnect is a bit unsettling, because it suggests that bullishness in the stock market has failed to translate into broader growth. On this basis, some commentators, such as Frances Coppola, have argued that quantitative easing does nothing for the broader economy and worsens economic inequalities. But this concern can be reduced to an even simpler question: Has recent stock market growth just been a bubble? There are a few reasons why this question is important. First, people make a lot of noise over the financial instability hypothesis that monetary policy is just fueling speculative excess. So for the sake of practical monetary policy, it matters if signs of a bubble are appearing. Second, if it can be shown that we are not in a bubble, and that recent financial market movements are based on fundamentals, this means that monetary policy is passing through to the economy. It's not just some scheme to enrich the wealthy. Moreover, the tools that we develop to analyze this issue can help us determine in the future if certain monetary policies are passing through to the economy. Third, analyzing this issue leads to some more insights on how finance and macro can work together. While I am sympathetic with Scott that finance should be kept out of theories of money, given that financial indicators function so well as forecasts, it would be a shame to not use as much data from the financial markets as possible.

Because this is a highly charged question, I want to make the conversation as concrete as possible. When I talk about a bubble, I don't just mean "stock prices are high". Rather, I want to define a bubble as when stock prices are "out of line" with the fundamentals of the underlying companies. What this means is that if China blows up next year, and the price of stocks fall, that doesn't mean the bubble popped. A blowup in China is an exogenous event that would change fundamentals, and prices would adjust as a result. The type of bubble that I'm talking about is a noise trader, "beauty contest" bubble, in which people go into a frenzy bidding up the price of securities on the belief that everybody else will bid them up as well.

So let's start by talking about how monetary policy affects stock prices. On first approximation, the value of a stock should be equal to the present discounted value of all dividend payments. Sure, there's excess volatility around the edges, but this simple model of cash flows is still accurate on average. In doing so, it gives us two ceteris paribus predictions about stock prices. First, a stock price should go up in response to higher expected future cash flows. Second, a stock price should go down with higher expected real interest rates, because a higher real rate reduces the discounted value of future cash flows. These are the two main channels through which monetary policy impacts stock prices. Monetary policy can either (1) raise the cash flows by improving the economic environment, or (2) lower the discount rate by maintaining an extended period of low real rates.

These two channels split quite nicely into a positive and negative take on the effect of monetary policy. If monetary policy raises stock prices because of current and future cash flows, that should be seen as a good sign of a recovering economic environment. This corresponds to "the Fed is improving the fundamentals of the economy." On the other hand, if monetary policy affects stock prices only through a lower discount rate, that is just a sign of an "immaculate conception", with stock prices rising without an improving economy.

Most market monetarists believe it's the former, whereas some fiscalists have made an argument that it's just the latter. But here's the kicker -- we should be able to distinguish the two by looking at the actual earnings data. By comparing the earnings of companies and the stock prices, we can actually make concrete the discussion about whether the stock market is in a bubble. In particular, we can distinguish between the two stories by looking at price to earnings ratios, or the ratio between the price of a stock and the earnings per share -- both in the trailing 12 months and 1 year forward estimates. If the fundamental story is correct, then we should observe that the price to earnings ratio stays relatively constant. Yes, stock prices are rising, but that's only because earnings are stronger. If the speculative excess story is correct, then the price to earnings ratio should be rapidly rising as the price is bid up, but the underlying earnings remain unchanged.

On this note, it doesn't look good for the bubble mongers. Below I have trailing 12 month and 1 year forward price to earnings ratio plotted for the SP500 index as a whole. The index P/E ratio is calculated through a market capitalization weighting process of the underlying index securities. What this shows is that, right now, stocks are quite cheap. The trailing 12 months PE ratio is at 15.5, a far cry from the heady tech bubble days with a peak P/E of 30 or even the moderate 2002-2008 period when the PE ratio tended around 18. The trailing 12 months ratios mean that prices aren't out of line with past performance. The fact that forward ratios are also relatively low and near the trailing ratios indicates that stock prices aren't up on the back of extremely optimistic future forecasts. Even though high PE ratios aren't sufficient conditions for a bubble, they're certainly necessary ones. If this is a beauty contest, it's awfully fair. 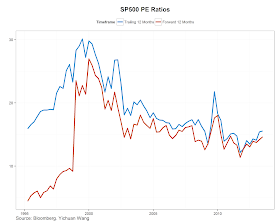 The moderate P/E ratio signals that people are not overpaying for performance. This isn't the 1990's -- market participants are not basing valuations off of overly optimistic views of future earnings. Rather, people are just paying reasonable amounts of money to buy into each company's earnings, resulting in reasonable stock prices.


Now, in my analysis above I glossed over one more channel that's relevant for the financial stability debate. It's possible that the liquidity provided by monetary policy encourages people to take riskier investments because they're "reaching for yield." But we should differentiate two versions of this hypothesis. The first is that people are over weighting risky sectors at the expense of safe ones. But this should not be a concern of policy because it's not systemic. When the reach for yield reverses itself, some stock investors will win, others will lose, and while there may be blood, policy makers need not wash their hands. On the other hand, if people are just pouring their money into stocks in general because they are dying for yield, then policy makers might be concerned. But the low PE ratios belie this hypothesis, so policy makers can still rest easy.

So if equities aren't a bubble, this means that the recent rise in stock prices corresponds to better fundamental performance for these companies. Therefore we should expect a pass through to the overall economy and for conditions to improve. Monetary policy was certainly not futile.

This can also give us a sense of where the economy is going as well. From the P/E ratios and the actual index level of the SP500, we can back out a quarterly earnings index -- both expected future earnings and actual trailing twelve months. By comparing expected earnings with the actual earnings one year later, we can actually evaluate how accurate forecasters were. Surprisingly enough, post dot com bubble, earnings forecasts were pretty accurate during normal times, and only when there was a policy failure (in 2008), was there a significant deviation. This suggests that earnings should continue to grow, and that the real concern shouldn't be on whether the stock market is getting frothy, but on whether overly contractionary monetary policy will send the recovery off course. 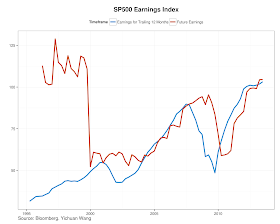 Now, this recovery may not be pretty. It's entirely possible for median household incomes to continue their stagnation. Remember, stable nominal GDP is consistent with almost any configuration of the real economy. You can have severe inequality, a low labor share, and inefficient labor markets and still have a monetary policy that keeps nominal GDP on track.

So if you want to avoid those bad, unequal, configurations, then you will earn my respect as you fight for targeted fiscal interventions. Just keep your hands off my monetary policy, because the most dangerous idea you can have is that it doesn't matter.