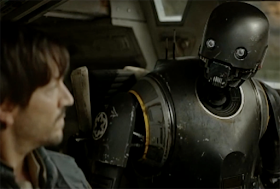 One advantage of writing down models in math, even if you can't test them, is that you make the ideas concrete. For example, take a recent exchange between Ryan Avent and Paul Krugman. Avent is trying to explain robots could be taking jobs even while productivity is slowing down. Lots of people have said made some variant of the argument: "If robots are taking our jobs, how come productivity growth is so slow?" Here's Avent's theory:

How does automation contribute to this abundance of labour?...[T]here’s a...straightforward and important way in which automation adds to abundance now. When a machine displaces a person, the person doesn’t immediately cease to be in the labour force...

In some cases workers can transition easily from the job from which they’ve been displaced into another. But often that isn’t possible...Such workers find themselves competing for work with many other people with modest skill levels, and with technology: adding to the abundance of labour.

Second, the abundance of labour, and downward pressure on wages, reduces the incentive to invest in new labour-saving technologies...

Fourth, low wages and a falling labour share lead to a misfiring macroeconomy...

So there you are: continued high levels of employment with weak growth in wages and productivity is not evidence of disappointing technological progress; it is what you’d expect to see if technological progress were occurring rapidly in a world where thin safety nets mean that dropping out of the labour force leads to a life of poverty.

Some pieces of this I get, others I don't. Reduced bargaining power explains the wage stagnation piece, but doesn't explain how wage stagnation goes along with slow productivity growth.

The macroeconomic piece makes sense if you believe in some form of Verdoorn's Law, but it seems like it would be self-limiting - if faster technological progress led to downward pressure on wages which led to deeper recessions which led to slower productivity growth, then recessions would slow down robotization and allow wages to rise again (maybe that's what's happening now!).

The same is true of the long-term innovation argument. If fast technological progress in robots displaces workers, lowers wages, and reduces the incentive for more robot innovation, productivity will then slow and workers will catch a break.

The first part of the argument is the most interesting, but also the hardest to understand when written in words. Is this just Baumol Cost Disease? If so, why is it happening now when it didn't happen before?

Fortunately, Paul Krugman came in and formalized this part of Avent's argument. I'm not sure Krugman exactly captured what Avent was trying to say, but Krugman's model is simple and interesting in its own right. It's a powerful argument for the "models as simple formalized thought devices" approach to econ that I sometimes pooh-pooh.

Krugman's model is of an economy with 1 good and 2 production processes - one capital-intensive, one labor-intensive: 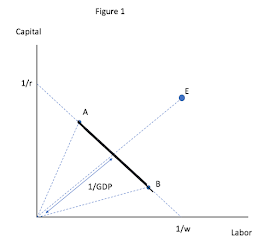 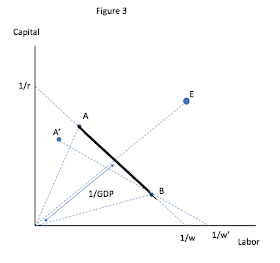 It will also lead to more workers going into the labor-intensive B sector, which is the kind of shift Avent seems to be talking about.

So in this model it wouldn't be better robots that made economy-wide productivity and wages go down. It would be a slowdown in the technologies that allowed humans to compete with the robots.

This would be hard to verify empirically, since identifying human-complementing productivity growth and human-substituting productivity growth will require some major theoretical assumptions. But just casually glancing at the data, we can see that there are other productivity divergences in the economy that might be roughly analogous. For example, durables TFP growth has increased faster than nondurables TFP growth since the early 70s: 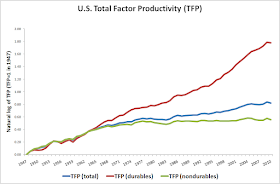 So if we think durables production is a lot more capital-intensive than nondurables production (which includes a lot of services), this could be a sign that a slowdown in labor-intensive production processes is generally underway (maybe as a result of expensive energy? top-out of education? some government policy?).

Anyway, so I think in order to make Avent's thesis work in Krugman's model - in order to make robotization be the cause of both slowing productivity growth and of wage stagnation - there has to be a slowdown in non-robot technology going on.


Since changes in relative factor prices tend to be similar across firms, lower relative equipment prices should lead to greater capital adoption and falling labor shares in all firms. In Autor et al. (2017) we find the opposite: the unweighted mean labor share across firms has not increased much since 1982. Thus, the average firm shows little decline in its labor share. To explain the decline in the aggregate labor share, one must study the reallocation of activity among heterogeneous firms toward firms with low and declining labor shares.

So how could this be reconciled with the Avent "robotization" theory? Well, take a look at Krugman's model. And now imagine that the "superstar" firms are the firms that use technique A, while the laggard firms use B. Krugman's theory doesn't include monopolistic competition, but it's easy to imagine that A, the capital-intensive technique, might have economies of scale that make A-using firms bigger and fewer than B-using firms. So a slowdown in progress in B would lead to a shift of resources toward the A firms, causing increased industrial concentration and a lower overall labor share without affecting the labor share within each firm - exactly what Autor finds. And it would do this while also causing economy-wide productivity to slow down and wages to stagnate.

That's neat. But it still means that, fundamentally, a technology slowdown rather than a speedup would be the root cause of the economy's problems - not a rise of the robots, but a world where robots are the only thing still rising.
Noah Smith Posted at 6:38 PM
Share