A halfhearted semi-defense of Casey Mulligan 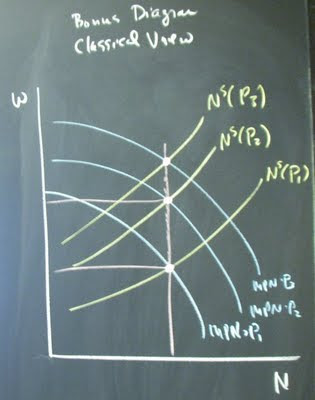 Our labor market has long-term problems that are not addressed by Keynesian economic theory. New Keynesian economics is built on the assumption that employers charge too much for the products that their employees make and are too slow to cut their prices when demand falls. With prices too high, customers are discouraged from buying, especially during recessions, and there is not enough demand to maintain employment.

When the financial crisis hit in 2008...New Keynesian fears seem to have been realized: consumer prices had to fall to maintain employment, but too few employers were willing or able to make the price cuts quickly enough. The result was going to be a severe recession that could be partly cured, in the short term, by fiscal stimulus or, in the longer term, as more companies had the time needed to cut their prices...[but] the low employment rates we have today are too persistent to be blamed on price adjustment lags[.]

It looks as if he’s assuming that nominal demand is constant, so that a fall in prices would lead one for one to a rise in real output. But where’s that coming from?

If he had read anything — anything at all — that Keynesians have written about policy at the zero lower bound, he would have learned that there is no reason to expect falling wages and prices to raise employment — in fact, quite the contrary in the face of a debt overhang.

For firms and workers to cut their prices in a downturn has, New Keynesians (and Old Keynesians, and monetarists, and Fisherians, and Wicksellians, and a host of others) think, two effects:


Back in 1933, I think, Irving Fisher argued most strenuously that deflation was destabilizing: that downward moves in nominal wages and prices were not the cure but the cause of Great Depressions.

It is much better to use other policies--open-market operations, quantitative easing, commitments to further expansion in the future, loan guarantees, government spending, tax cuts--to boost nominal demand in both the short and long run than to sit back and wait for deflation to someday, somehow restore the proper functioning of the market system and return the economy to full employment.

Both DeLong and Krugman are right, in the sense that the existence of debt deflation and liquidity traps mean that you can't just sit there and wait for falling prices to cure a depressed economy.
But they are defending New Keynesians, or the New Keynesian movement. Many economists who count themselves as New Keynesians (or Old Keynesians, or monetarists, or Fisherians, or Wicksellians) understand and believe in the existence of debt deflation and liquidity traps. But that is a very different thing from defending New Keynesian models Mulligan is actually right about the particular New Keynesian model that he is criticizing.
The classic New Keynesian model is a sticky-price model. In that model, recessions happen when firms are unable to lower their prices in response to falling demand. The solution is for the Fed to cut interest rates, thus raising demand. In these models, if the Fed does not cut interest rates, deflation eventually brings the economy back to full employment at a lower price level, just as Mulligan says.
That's it. No debt deflation, no liquidity trap. The economy can be perfectly stabilized by the implementation of a Taylor-type rule governing nominal interest rates. This is what you will find if you read Michael Woodford's book.
Now, it's true that New Keynesian models have developed far beyond this baseline. And, of course, people who call themselves "Keynesian" (New or otherwise) in no way believe that this model fully describes the economy. But that doesn't erase the grain of truth at the core of Mulligan's crude caricature. The basic "New Keynesian" sticky-price model is not very useful in describing the situation in which we now find ourselves.
Nor was it intended to be. The original sticky-price models were not intended to be a "theory of everything," they were intended to tell the simplest possible story of why demand might matter for the macroeconomy. At the time that Mankiw and Calvo and others were laying the foundations of New Keynesian theory, the "neoclassical" paradigm and the RBC model were in the ascendant; many macroeconomists had been convinced that all recessions were caused by supply shocks, and that demand basically didn't matter at all. Sticky-price models were a way of saying "No, wait, demand shocks could matter as well," in a way that fit into the DSGE framework that neoclassicals insisted everyone use.
The sad truth of the matter is that when macro models are created to tell stories instead of make predictions, it becomes pretty easy for anyone to poke holes in their political opponents' baseline models. And it's also true that stories have power; many smart New Keynesian economists were convinced, before the 2008 crisis shattered their faith, that the Fed really could manage the economy with things like interest-rate targeting.
That turned out not to be true. And to their credit, New Keynesian (and Old Keynesian, and monetarist) economists rapidly realized that their framework had been too narrow, and turned to an older and more diverse set of models to help them understand what they were seeing...while neoclassical economists like Casey Mulligan mainly buried their heads in the sand and blamed the recession on Obama or other chimeras. So it is a little rich for Mulligan to be taking potshots at twenty-year-old New Keynesian formalism, at a time when the people who made or endorsed that formalism have basically moved on.
Final note: I should point out that after he points out the weakness of the classic sticky-price model, Mulligan goes on to say a whole bunch of nonsense things about labor costs, minimum wages, etc. I do not want this blog post to be read as an endorsement of any of that silly stuff.


Update: Brad DeLong emails to point out that the financial accelerator models of Bernanke and Gertler are considered "New Keynesian" models. To be honest, I didn't know that. Actually, sad to say, I never even learned those models from any of the macro classes I took (time for "What I learned in econ grad school, Part 2"?), and only found out about their existence on a tip from a friend at Berkeley! So my defense of Mulligan's terminology can be chalked up to my own Dark Age ignorance. Doh.

But, I reiterate the points I was trying to make: Mulligan discusses one single "New Keynesian" model, the sticky-price model of Calvo, Woodford, etc. He is right insofar as he is saying that that model is sorely inadequate. He would be right if he had pointed out that its inadequacy is mainly a result of the use of macro models to "tell stories" (but he did not point this out).  He is wrong insofar as he is claiming that the "New Keynesian" paradigm or movement is thus discredited. And he is kind of bizarre in his claim that we should be focusing on long-run supply-side policies.

Update 2:  My halfhearted semi-defense is smacked down by Paul Krugman.
Author: Noah Smith Posted at 3:04 PM