Libertarianism and the Tamerlane Principle 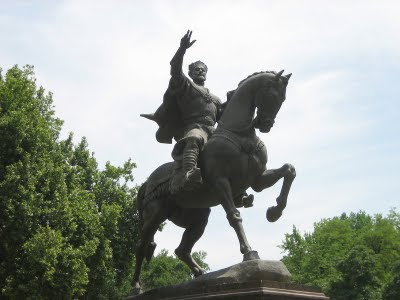 Still in Japan and working hard, so expect posting to be infrequent...
Anyway, I encourage everyone to read this excellent article by Stephen Metcalf. It's about Robert Nozick and the birth of modern American libertarianism. The piece does a great job of critiquing libertarianism from the standard "social welfare"/"institutions" point of view.
I want to be clear: I think that if the only thing wrong with libertarianism were that it rejects social welfare and ignores real-world institutions, that would be more than enough to allow me to oppose the dogma in good conscience. But I tend to criticize libertarian thought from a very different angle.
My problem with libertarianism is something I call the "Tamerlane Principle." Before I explain it, consider this account of the conquests of the 14th Century Central Asian warlord and conqueror Timur the Lame, commonly known as Tamerlane:

At the news of the [up]rising, [Tamerlane] stayed his march into the mountains, and took a terrible vengeance...he showed himself to be a "hurricane of annihilation"...[H]e commanded cruelty and devastation such as made people shudder even in those cruel days...When he stormed the rebellious city of Sabzevar...he had 2,000 persons walled up alive, as a tower of horror "for a warning for all who should dare to revolt and as an indication of Tamerlane's vengeance"...The sword of the executioner made an end of the dynasty of Herat; the towns of the Sserbedars became heaps of ruin...The mountain cities, which defended themselves valiantly, were crowned with pyramids of skulls; and in the capital city...the inhabitants were put to the sword by the conqueror, "even to the centenarians, and to the baby in the cradle." Then the soldiers carried off everything "down to the nails from the doors"; and whatever was combustible went up in flames. City after city, fortress after fortress, fell into the hands of the conquerors, "until there were no more enemies left in these provinces, and no one who did not obey Tamerlane."

Delightful, isn't it? But this was something that really happened. The truth is, this sort of conquest and destruction was a regular feature of human history for thousands of years.
What would Robert Nozick say if he read that passage? He probably wouldn't see a strong connection between the conquests of Tamerlane and the question of government intervention in a modern capitalist economy. But I do. The connection is this:
Tamerlane is always over the horizon, waiting to strike. There will always be conquerors waiting for the chance to conquer and pillage the soft civilized nations of the world. If you think Tamerlane is ancient history, just look up Pol Pot, Joseph Kony, Hitler, etc. This is a recurrent phenomenon. The only thing that can protect people against the Tamerlanes of the world is a strong, economically prosperous, well-organized nation state. And the only way you get a strong, economically prosperous, well-organized nation state is to have a strong, centralized government that provides lots of public goods. Roads, ports, schools, technological R&D. You need these things because everything we know about economic development says that these things are absolutely essential for a nation to have a high GDP. And a high GDP is necessary for a nation to win wars with hypothetical Tamerlanes.
This is why modern American libertarianism is so very, very flawed. The ideology professes to value liberty above all else, but it ignores the dynamic aspect. There is liberty today, and there is liberty tomorrow. Sometimes violations of liberty today (such as an income tax) are necessary to protect the body politic from far, far, far more heinous violations of liberty tomorrow.
Most libertarians recognize this, and freely admit that defense is an exception to the "small government" rule. But an army is not going to be a very effective Tamerlane repellant without a large GDP and advanced technology to back it up. And what modern American libertarians either fail to understand, or refuse to accept, is that public goods are essential for a high GDP.
Stephen Metcalf declares that Nozick "was able to separate out a normative claim (that liberty is the fundamental value of values, and should be maximized) from an empirical claim (that the most efficient method for allocating goods and services is a market economy)." I wish that this were true, but it is not. Nozick, and his present-day acolytes, make an argument for unfettered capitalism that relies fundamentally on the empirical claim that public goods are not necessary for a strong economy. If public goods are necessary for a strong economy, then maximizing liberty requires that a government tax and spend.
Robert Nozick's radical prescription for a laissez-faire economy, if followed to the extreme, would put us in a position to be overrun by the first Tamerlane that wandered by and noticed our amber waves of grain. If you think this is a silly, alarmist statement, just observe how our recent neglect of public goods, along with our refusal to tax ourselves, is forcing us to make defense cuts (and will soon force us to make many more). This is where decades of trust in Nozick has gotten us. It's not a civilizational crisis yet, but it's not pretty.


Update: Wow, Metcalf's essay really seems to have touched a nerve. Will Wilkinson: "If only a levee separated polite discourse from the sort of ax-grinding indifference to fairness and truth Mr Metcalf displays in his essay." Reihan Salam: "Alas, I have just had the distinct displeasure of reading a critique of Nozick that is, I’m sorry to say, neither provocative nor intelligent. I wish I could get those minutes of my life back." Tyler Cowen: "I agree with Reihan that the recent web critique of Nozick, which I will not link to, was just awful." And here's Jason Kuznicki with an actual rebuttal. But so far, no libertarian bloggers, to my knowledge, have answered the Tamerlane Critique. Can I have been the first person to think of this idea? It seems highly unlikely.
Author: Noah Smith Posted at 12:38 PM