Republicans own this downgrade 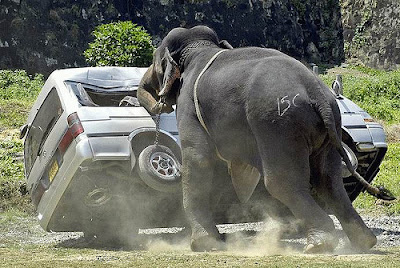 I would like to think that I am not a shill for the Democratic Party. I realize that my extreme liberalism on social issues biases me toward looking at the GOP as an enemy tribe. So whenever I find myself thinking "Dang it, there are no two ways about it, Republicans got us into this mess," I first sit down and think of all the reasons why I'm wrong

But when it comes to this downgrade and the market crashes that have followed, I just can't see any reasonable case for political neutrality. I agree strongly with Felix Salmon, Paul Krugman, Greg Ip, Menzie Chinn, Jeffrey Frieden, and James Surowiecki that the dovngrade is not about the U.S. debt level (which is not that high, given interest rates, historical precedent, and international comparisons), but about the dysfunctionality of American politics. And the dysfunctionality of American politics is all about the Republican party -"an extremist right that is prepared to create repeated crises rather than give an inch on its demands," to borrow Krugman's phrase - but also about a system riddled with institutional tripwires (debt ceilings, filibusters, etc.) that allow that minority faction to hold the rest of the government hostage. S&P - which seems to operate on intuition rather than on any kind of math or model - seems to have simply smelled the crazy fumes emanating from the Tea Party. I smell them too.

Republicans, of course, say otherwise. They claim that the downgrade is really about the level of U.S. government debt. Just for the sake of argument, let's grant them this unlikely assertion, and then let's ask the question: Who, then, is responsible for all this debt?

And although I tried my best to think of reasons why this isn't the case, I just can't avoid the answer: Republicans. The Republicans created the national debt.

Here is a graph of historical U.S. gross federal debt levels as a percent of GDP: 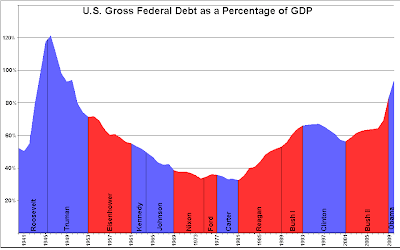 The graph is divided by presidential administration. The obvious fact is that, until the 2008 mega-recession hit, all of the increases in debt happened under Republican presidents. But the president is not a dictator, and so we should also look at a graph that breaks it down by which party controlled Congress: 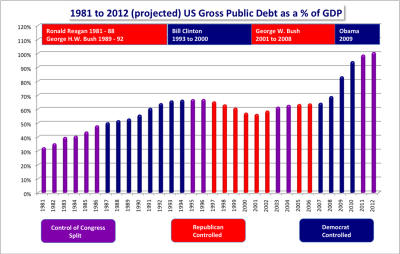 Looking at this, it's much less clear that Republicans caused the debt, since the one instance of declining debt happened under a Republican congress. So we'll have to dig deeper into the historical record to find out whether my claim is truth or hackery.

The U.S. federal debt declined pretty steadily from WW2 to 1980, at which point it began to increase pretty steadily (What changed? Answer coming up...). The period of 1981-1992 saw a near-doubling of debt, from about 34% of GDP to about 66%. This happened under two Republican presidents (Reagan and Bush I) and a Democratic congress.

What policy changes were made in the 80s? Well, income taxes went down. Here is a picture of U.S. tax revenues as a percentage of GDP: 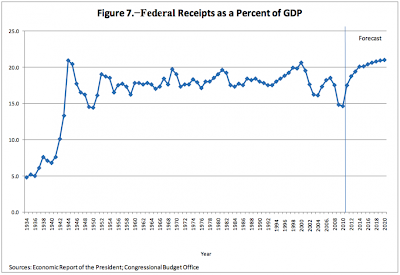 As we can see, the fall in revenue in the 80s wasn't huge - maybe 1% of GDP over the decade. This is partly because the economy grew fast enough to offset some of the tax cuts that Reagan made in 1981. But it is also because Reagan, worried that his tax cuts would lead to exploding deficits, raised taxes during the remainder of his presidency. 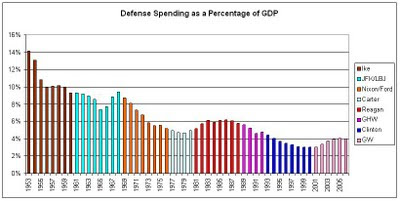 The Reagan-era  defense buildup was actually pretty small - about 1.5% of GDP over what we were spending in the Carter era.

So neither Reagan's tax cuts nor his defense buildup were particularly huge. The thing is, they were sustained.  Even a small deficit adds up over time, and sure enough, by the end of the Reagan-Bush era, our national debt was almost double what it had been at the start, despite solid economic growth for most of that period.

Caveats: Of course, as I noted before, Democrats controlled Congress during this entire era. Since Congress is the entity that votes on the budget, shouldn't I be blaming the Dems? Or at least dividing the blame equally? Well, there are two reasons why I place the lion's share of the responsibility on Reagan. First of all, lower taxes and increased defense spending were Republican priorities, not Democratic ones. Basically, Reagan got his way! And second of all, federal non-defense spending (as a percentage of GDP) took a sharp dip in the 80s, and only recovered to its previous level by the end of Bush I's term. So even if Dems wanted an increase in domestic spending in the 80s, they didn't get one. "The beast" didn't exactly starve, but it went on a diet. So again, Reagan seems to have got what he wanted despite the Democratic-controlled congress.

I conclude that  Republican presidents, and not Democratic legislators, were responsible for the 1980s debt runup.

But - and this is more guesswork on my part than hard fact - Reagan seems to have done more than just boost the debt during his term. By shifting us from an era of steadily falling debt numbers to steadily rising ones, he seems to have created a political "new normal" - a green-light to future U.S. politicians to continue the debt binge. Don't take my word for it - this idea came straight out of the mouth of Dick Cheney. In the jargon of public finance, Reagan shifted us from an AGV mechanism (balancing budgets by taxing the rich) to a Groves-Clarke mechanism (running deficits in order to please everybody). And since Reagan was a Republican, it seems only natural that the GOP would be more eager to embrace the new, debt-fueled politics - it was the party's new road map to victory.

But the bill passed, and it worked. The rise in debt was halted (see graph above). In the latter half of the 90s, the new higher tax rates and lower spending rates were maintained even as economic growth accelerated, leading to a fall in gross federal debt back to below 60% of GDP. A Democratic president and congress therefore seem responsible for the brief drop in debt levels that occurred during the 90s.

Caveat: Congress, however, was controlled by Republicans from 1994-2000. These Republicans attempted to slash federal spending; their effort was blocked by Clinton in the government shutdown of 1995. It is easily possible that, if Clinton had allowed these spending cuts to take place, debt would have fallen by even more than it did. It is even possible that such a victory would have led Republicans to conclude that spdnding cuts were a viable path to electoral success, and relied on spending cuts instead of the mix of tax cuts and spending increases that Bush II eventually implemented. We'll never know.

Caveat 2: The rise in GDP during the late 90s is sometimes attributed to Clinton's policies (including the 1993 deficit reduction), but Clinton himself attributes it to luck. So while Clinton should get the credit for halting the long debt climb of the Reagan-Bush I years, by his own admission he should not get the credit for the fall in debt that followed. Nobody should.

The 90s made a lot of people think that the debt rise of the 80s had been a one-time thing, and that we would hold steady around 60% of GDP, a manageable number. The 2000s proved them wrong. As you can see from the above graph of tax revenue, Bush II's tax cuts were truly enormous - over 5% of GDP. These were passed by a Republican congress. And spending rose strongly during Bush II's tenure, on both defense (wars and homeland security are not included in the above chart), and on entitlements (Medicare Part D). As a result, debt began to rise again, hitting the low 60's in 2007 before the big crash and recession.

Again, we saw debt rising as a percent of GDP during an economic expansion under a Republican president who got most of what he wanted from Congress.

Caveat: Bush tried to balance out the Medicare expansion with a large stealth cut in Social Security payments ("privatzation"). This was blocked by Democrats. Democrats could possibly have allowed Bush to shift entitlement spending from Social Security to Medicare instead of raising it overall, but they chose not to. So Democrats bear some of the responsibility for Bush's deficit increase.

Despite the raft of tax cuts enacted as part of Obama's 2009 stimulus bill, the fall in GDP from the recession was so large that taxes have risen as a percentage of output. Spending, however, has risen even more, mostly due to automatic stabilizers - unemployment insurance and the like - rather than to active policy choices on the part of government. Also, to truly measure the impact of a regime's policies, one ought to compare the beginning and end of the regime, and Obama's presidency (and the current divided congress) isn't over yet. So I will reserve judgment on who bears responsibility for the runup in debt that has occurred since 2008.

Note that this debt runup, unlike the ones under Reagan, Bush I, and Bush II, has occurred during an economic contraction (where the GDP denominator is shrinking), rather tan during an expansion (when debt should logically fall as a percent of GDP). That is very important.

But even if you were to follow the pure Republican party line and blame all of the increase on Obama, note this: Debt is now approaching 100% of GDP, which is over the 90% level that Kenneth Rogoff like to talk about. If the Reagan-Bush I debt runup had not occurred, we would only be at 70%. If the Bush II tax cuts had not occurred, we would probably be around the same level or slightly higher. If neither Republican debt binge had occurred, anyone who tried to question U.S. solvency would be laughed out of the room.

So this is why, even if for some reason we chose to willfully ignore the fact that the S&P downgrade is about nutty Tea Party Republicans and broken U.S. institutions rather than about debt levels, we would still have to conclude that it was the GOP brought us to this point.

As do the 50% or so of Americans who voted for those Republicans.
Author: Noah Smith Posted at 11:25 AM