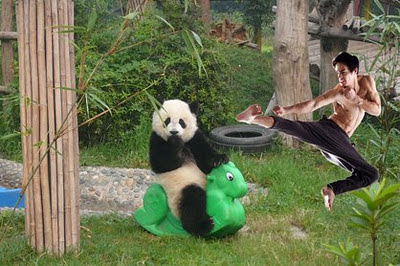 Two things I don't understand. The first is why people think pandas are so unbearably cute. They're not bad, but I think they are out-cuted by most bears out there, including polar bears, brown bears, and maybe even black bears. Who's with me?

The second thing I don't understand is why opponents of attempts to "get tough" on China's currency policy - call them the Panda Knights - are comfortable with simplistic arguments and hand-waving dismissals. I realize that "free trade" is one of the few issues on which economists have allowed them to think they have a consensus over the past half-century. And I also realize that trade wars are scary in a geopolitical sense, regardless of the economics. But that is no reason to ignore the serious scholarly research that supports the idea of getting tough with China, or to assume that Congress' attempts to do so constitute political pandering.

One example of this sort of analysis is Michael Cohen's recent piece in Foreign Policy magazine, entitled "Panda Mugging." Here's the economic argument:


[A stronger yuan] would likely lead jobs to trickle to other low-wage countries rather than back to the United States -- a phenomenon that is already taking place as labor costs in China are on the rise.

There are theoretical reasons to believe that this is an oversimplification, and may just be flat-out wrong. Suppose the dollar appreciates against the yuan but not against the Indonesian rupiah, and that low-wage manufacturing jobs simply migrate from China to Indonesia. Suppose that the loss of those low-wage manufacturing jobs in China precisely cancels out the increased purchasing power of the stronger yuan, so that China's imports from the U.S. remain unchanged. But Indonesia will be richer, because it has gained jobs! And higher Indonesian incomes, at the same dollar/rupiah exchange rate, will mean Indonesia will buy more goods and services from the U.S., boosting our exports and creating jobs in the U.S. End result: Good for America, good for Indonesia (and neutral for China).

The lesson here is that trade-weighted exchange rates are what matter. And in fact, it may be the case that other export-dependent countries keep their own currencies artificially depressed to maintain competitiveness with China, even though this forces them to acquire crappy dollar assets as government reserves. If the yuan were to get stronger, these countries would also probably feel free to let their own currencies appreciate, lowering the cost of American exports all over the world, and creating even more jobs here.

This is not rocket science. Basic economics says that price controls are inefficient, and the yuan/dollar peg is the world's biggest price control.

But don't take my word for it. Some very smart people have done serious scholarly research in this area. Take Menzie Chinn (of Econbrowser fame), whose detailed statistical analyses conclude that a rise in the value of the yuan would be good for everyone involved. Or watch Paul Krugman, a lifelong trade economist, explain the intuition. These guys cannot be dismissed with a hand-wave or a shout of "protectionism".

Anyway, here is Michael Cohen's argument why the yuan bill, now stalled in Congress by the Republican House leadership, is mere political theater:


In a way, it's surprising that it took this long for Congress to get around to making China a scapegoat for the continued U.S. downturn. After all, finding a foreign bogeyman at a time of domestic economic dissatisfaction is hardly unusual. In the 1930s, it helped spur passage of the Smoot-Hawley tariffs; in the 1980s and early 1990s, economic fears -- and high-profile investments by Japanese businesses, like the purchase of Rockefeller Center -- led to a round of Japan-bashing in popular culture and the media...

But for all the bipartisan panda-mugging going on, it's unclear that the American people are buying it quite yet. According to a recent poll by the Pew Research Center, when given an option of "getting tougher with China" or "building a stronger relationship," voters supported the latter by a 53-40 margin. Even though all but five members of the Senate Democratic caucus voted for this week's currency bill, only 32 percent of Democratic voters want to see a get-tough approach to China.

The seeming contradiction here - why would China-bashing be a good political strategy if it went against majority opinion? - implies that there is some narrow special-interest minority that is pushing both Democrats and Republicans toward a trade war. But who would that minority be? American manufacturing interests? Seems unlikely, given how much manufacturing has shrunk as a percentage of our economy during the past few decades. Unions? Ha.
In fact, it seems to me that the special-interest groups that matter are lining up against the currency bill. U.S. multinationals made record profits in the 2000s as American incomes stagnated; this increase in the "capital share of income" was made possible by the dumping of a huge, capital-poor Chinese labor force onto the global markets, making workers less scarce and capital more scarce. But that effect was exaggerated by the yuan peg, which made Chinese labor even cheaper and American capital even more expensive. Thus, it is no surprise that multinationals are putting big pressure on John Boehner to keep the currency bill from reaching the House floor; up til now they have been receiving a bigger and bigger share of an American pie that is now shrinking, and a stronger yuan might remove that lifeline.
So I am not sure why opponents of a "get tough" China policy are so cavalier about the strength of their arguments. It's not that there are no good arguments against getting tough. After all, tariffs might not budge China from its mercantilist currency stance, and the resulting trade war might very well turn into a lose-lose for both sides. Getting tough is therefore risky. But I think that the valiant Panda Knights are a little too solicitous of their fuzzy friend when they claim that the yuan peg itself is no big deal, or that Congress is in the pocket of nefarious protectionist special interests.

Ryan is right that Chinn definitely does hedge his bets. But, reading Chinn's post, I take away a very different message:

The fact that yuan revaluation would not necessarily have a large impact on job creation (for that we need vigorous and immediate expansionary monetary and fiscal policy) does not mean that it wouldn’t be a (very) good thing, however...[A]ccelerated yuan appreciation would be a good thing, in that it would facilitate global adjustment of current account balances, as well as the transition to a new development model for China. Paul Krugman has forcefully argued that accelerated yuan appreciation would help US employment, based on work by Autor, Dorn and Hanson (2011) (discussed in this post), and I'm willing to be convinced.

Chinn then goes on to link to a paper of his that finds that the Chinese trade balance does respond to exchange rates in the logical fashion.
Avent goes on to repeat the strongest Panda Knight argument, which is that trying to muscle China into changing their policy is a dangerous game. I've never disputed that. I'm only arguing that in their zeal to stop America from launching a trade war, Panda Knights often rely on hand-waving arguments. If and when the currency issue becomes the focus of increased public and intellectual attention - as it soon may if Mitt Romney wins the Republican nomination - their willingness to throw the kitchen sink at their opponents may not help the Panda Knights' credibility.

Update: Ryan's co-blogger gives a welcome reminder that yuan appreciation would be great for the vast majority of Chinese people, and it is only the narrow interests of well-connected exporters that keep this from happening. When you see the Panda Knights post pictures of poor sad pandas in cages, ostensibly supposed to represent China's suffering at the hands of the U.S., recall that the people benefiting most from the yuan peg are China's 1%, not its struggling hard-working masses.
Author: Noah Smith Posted at 7:23 PM