"Industrial Complexes" and the Great Relocation 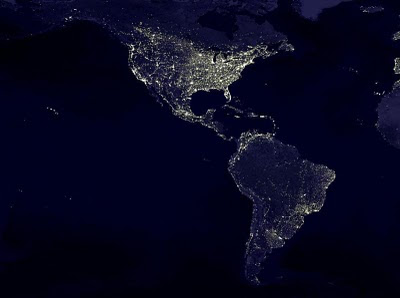 Paul Krugman created the theory that inspired my Great Relocation idea, so perhaps it's natural for him to invoke it regarding Congress' latest attempt to get tough on China's currency policy. But in any case, I am really glad to see him bring it up:

I though I should offer a brief note about one of the arguments people make against focusing on Chinese currency manipulation — namely, the claim that China doesn’t really compete head to head with US manufacturing, so that a rise in the renminbi wouldn’t help.

I’d argue that this is wrong...

[T]here are real effects on the US if production moves, say, from China to Mexico. To an important extent, global manufacturing is carried out by regional complexes — an Asian complex centered on Japan and China in effect competes with a North American complex in which labor-intensive stuff is done in Mexico or Central America. So there’s an indirect competitive effect.

This is exactly the Great Relocation story. An "industrial complex" is a cluster of suppliers that represent different levels in a value chain. Transport costs, broadly defined - including costs from the necessity for face-to-face contact with customers, the ability to hire people away from one's competitors, and local knowledge spillovers - are minimized when all the firms locate close to one another. This is what creates industrial clusters.

Look around the world, and you will see that industries tend to cluster. Electronics is centered in East Asia. Business services and software are centered in India and on the U.S. West Coast. Finance is in Britain and on the U.S. East Coast. Heavy industry is in Germany. Not exclusively, obviously, but the clusters are real.

These clusters raise productivity, by minimizing (broadly defined) transport costs. If I am a builder of televisions, it makes sense to locate in Japan or Korea, because there I will be close to many high-quality television parts suppliers. And it also makes sense for me to locate in Korea or Japan, because the existing cluster of TV manufacturing in that region provides me with a pool of knowledgeable employees to hire away from my competitors. And even if I don't hire them away from my competitors, they will meet my own employees in bars, and at trade associations, and socially, and they will exchange ideas (read Annalee Saxenian's Regional Advantage to find out why this was important in the development of Silicon Valley). All of those things increase both my productivity, the productivity of my suppliers and customers, and even the productivity of my competitors. In other words, the entire cluster gets a productivity boost from being a cluster. And high-productivity firms defeat low-productivity firms.

So what Krugman is saying is that the Chinese currency policy is holding Latin America back from developing its own industrial clusters. And that is indirectly holding back American manufacturing, because Latin American clusters are going to have more exchanges of products, ideas and people with the U.S. than clusters in East Asia.

Which is why one way of fighting the Great Relocation is to fight China's currency policy. Natural forces will eventually make densely-populated East Asia the world's high-tech biggest manufacturing hub. But there is no reason we should let Chinese government policy speed up that transition.
Author: Noah Smith Posted at 9:27 PM