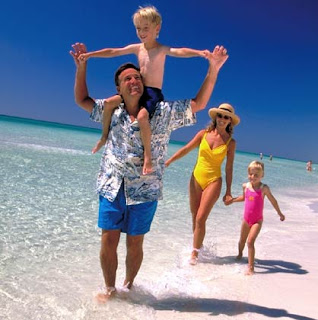 Two posts back, I explained why the "Great Vacation" idea doesn't pass the smell test. If U.S. unemployment had been caused by a negative shock to labor supply, we should have expected to see an increase in real wages.

Casey Mulligan, one of the leading proponents of the Great Vacation story, responded on his blog:

A number of bloggers have recently discovered real wages as a labor market indicator. They are at least 3 years late to the party.

Three years ago I blogged about the effect of labor supply on real wages.

I noted how real wages had risen since 2007, and predicted that they would begin to decline in 2010.

I have continued to update this work, eg here, and here.

The fact is that the real wage time series fits my recession narrative very well.

Well, in response to that, let's look at the numbers. Here, courtesy of FRED, is a graph of real compensation per hour in the nonfarm business sector: 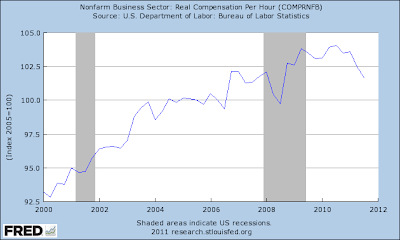 A negative shock to labor supply should be associated with a spike in real compensation per hour. Looking at this graph, do you see such a spike? I do not. In fact, if I were to tell you that there had been a Great Vacation, and asked you to point out its beginning on that graph (without showing you the gray bars), you would probably say that it began in 2003, or maybe 2006 or 2009. You would not predict that a supply-driven recession began in 2008, when our real recession actually began.
Yes, it is true that real wages rebounded fairly rapidly from the trough to which they fell at the beginning of the Great Recession. And it is true that they climbed slightly higher after that, in 2009, reaching a peak about 2% higher than their 2006 peak. So Mulligan's statement that real wages rose during the Great Recession is correct.
However, note the size of the rise. There is no discernible increase in the rate of growth of real wages during the Great Recession. The wage growth to which Mulligan refers was slower by far, for example, than the growth that occurred between 2000 and 2004. If the Great Recession were caused by a massive negative labor supply shock, we would expect to see wages accelerate as employment fell. They did not. And the sharp downward spike in real wages in 2008 is especially hard to reconcile with a Great Vacation story.
I maintain my original case that the wage data shows no sign of a Great Vacation. If a Great Vacation in fact occurred, it had to have been a much more complicated sort of thing than the kind of negative labor supply shock that is taught in Econ 101.
Author: Noah Smith Posted at 6:00 PM