Conservatism: Always at war with some part of America 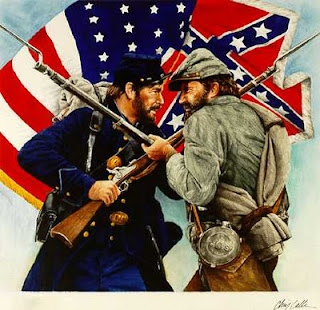 More catch-up blogging...I'm overdue for a broadside against the conservative movement, so here goes.

Many people think of the conservative movement as basically nationalist. Think of a guy with an American flag decal on his truck. But I guess I've always seen the American conservative movement in a very different light - as a factionalist movement, concerned more with the balance of power within America than the strength of the country overall. (Naturally, this paints the movement with too broad a brush, but we'll get to that.)

As examples, take George Will and Rick Santorum. Here's George Will, in a recent New York Post column:

Imagine what a horror 2011 was for progressives as Americans began to comprehend their stunning abundance of fossil fuels...environmentalism as the thin end of an enormous wedge of regulation and redistribution is a spent force...Meanwhile,...sales of the electric-powered Chevrolet Volt were falling short of General Motors’ goals even before reports about fire hazards in crash tests. A Wall Street Journal headline proclaimed: “Americans Embrace SUVs Again.”

Why is George Will saying that General Motors' loss is a good thing for America? You'd think that a patriotic conservative - not to mention one who stands behind the business community - would want to see an American company's investments pay off. But George Will is cheering the failure of the Chevrolet Volt.
The reason is that the failure of the Volt represents not just a loss for GM, but a loss of face for a subset of Americans whom Will despises: environmentalists, whom Will thinks are merely crypto-socialists. The success of a product whose benefit is energy efficiency would lend credence to the claim that energy constraints are real; hence, in Will's mind, it is a good thing for us to spend more on energy just to prove that we have energy to waste. For this type of conservative, the Good Americans are those associated with the energy industry, and the Bad Americans are environmentalist crypto-socialists.
Or take Rick Santorum's statement on blacks and welfare:

At a campaign stop in Sioux City, Iowa on Sunday, Republican presidential hopeful Rick Santorum singled out blacks as being recipients of assistance through federal benefit programs, telling a mostly-white audience he doesn’t want to “make black people’s lives better by giving them somebody else’s money.”

The idea that all government spending is racial redistribution is so common on the right, and so widely accepted, as to be almost not worth saying out loud. I can't tell you how many times I've encountered this idea in conversations with conservatives. And pretty much every conservative rant against government spending, in the popular press or in stump speeches, is a dog-whistle for this very idea. For this type of conservative, the Good Americans are hard-working whites and the Bad Americans are lazy blacks living off the government teat.
Of course, as an aside, both of these worldviews rely on claims for which there is little factual support. George Will cites the fact that America is now a net exporter of petroleum products, but that figure is for refined petroleum products only - if you include crude petroleum products, we still have a monster deficit. Closing our eyes and wishing really hard that we were Saudi Arabia is not, and will never be, a viable strategy for national prosperity. As for Santorum, he ignores the fact that a disproportionate number of the people on food stamps are white (84%, compared to about 80% of the populace).
Naturally, the facts are irrelevant to these factionalists. Factionalists imagine themselves to be part of a tribe, and tribal knowledge beats actual knowledge nearly every time.
I believe that this factionalism is hurting our nation, by paralyzing the political process and by reducing government investment to a below-optimal level. This is the main reason I am so strongly opposed to the American conservative movement. Naturally, liberals have been factionalist at times as well, but the strength of the conservative tribal consciousness - especially with regards to race and the "racial redistribution" worldview - is just much greater right now than anything on the left.
But there is hope. I've been reading articles by conservatives like Reihan Salam, Ramesh Ponnuru, and Peter Thiel that have a much more nationalist flavor, including greater support for government investment (and I've seen hints that Bill O'Reilly has started to think along these lines as well). Our current tendency toward factionalism grew out of the long period of peace and plenty between World War 2 and the Bush years, when the only real question was how to divide the American pie. With the lost decade(s) and the waning of American power, it's becoming more painfully clear to people on both the right and the left that factionalism is nothing more than a crippling distraction. But old habits die hard, and the poisonous notion of Good Americans vs. Bad Americans is still the right's dominant paradigm.
Author: Noah Smith Posted at 3:21 PM