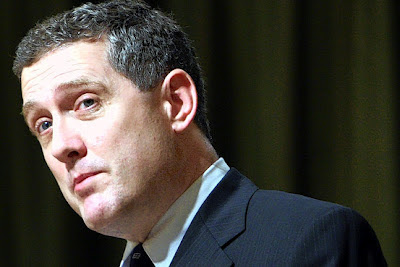 Sometimes I skim stuff too fast. When I saw David Andolfatto and Tyler Cowen linking to a Jim Bullard speech about wealth effects and output, I assumed that it was some sort of observation about aggregate demand. After all, wealth affects aggregate demand, so when wealth evaporates in a financial crisis, AD should fall. No surprise there.

But then, via Scott Sumner, I found out that Bullard (the president of the Federal Reserve Bank of St. Louis) is saying that wealth shocks affect long run aggregate supply!

What?!?!?!
Intuitively, this makes absolutely zero sense. Permanent negative wealth shocks lower potential output? Well, if capital is destroyed, that's true; for example, take the effect of World War 2 on Japan and Europe. All those bombs certainly lowered productive capacity (while destroying wealth). But if the financial crisis was that sort of thing, then it should raise the trend rate of growth, as we engage in "catch-up growth" to replace the destroyed capital.
Are we seeing rapid catch-up growth now? No.
So how does Bullard think this works? Is he putting forth a subtle and powerful argument that I missed by skimming? Let's see what he say in his speech:

A better interpretation of the behavior of U.S. real GDP over the last five years may be that the economy was disrupted by a permanent, one-time shock to wealth. In particular, the perceived value of U.S. real estate fell substantially with the 30 percent decline in housing prices after 2006. This shaved trillions of dollars off of the wealth of the nation. Since housing prices are not expected to rebound to the previous peak anytime soon, that wealth is simply gone for now. This has lowered consumption and output, and lower levels of production have caused a significant disruption in U.S. labor markets.

The negative wealth shock lowers consumption and output. But after the recession ends, the economy simply grows from that point at an ordinary rate, neither faster nor slower than in ordinary times. It is more like an earthquake which has left one part of the land higher than another part. There is no expectation of a “bounce back” to a higher level of output after the recession ends.

Huh. I just can't make heads or tails of this idea. It seems to fly in the face of all the most basic intuition macroeconomists possess regarding growth.
Issue #1: A decline in housing prices is not a decline in the stock of productive capital. Houses are mostly consumer durables. A fall in housing prices leaves us with the same number of actual houses as before the crash; yes, that will have supply effects via geographic clustering and relocation costs, but there's no reason to think that these effects are dominating what we see in the economy.
Why does a decline in housing prices leave our economy able to produce less than before? It doesn't seem like it should.
Issue #2: A permanent negative shock to the stock of productive capital, as I mentioned earlier, will lower potential output, but will raise the rate of growth due to the renewed possibility of "catch-up" as we build back up to our old capital/labor ratio. Think of Japan after World War 2. In other words, there should be a "bounce back," directly counter to what Bullard is saying.
So, basically, what we have here is Bullard saying that the neoclassical (Solow) growth model - and all models like it - are wrong. He's saying that a change in asset prices can cause a permanent change in the equilibrium capital/labor ratio.
That is not "crazy talk," necessarily, because it is at least conceivable that the Solow model - and hence, most growth theorists working today - might be completely wrong. But Bullard is going to have a hard time convincing the profession of that. And note that Bullard's contention would also invalidate all business cycle models of the "RBC" type, since those models are based on the neoclassical growth model. Even more deeply, what Bullard is saying is directly counter to our most basic notions of what "capital" is.
For more Bullard critiques, see Scott Sumner and Matt Yglesias, who have already made some of these points.
Bottom line: "We're not as wealthy as we thought we were, and hence we are choosing to buy less stuff" is an argument about aggregate demand, and it is an argument that many people accept. However, "We're not as wealthy as we thought we were, and hence we are able to produce less stuff" makes no sense in the context of any economic theory I know of. Bullard has some serious explaining to do if he wants us to believe the latter.
Author: Noah Smith Posted at 2:58 PM