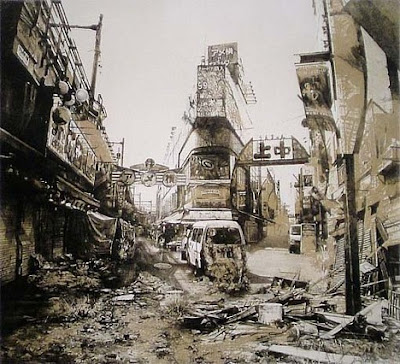 For anyone who is interested in the Japanese economy, the recent paper by Takeo Hoshi and Takatoshi Ito is a must-read. Basically, it says that the days of Japan's seemingly infinite capacity to increase its national debt are numbered.

Everyone knows that Japan sustains its unprecedented national debt by borrowing money from its own people. The willingness of Japan's private sector to lend near-infinite amounts of money to the government at a pittance of an interest rate is legendary.

What Hoshi and Ito do is this: They assume that Japan's current government deficits, current GDP growth rates, and current savings rates will basically be maintained. Then they simply calculate the time when ALL of Japan's private wealth will be held in Japanese government bonds. Beyond that point, Japan will only be able to finance its deficits by borrowing money from foreigners, which of course will instantly push interest rates up to the point where Japan is forced to default. Under all of the scenarios, doomsday comes before 2023. Of course, that is making some very extreme assumptions, i.e. that government borrowing crowds out all other borrowing and that Japan's private sector demand for government bonds does not falter.

The upshot: Unless it balances its budget, Japan will start borrowing from foreigners in the next decade.

So there are three questions that follow, in my mind. The first is: Who is buying Japanese government bonds, and why? The second is: Why can't Japan balance its budget? The third is: "What will happen if Japan has to borrow from foreigners?" To answer these questions, I asked some Japanese econ professors what they thought. What follows is a distillation of facts that they gave me about the Japanese economy, some but not all of which can be verified by looking at official statistics.

On the question of "Who is buying Japanese government bonds, and why?", the answer appears to be: Pension funds, insurance companies, and regional banks. This answer is slightly different, though not hugely different, from the answer I gave when I blogged about the topic last year.

Japan's private individuals, who previously bought a lot of bonds with their non-pension savings, hold a lot of JGBs but are not buying any new ones. Partly, this is because Japan's household savings rate has dropped to near zero (which itself is partly due to rapid aging). Partly, it is because - all talk of "culture" to the side - people are just not that interested in holding such a low-yielding asset.

Pension funds and insurance companies, however, are a different story. The Ministry of Finance apparently has much more leverage over these guys, and basically forces pension funds to put households' savings in JGBs. But you may ask: Why don't workers demand that their funds invest in something higher-yielding? And here is what a professor told me:

In Japan, you can't do that!! In America, workers have a say in what asset classes their pensions go into. In Japan, this is apparently not the case. A 22-year-old entry-level worker, who really should have all of his money in global stocks, has absolutely no ability to stop his pension from putting all his money into low-yielding Japanese government bonds. Nor can he simply withdraw his pension early; apparently that is also not allowed in Japan. I am not 100% sure I believe that Japanese pensions work like this, but this is what people insist is true. If they are telling me something wrong, please let me know.

If true, this is "financial repression" at its worst. Japan's decrepit government is only keeping itself afloat by confiscating the savings of its hard-working populace. Some of these workers are staying in the office until late at night, only seeing their families one day a week, not even getting paid for the overtime...and their pensions are being confiscated by government pressure on fund managers.

So that answers that question. Next up is the question of why Japan can't balance its budget. I mainly outsource this answer to Yuriko Koike. Japan used to waste untold billions on pointless construction projects (concreting over every riverbed in the country, for example), but after a decade of cuts, that sort of thing now accounts for only about 5% of the budget.

The real problem is this: Japan has European-style health care with American levels of taxes. If you're going to pay for universal health care, you need high taxes, and Japan does not have them. With an aging population raising health care costs, Japan is going to have to either eliminate universal health care (ha!), or raise taxes a lot to balance the budget. Taxes have been raised, with the national sales tax recently going from 5% to 10%. But that change doesn't kick in til 2015, and won't put a particularly big dent in the deficit. Meanwhile, the tax hike was only popular because of the brave actions of a prime minister who will likely be fired as a result. Japan's populace, tired of working themselves to the bone and seeing their savings be stolen by pension funds, appear to be engaging in a full-fledged tax revolt.

So it seems unlikely that Japan will balance its budget. And Hoshi and Ito show that Japanese private investors, captive as they are, will soon have their backs broken by the sheer unbearable weight of government debt. So when Japan's government goes hat in hand to foreigners in the next decade, what will happen?

If Japan has to sell JGBs to rich countries, it's game over. No one will accept such low yields with such high default risk. The only investor who might buy the requisite amounts of JGBs is China. China, facing pressure from the U.S. to stop supporting exports by buying Treasuries, might turn to JGBs as an alternative mercantilist strategy. The idea would be to hold down the yuan against the yen, inducing Japan to buy a bunch of Chinese exports. This would be insanely expensive for China, but would give China de facto political power over one of its biggest geopolitical rivals.

So I see the following possible scenarios for Japan:

2. A default in 10 years, after Japan's private investors become totally tapped out.

3. A delayed default, but Japan becomes a client state of China in perpetuity, as China loans Japan's government the money it needs to stay afloat.

7. Hyperinflation, as Japan's government pays off its debt by seigniorage.

(Actually, there is another scenario: Nightmare Socialism. Savings rates continue to rise, instead of falling as old people retire; more and more savings are hurled into JGBs, as the populace impoverishes itself to postpone default indefinitely. I didn't give this scenario a number because it's a little silly, and would represent an enormous and sustained reversal of many existing trends.)

I think Scenarios 1 and 2 are the most likely, though 5 is also possible. What do you think?
Author: Noah Smith Posted at 10:52 PM