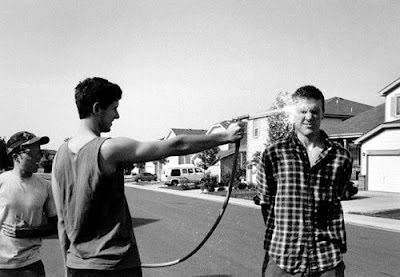 The Communist movement in early 20th century Europe became famous for its atmosphere of insane paranoia, unrelenting suspicion, and constant ideological purges. The above quote is from a novel, but the man who thinks it was a real historical figure, whose paranoiac purges killed 500 of his allies in the Spanish Civil War. I suppose it was unsurprising that the left lost that war.

Since 2009, the macroeconomics profession has been embroiled in another sort of war. At stake is not just the direction of policy, but the entire future of the discipline. The insurgency has been led by Paul Krugman, a Nobel Prize winner, Princeton professor, and New York Times pundit, and by other eminent economists like Brad DeLong whose accomplishments (in my opinion) are only slightly less august. I say "led" not because Krugman et al. were the first to poke holes in modern macro - that was mostly done in the 1990s and involved many other brilliant people - but because it was the prestige of Krugman, DeLong, and others that gave this revolution public credibility, that made the intelligent, news-reading public sit up and say "Hmm, maybe something is deeply wrong with macroeconomics!"

Steve Keen is a "post-Keynesian" economist who works in Australia. His work, although I have only read a bit of it, is largely about debt, and why debt behaves differently than it does in most mainstream macro models (an idea to which I am very sympathetic!). In public, Keen has been highly critical of neoclassical macro, and supportive of a return to the ideas of Depression-era thinkers like Keynes and Minsky; he writes a blog, and also attends INET (I actually met him last year, though I only spoke to him very briefly).

One would think that Keen would be a natural ally of Krugman and DeLong. However, one would be wrong. In fact, Keen recently unleashed a tirade against DeLong:


I can scarcely believe what Brad Delong has dared to publish on Project Syndicate today...

[P]eople like Wynne Godley, Ann Pettifors, Randall Wray, Nouriel Roubini, Dean Baker, Peter Schiff and I had spent years warning that a huge crisis was coming, and had a variety of debt-based explanations as to why it was inevitable...

To my knowledge, of Delong’s motley crew [of economists who saw the potential for a crash], only Raghuram Rajan was in print with any warnings of an imminent crisis before it began...Krugman, who Delong crowns as first amongst equals in those working “in the tradition of Walter Bagehot, Hyman Minsky, and Charles Kindleberger” first read Minsky in May 2009–and noted that he didn’t really see what all the fuss was about...

The only excuse for the cant Delong has spewed forth today is that, as with Krugman and others in the self-described “New Keynesian” camp, he perceives himself as being at the left end of the economic spectrum, with the only competition being from the far right represented by the purist Chicago version of Neoclassical economics. Since the Neoclassical left supports deficit spending during a Depression, while the right supports austerity, to Delong it’s game over, and the Neoclassical left is right.

The reality is that there is an entire other dimension of economists who have known for decades that both extremes of the Neoclassical economic axis were neither left nor right, but plain bloody wrong. We also knew that our criticisms of the Neoclassicals had no chance of being listened to by the public until a major crisis hit, and we also expected that this crisis would do nothing to alter their own beliefs. Delong’s delusional mutterings today confirm it.

I find Keen's rant completely unacceptable. And not just because it's uncivil, rude, and largely free of substantive content. No, the reason I find it unacceptable is that this sort of ideological purge is the kind of thing that loses revolutions.

Keen's tirade can be boiled down to the following: "I got things right long before Krugman and DeLong, so I'm the pure Keynesian; these other guys are posers." By this logic, no one can join a revolution unless they were part of it from the beginning.

DeLong and Krugman were not part of the revolution at the beginning. DeLong, in particular, has made this abundantly clear, along with the reasons for his change of mind, in an essay called "What Have We Unlearned From Our Great Recession?":

My role here is the role of the person who starts the Alcoholics Anonymous meetings.

My name is Brad DeLong.

I am a Rubinite, a Greenspanist, a neoliberal, a neoclassical economist.

I take my task to be a serious person and to set out all the things I believed in three or four years ago that now appear to be wrong.

When I read this essay, I was amazed. I can't think of anyone else who writes things like this. Most economists - indeed, most people of any stripe - first stake out a position, and then defend it to the death. If they change their ideas, they try to pretend that they had these ideas all along and had never been wrong. Proving that they are Wise Sages is more important than actually searching for the right answers. Brad DeLong is different.

(Update: And you know what else? Before the crisis, the real state of things was probably not as clear to an impartial, rational observer. It could well be that an honest, open-minded, smart person would have seen the potential for a crisis before '08, but not been certain that a crisis was overwhelmingly likely...but I digress...)

(Update: And while we're at it, I should point out that Brad DeLong is totally exaggerating the degree to which he was wrong before the 2008 crisis. In the late 80s and early 90s, along with Larry Summers, Andrei Shleifer, and Robert Waldmann, DeLong invented "noise trader models" of financial markets, which present one of the first coherent, mathematical alternatives to efficient-market theory. So DeLong was attacking the neoclassical paradigm successfully, in mainstream economics and finance journals, decades before the Crisis of 2008.)

But this is not enough for Steve Keen. He demands that the revolution be led by the people who were in on it first. He seems interested more in jockeying for prestige within the revolutionary movement than in actually seeing that movement succeed. Because by shooting DeLong and Krugman in the back, Keen is attempting to discredit (and succeeding in alienating) two of his most potent allies. Without the support of leading figures like Krugman and DeLong, the anti-neoclassical revolution, right as it may be, will remained confined in the public's mind to the realm of fringe movements and cranks. (Also, frankly, exiling Krugman and DeLong would deprive the post-Keynesian movement of much-needed intellectual firepower; whatever their past mistakes, these guys are very very intelligent).

Here's the bottom line: You can bask in the hipster underground street cred of being a "heterodox" outsider, or you can actually change the world. I am on board with the anti-neoclassical revolution (as you can verify here, here, here, here, here, here, here, here, etc.), but I am not going to take Steve Keen seriously if he is mainly interested in purging the ranks of his own comrades. First you win the revolution, then you jockey for position. Get it straight.

Update: Steve Keen drops by in the comments section. Excerpts:


Firstly Noah, I'm interested in achieving a dialogue. My rudeness was a deliberate tactic since Neoclassical economists have ignored seventy years of attempts to critically engage with them by Post Keynesians.

Well, it is true that being rude (and then being nicer later) is an efficacious and perfectly legitimate way of getting noticed. Still, I feel like the effect of saying things like "self-serving drivel" is just going to have the effect of starting a permanent feud...


Now if you, Krugman, deLong, etc are actually willing to listen to what Post Keynesians like me are arguing (Mark Thoma already appears to be open to dialogue), then let's organise a joint seminar where we can set out both our differences and our similarities.

This idea I like a lot. I felt that INET had some flavor of this. YES. There should be this sort of interchange!


And thanks for the laugh about me leading a purge. I suggest you look around you: how many Post Keynesians are in your economics department? How many Post Keynesian subjects are there in its curriculum. The purge happened long ago when non-Neoclassical topics were driven out of the teaching canon--ask Phillip Mirowski at Notre Dame what a real purge feels like.

Well sure. But a purge of the revolutionary movement is still a purge. Calling Krugman and DeLong "neoclassical" is like when Ludwig von Mises called Milton Friedman a Communist. It just dilutes the power of the term. Krugman has been bashing DSGE in the New York Times for years now. He's called the Rational Expectations revolution a failure. DeLong has less of a bully pulpit but says much the same. If they are "neoclassicals" I'm a Scientologist!
Author: Noah Smith Posted at 3:15 PM