A Nobel for economics that really works 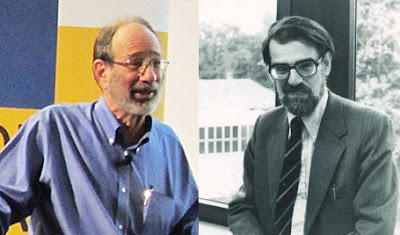 Out here in the blogosphere, it is common to hear things like the following:

1. "Economics doesn't work; it has no practical applications."

I have some sympathy for these viewpoints. But economics is a very broad discipline, and I think there are many cases in which these criticisms couldn't be more wrong. There are cases in which economics works, in which it does discover "laws", and in which difficult math is absolutely essential. For example, consider the theories that won the Economics Nobel Prize this week.

The prize, given to Lloyd Shapley (who, by the way, spends his summers at Stony Brook) and to Alvin Roth (who was recently hired by Stanford despite being commonly cited as working for Harvard), was awarded for the invention of Matching Theory. Matching Theory is basically an algorithm - a mathematical technology - for finding optimal matches between pairs or groups of people. It incorporates human preferences, optimization, and strategic behavior, so it is economics. Alex Tabarrok gives a great introduction to the theory in this blog post.

I would like to point out some things about Matching Theory:

1. It is testable, tested, and correct for a very broad class of situations. There are many situations in which the theory makes predictions about when matching will be stable. As Tabarrok points out, these predictions have been confirmed in a number of real-world situations (and, I am sure, in controlled experiments as well).

2. It is practically applicable. Implementing the algorithms designed by Al Roth has resulted in much improved availability of kidney transplants.

3. The theory uses a lot of math. It does not rely on verbal characterizations of human behavior, but on hard quantitative predictions derived from non-trivial mathematics. Without that math, the theory would be useless.

In other words, Matching Theory is what most scientists would call science. Nor, I believe, is it the only such example. Critics of the economics profession should realize this. It's an important fact that not all fields of economics - and not all techniques and theories and schools of thought within each field - are created equal, in terms of their testability, real-world applicability, and appropriate use of mathematics.

As for the Nobel, I see this decision as increasing the credibility of the prize itself. The econ Nobel traditionally lies somewhere in between the Peace Prize - which everyone knows is a big joke - and the Physics, Chemistry, and Medicine Prizes, which have managed to maintain very high levels of credibility. But the Economics Prize has always seemed to alternate between testable, applicable, "science-y" sorts of economics (think James Heckman's selection models, Daniel Kahneman's experiments, William Vickrey's auction theory, or the 2007 prize for mechanism design) and less testable, more "storytelling" kinds of econ (I am sure you know which ones I'm talking about). It is no coincidence that the former tend to be prizes for microeconomics and the latter tend to go to macroeconomists.

My guess - and this is just a wild guess - is that in the years since the Crisis of 2008, the enormous wave of criticism directed at the econ profession has not been lost on the Nobel Prize committee. The only macroeconomists selected for the prize in the past few years have been Chris Sims and Thomas Sargent - two hardcore empiricists whose work serves to illuminate the data limitations and huge error margins faced by macroeconomics. It is my sincere hope that the prize will continue to move in the direction of the science prizes, toward testable, applicable theories and credible empirical results.

And in the meantime, my heartiest congratulations to Lloyd Shapley and Al Roth, who richly deserved the prize.