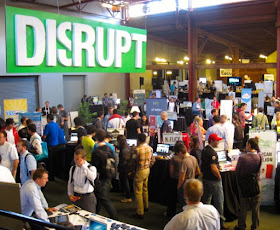 Try this: Think of an animal that isn't an elephant.

What was the first animal you thought of? For a hefty fraction of you, it was probably an elephant. But if I had just said "Think of an animal", only a few of you would have thought of an elephant. The moral of this story is that when you try to fixate on "thinking different," often you just fixate on the same-old, same-old.

This is a colloquial description of a line of research by Steven M. Smith, a cognitive psychologist at Texas A&M University (disclosure: Steven M. Smith is my father). In this book chapter, Smith describes how "initial ideas" can constrain creativity. The results are best summed up by this abstract (omitted from the final draft):

The first ideas to be considered during creative idea generation can have profoundly constraining effects on the scope of the ideas that are subsequently generated. Even if initial ideas are intended to serve as helpful examples, or they are given simply to get the creative process going, the constraints of initial ideas may be inescapable. Such constraints can impede successful problem solving and inhibit creative invention. Overcoming these constraints can be enhanced by reconsidering initially failed problems in new contexts.

Here is another paper by Smith, along with Nick Kohn, detailing how group brainstorming can lead to "collaborative fixation", in which everyone in the group starts fixating on whatever ideas get suggested first.

Why am I bringing this up? Well, in the past few years, I've been reading - and hearing - a lot about the Entrepreneurship Subculture. You all know what this is. It's mostly young people, mostly in urban areas (especially SF and NYC). It's mostly (but not exclusively) made up of entrepreneurs in the fields of technology and media. It includes media outlets like TechCrunch, books like The Lean Startup, "incubators" like YCombinator, forums like Quora, and other outlets like the TED and TEDx talks. I myself have come in contact with this subculture just by dint of being friends with a lot of engineers, and with Peter Chang, whose own venture-funded media startup covers a lot of entrepreneurship-related events out in the Bay Area.

At this point, given the often combative nature of this blog, as well as the title, you might expect me to reveal that I am a detractor of the Entrepreneurship Subculture - a hater, so to speak. But that is not the case. I love the Entrepreneurship Subculture. The sheer intellectual energy of the movement is intoxicating. The people are, by and large, wonderful human beings. And the work being done by those involved in the Subculture is some of the most valuable stuff being done anywhere. In an age when much of highly-educated white-collar America spends its time performing unnecessary medical tests, trying to trick suckers into buying overvalued financial assets, or lobbying government for pork, the crowd at your local TechCrunch Disrupt conference are the real heroes of the economy.

But - as you may expect - I wonder if the Entrepreneurship Subculture isn't creating some unwarranted adverse effects. By putting entrepreneurs in such close and constant contact with each other, does the Subculture ferment creativity and cross-collaboration? Probably. But it also may inadvertently stifle creativity, by exactly the process that Steven Smith's research describes. Working in incubators, attending entrepreneur conferences, reading entrepreneurship publications, and talking constantly to other entrepreneurs may cause "collaborative fixation". Everyone will end up thinking of the same stuff, even if they try to think of something new and differentiated. Especially if they try.

If that happens, what we'll see is a lot of "me too" products. A social network for miniature terriers. Yet another mobile social local photo sharing app (that line is plagiarized from somewhere, but I can't remember where). Not the kind of big conceptual breakthroughs that really disrupt the industrial structure. Not the kind of big ideas that build really huge and successful companies.

This is important because America needs good entrepreneurship - and especially good tech entrepreneurship - more than ever. Rates of new business formation are falling. The venture capital sector is not making good returns (though much of their profit may have simply been taken by angel investors). And then there is that Great Stagnation.

So what is the solution? How can we make sure that a Subculture designed to ferment entrepreneurship doesn't end up accidentally encouraging groupthink? Smith's research suggests a way out: a change of context. Give entrepreneurs a break. Send them out into the wilderness - to other countries, or to small towns away from the beating heart of innovation. Or just encourage them to spend periods of time away from the Subculture, avoiding conferences, not talking to other entrepreneurs, not reading TechCruch. Have them live life, read some science fiction, visit factories and farms and retail outlets and non-tech office parks. Have them talk to friends (or just make friends) who work in other areas of the economy. Get them out of the bubble. Have them write down ideas, keep diaries, etc. I strongly suspect that when they come back, many of them will have new, weird, different ideas that they would not otherwise have had.

A famous Japanese artist once told me "It's impossible to think of anything new in a city." I countered "Yes, but it's hard to collaborate out in the country." We agreed that one needs to alternate. In the same way, I think that the Entrepreneurship Subculture should emphasize the importance of changes in context. Disrupt your own ideas.
Noah Smith Posted at 5:31 PM
Share