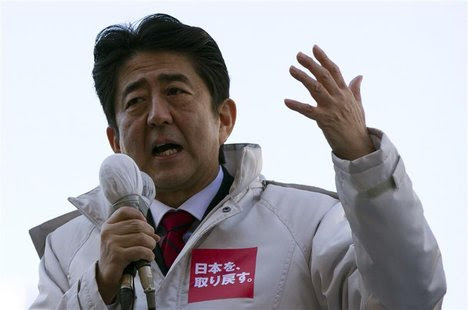 Monetarists are an innocent lot. American bloggers, op-ed writers, and economists seem quite taken in by Japanese Prime Minister Shinzo Abe's promise of a grand monetary experiment. Abe is threatening to revoke the Bank of Japan's independence, forcing those recalcitrant hard-money-loving inflation hawks to set a hard target of 2% inflation or higher. To an American monetarist, this is really Christmas. Finally, we get to actually test the hypothesis that a central bank can hit an inflation target if it really puts its mind to it! Finally, we get to see the ultimate two-men-enter, one-man-leaves doomsday showdown between the immovable object of Japan's implacable deflation and the irresistible force of Print Money And Buy Stuff!

But it is not to be. Shinzo Abe is not the Jesus of monetary policy. American monetarists, I feel for you - I would love to see the idea of monetary policy dominance put to a stark test - but I just don't think it's going to happen.

You see, unlike most Americans who weren't watching back in 2006-2007, I remember Shinzo Abe's first term as PM. So I know what a walking facepalm this man represents. A brief refresher course: Abe's agricultural minister killed himself after a corruption scandal, and another of his cabinet ministers resigned after another such scandal. His health minister, Hakuo Yanagisawa, managed to hang on despite a wave of negative publicity after he called women "baby-making machines".

Abe is mainly interested in social and cultural issues. He is the Japanese style of socio-cultural conservative, sort of a Newt Gingrich type . As prime minister in 2006-7, he enacted a law requiring public schools to teach "patriotism",  mounted a vigorous denial of Japan's WW2 "comfort women" sex-slavery, gave gifts to the nationalist Yasukuni Shrine (angering China), and pushed to de-emphasize Japan's WW2 war guilt in school textbooks. His lifelong quest has been the revision of Japan's "pacifist" constitution to allow Japan to have a normal military.

I of course don't mean to imply that Abe's cultural conservatism makes him unlikely to experiment with monetary policy (unlike in America, in Japan "hard money" is less of a conservative sacred cow). Instead, what I mean is that Abe really just does not care very much at all about the economy. I mean, of course he wants Japan to be strong, and of course he doesn't want his party kicked out of power. But his overwhelming priority is erasing the legacy of World War 2, with the economy a distant, distant second.

This is why Abe allows himself to be surrounded by corrupt and incompetent people. He is entirely focused on his cultural conservative quest. The other day Abe called Obama "Bush". He just deeply, truly, does not care about stuff that does not involve boosting Japanese nationalism.

So why is Abe making all this noise about revoking central bank independence, setting hard inflation targets, etc.? I have a hypothesis: He is talking down the yen.

Since Abe was elected in a landslide a couple weeks ago, the yen, which had been at historically high levels, has plunged. (Update: from Matthew Boesler at Business Insider, here is a chart of the yen-dollar exchange rate since the LDP returned to power: 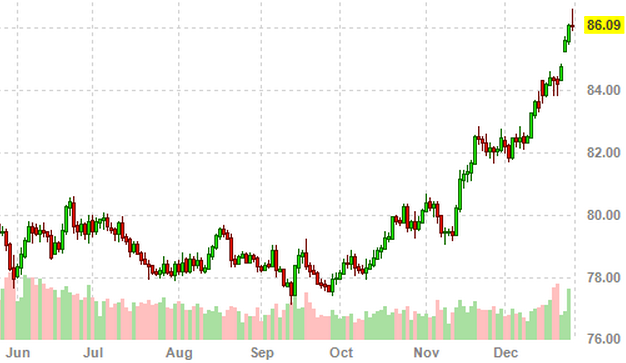 This is bound to give a (possibly temporary) boost to Japan's beleaguered exporters, who have been suffering quite dramatically under the strong yen. Remember, Abe's LDP, which ruled Japan for 55 years, has always been closely connected with export manufacturers in the so-called "iron triangle". The LDP, which thrived in the 60s, 70s, and 80s, has always been a mercantilist outfit, weakening the currency to pump up exports, using the surplus from exports to support Japan's corporatist social model in the so-called "two-tiered economy". In Japan's days as a high-quality low-cost export powerhouse, this worked marvelously and kept everyone happy, allowing the LDP to keep power for generations. The recent strength of the yen, however, has been looking like the final nail in that system's coffin.

By making lots of noise about revoking the BOJ's independence, Abe is trying to convince foreigners that inflation is on the way, thus sending the yen south. Basically, he is taking a page out of the LDP's old playbook - weaken the currency, pump up exports. Sure, it's not a sustainable strategy, but Abe doesn't need it to be sustainable; he just needs it to give the economy a fillip for long enough to let him complete his precious revision of the Japanese constitution. After that, he couldn't care less about what happens to the economy. It's a cursory, stopgap measure. To Abe, Japan's pride as a nation is infinitely more important than the fatness of its people's wallets.

Abe is not exactly trying to keep this strategy a secret, saying that counteracting the strong yen is a top priority.

So what does this mean for monetary policy? It means that Abe is targeting exchange rates, not inflation (or NGDP). He'll do what he has to do to tweak foreign expectations enough to keep the yen weak, but he won't actually follow through and revoke BOJ independence. And even if by some miracle he does revoke BOJ independence, he won't insist on a hard inflation target. A non-independent BOJ wouldn't be controlled by Shinzo Abe, it would be controlled by the Ministry of Finance, and those people are just as likely to fear the peril of hyperinflation.

Expect Abe to continue making noise at the BOJ, and expect to see some token BOJ response, i.e. a bit more quantitative easing. If the yen starts rising again, expect Abe to switch gears and start talking about (or actually carrying out) currency market intervention of the type carried out in 2004. Essentially, he will continue the current talk of radical monetary policy experimentation precisely as long as he thinks it's holding down the yen, and then abandon it for a different mercantilist stopgap. Do not expect any real action against the BOJ.

OK, maybe I'm wrong. I'm no expert in Japanese politics, just a guy who has been reading about the LDP for a long time. If Abe follows through on his radical monetary proposals, I'll gladly eat crow. But think of it this way. If a British guy came up to you six months ago, brimming with optimism that Vice President Paul Ryan would enact his famous Ryan Plan and save the U.S. from ballooning budget deficits, what would have been your response? That's how I feel when I see people put their trust in Shinzo Abe.

I hope I'm wrong. I'd love to see a bold monetary experiment. But I'm pretty sure I know these LDP jokers, and I'm pretty sure they're not going to deliver in the crunch.


Update: And now today, via the WSJ, I see that I'm completely right about the LDP's economic philosophy. Observe:


Japan's new finance minister upped the ante in the country's war of words against the strong yen, lashing out at the U.S. and Europe for letting their currencies weaken dramatically and calling on the U.S. to strengthen the dollar.

"The U.S. ought to do its job and make the dollar strong. And what about the euro?" Mr. Aso said Friday...

A procession of Japanese executives and politicians have bemoaned the yen's strength, blaming it for a loss of competitiveness, dwindling earnings, bankruptcies and the relocation of operations abroad...

The dollar has recently staged a sharp recovery, as Mr. Abe's pledge to strong-arm the Bank of Japan into easing monetary policy to weaken the yen has driven investors to sell off the yen. (emphasis mine)

Oh yeah, they're really thinking a lot about inflation rates and money demand and the Zero Lower Bound. Sure.