On the iatrogenic explanation of post-recession stagnations

I think that title really reaches out of the screen and grabs the reader, don't you? :-)

Anyway. John Cochrane has been diligently working through New Keynesian macro models, and in this post he evaluates their ability to explain the long post-recession stagnation we've been experiencing, as well as their policy prescriptions. Some excerpts:

Hence, "open mouth operations," "forward guidance," and "managing expectations."  If the Fed by just talking can persuade people it will hold interest rates low for a longer periods, when they are expecting rates to rise above zero, that expectation will "stimulate" today's consumption. If promises don't help, perhaps announcing a new "rule" which if followed would lead to lower rates for longer will help to change expectations.

In this equation, more inflation lowers the real interest rate too. So, anything that boosts inflation is a good thing. Boosting inflation isn't primarily about a Phillips curve, direct "monetary stimulus," encouraging investment, and so on. It's a way to lower real interest rates inside the integral and shift consumption from the future to the present.

Once again, increasing expected future inflation would be just as effective as increasing current inflation. Hence, calls for the Fed to announce a higher inflation target, or at least announce that it will tolerate more inflation before beginning to raise rates, as it has.

He points out what he sees as some of the limitations of this story:


New Keynesian models are a bit fuzzy on just why...the "natural rate" is sharply negative...Many of the formal models assume that consumer's discount rate (rho) has declined sharply, beyond the capacity of the interest rate to follow it...

Now, a spontaneous outbreak of thrift, to the point of valuing the future a lot more than the present, seems a bit of a strained diagnosis for the fundamental trouble of the US economy...

To be fair, all the papers I've read say clearly that they regard the decline in the discount rate rho as a stand-in for some more complex process involving the financial crisis...

The question before us is not really why consumption fell so drastically in 2008 and 2009. The question is, why did consumption get stuck at so low a level starting in 2010?...

This question and controversy is much like those surrounding the Great Depression...[W]hy did the US get stuck so low for so long? Was it bad monetary policy (Friedman and Schwartz), bad microeconomic policy, war on capital, and high marginal tax rates (Cole, Ohanian, Prescott, etc.), or inadequate fiscal stimulus (Keynesians)?...

I guess you could argue for a constant sequence of unexpected negative shocks, so that each quarter, people are expecting the big consumption growth which just ends up not happening. But you can see how strained that argument is. It would be much more appealing to refer to a model and analysis that describes slumponomics directly.

I think Cochrane is being a little too dismissive of the "string of negative shocks" idea. My suspicion is that a global financial crises can circle the world like a tsunami, rippling out from America and triggering crises in Europe, Japan, and China that then impact the U.S. a few years later.

But I agree that New Keynesian models are very stylized and opaque. It's easy to solve them, but not at all easy to tell what real-world economic forces correspond to the thing you're solving. New Keynesian models basically sacrifice realism for tractability, a sacrifice imposed on them - it seems to me - by the need to follow the kludgey DSGE modeling format. For example, we know that prices don't get set by Calvo pricing, and yet many New Keynesian models have this feature.

Anyway, Cochrane prefers a different explanation for the long post-crisis stagnation: an iatrogenic one. "Iatrogenic" is a medical term for when an attempt at treating a person causes even greater harm (such as when a routine operation paralyzes a patient). Cochrane supports the idea that government policies that arose in response to what would otherwise have been a short, sharp crash in 2009 ended up making things far worse by causing a long drawn-out stagnation. However, he admits some problems with this view as well:


Like the new-Keynesians,  I won't be that specific here about just why consumption fell so drastically in the financial crisis...From [my] perspective, consumers realized in fall 2008, that this recession was going to last forever rather than bounce back quickly, and they adjusted consumption downward accordingly. They were right. Just how they knew, when all the Government's forecasters thought we would quickly bounce back, is an interesting question.  Surely, my litany of free-marketer's complaints did not obvioulsy get suddenly worse in October 2008, just coincident with a run in the shadow banking system.  Well, maybe not so surely. Maybe consumers thought, we're in a horrible banking crisis, and our government is likely to prolong this one with ham-handed policies just like they did in the 1930s. But that's pretty speculative. And I do think (just as speculatively) there was a run in the shadow banking system, effective risk aversion spiked, and the financial crisis was more than just a signal of bad policy to come.

But all that is a topic for another day...

Actually, I think there are two other big problems with the "iatrogenic" explanation of our stagnation.

First, and most importantly, there's the international aspect of the economy. Here's Cochrane's picture of how American consumption has "downshifted" since 2008: 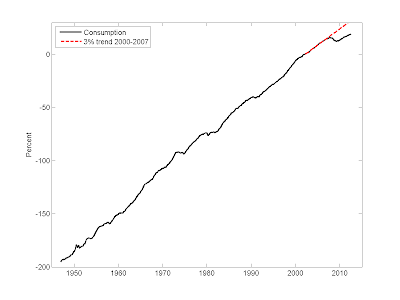 A graph of GDP will look the same. But look at any rich country, and chances are that it experienced the same kind of "permanent downshift" in its consumption after 2008! European countries. Japan. Or look at the graphs for other countries that experienced financial crises - Japan and Sweden after 1990. Korea after 1997. And so on. They all look pretty much the same - a long trend, followed by an abrupt fall, followed by a resumption of growth at the previous trend but at a lower level. Here are two from Sweden and Korea:

My second problem with the "iatrogenic" model is prices. Although (as Cochrane points out) the lack of deflation since 2009 is a problem for some New Keynesian models, the lack of inflation seems to me to be a problem for the kind of "permanent income" model that Cochrane prefers. In a simple Econ 102-type AD-AS model, if you have a negative shock to long-run supply (permanent income), prices have to rise rapidly at some point. The logic is simple: An impairment in productive capacity should cause shortages. But since the financial crisis, U.S. inflation has been very subdued:

Now, I realize that AD-AS logic is pretty simple. But I also know that it's very tricky and difficult to get macro models to tell you that a permanent supply shock has an impulse response on prices that never pokes its head above zero. You can do it, but it's my understanding that you need to use things like "news shocks" and other such assumptions about the timing of information arrival. It ends up looking pretty weird.

So I think that while there are definitely problems with the New Keynesian interpretation of the world, there are even more problems with the idea that government policy (and far-sighted citizens who guessed government policy years in advance) caused our long post-crisis stagnation. My intuition says the most likely explanation - unfortunately - is that there are some very deep things about how economies work that no macro model yet encompasses.
Author: Noah Smith Posted at 1:02 AM