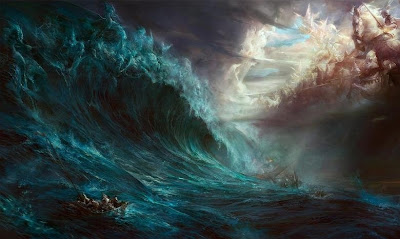 Most of the time, econ bloggers and columnists write as if we were speaking to an audience that has taken a few econ classes. But the more widely read our posts and columns become, the more our real audiences fail to fit this ideal. Most people who read us are smart and educated. But smart and educated non-economists ("normal people", if you will) see econ - and especially macro - in fundamentally different ways from economists.

I've been thinking about these differences for a while, and I've reached two major conclusions:

2. Normal people see macro as being mostly about redistribution rather than about efficiency.

The first of these tendencies can be seen in this video. The video features Mike Sacks of the Huffington Post interviewing Miles Kimball and three economics writers. The interview itself is very interesting and informative (Umair Haque's ramblings notwithstanding). Miles especially does an excellent job of putting macro ideas in simple terms. Mark Gongloff is also solid.

But scroll forward to the 10 minute mark. Mike Sacks, certainly an educated and intelligent guy, admits how little he understands macroeconomics. This amuses him so much that he starts laughing at himself. Groping for the rudiments of an understanding, he instinctively tries to label economic philosophies as "liberal" and "conservative". At the end of the video, he reads Miles Kimball's bio, and finding Miles to be a political independent, moderate, and maverick, declares that Kimball is his favorite sage among those present (a very good choice, I must say, for more reasons than just the one Sacks gives).

Americans in particular have come to understand almost everything through the lens of the left-right divide in American politics. Science has obviously not been exempt from this trend, as the fights over evolution, climate science, cosmology, vaccination, and GMO crops have shown (no word yet on whether Newton's Laws of Motion are commie scum or fascist bastards). Economics, with all its public policy implications, never had any chance of escaping the tribalist wave. Even basic economic numbers are subject to partisan disagreement...at least until people are paid to get them right. And then there's the partisan bias in economic forecasts.

As for my second observation - that people understand arguments for redistribution but don't understand efficiency arguments - I have no hard data to back that one up. My observation comes from long experience and countless interactions with friends and relatives and strangers in cafes, blog commenters and op-ed writers and EconoTrolls. Among the things I've noticed are:

1. Normal people talk about economic "schools" much much more than do economists.

2. When normal people talk about the consequences of stabilization policy (monetary and fiscal policy), they often talk about the impact on the rich and poor, the benefits to big banks, and the "fairness" of the policies. In contrast, economists rarely talk about these things.

In a certain sense, the normal people's approach makes more sense than that of the economists. We are an incredibly rich economy - the world's richest large economy by far. This means there are relatively few efficiency gains to be had, but the impact of any redistribution of our titanic wealth will be enormous. Economists usually try to be impartial, shrugging and saying "Rent is rent!" when confronted with questions of distribution, or pooh-poohing welfare analysis as the province of philosphers and dorm-room discussions. They focus on efficiency because a Pareto improvement is something that everyone can get behind (in fact, that's how it's defined). In the process, they ignore the main issue that is usually on the mind of someone thinking about the economy: "What's in it for me?"

So most normal people seem to see macroeconomics as political (even if most economists don't!), and see redistribution as the main question. The result is that public discussions of macro, on the blogs and elsewhere, usually break down into tribal camps, and thinkers are often seen more as tribal champions than as technocratic advisors or sources of intellectually interesting ideas. Many people see the "-isms" of macro - "New Keyneisanism", "New Classicalism", etc. - as political advocacy rather than as dispassionate scientific attempts to explain the world around us.

If monetarists or New Keynesians (is there a difference?) suggest monetary expansion, for example, a lot of readers see it instead as a liberal attempt to use inflation to redistribute money from rich creditors to poor debtors, while a few see it as a conservative attempt to boost the profits of big banks. Only a small minority seem to consider the question of whether monetary expansion is a Pareto efficient response to the business cycle. Because of this, monetarists like Scott Sumner often spend a lot of time "punching hippies" on every issue other than monetary policy, trying to avoid being tarred as hippies themselves for their lack of fear of inflation. (Note to Sumner: This strategem has quite noticeably failed to convince most conservatives to support anything remotely resembling NGDP targeting.)

(Update: Sumner pleads not guilty to hippie-punching. Perhaps the direction of Sumner's punching is determined more by path-dependent stochasticity, and less by game theory, than I had assumed. Sumner then accuses me of strategic Sumner-punching. I also plead not guilty; I would only Sumner-punch for the sake of pure entertainment. I have my principles, after all!)

In other words, econ, like everything else in modern America, seems to have been caught up in the great war of Tribal Realities that has rent apart everything in our society. Even the most powerful and brilliant individual intellectual is like an ant compared to those titanic forces. And until the great War of the Tribes is over, our feeble attempts to show off our scattered, tiny, incomplete insights into Extant Reality will be lost amidst the tossing maelstrom of Tribal Reality. But in addition, it also means that most macroeconomists are ignoring the question most people care about - the question of "Who benefits from stabilization policy?".

Of course, I could be wrong about this. Much of my "data" is just anecdotal, after all. There's a serious selection bias at work, since those stirred by tribal passions will be more likely to leave a shrill comment on a blog, or start an argument at dinner.

What do you think?
Author: Noah Smith Posted at 5:42 AM