What Determines the Return on Gold?

Gold glitters, but from an investment perspective it does little else. It is backed by neither cash flows (like stocks are) nor a value at maturity (like bonds are). It's just a metal that, historically, has always been highly valued: a value that exists beyond its role in jewelry or in industry.

So what gives? Broadly speaking, when people make a bull case for gold, they tend to talk about two catalysts. First, they argue that because central banks are engaging in expansionary monetary policy, this will lead to massive levels of inflation that will drive gold prices higher. Second, they argue that gold is valuable because it acts like a panic button and serves as insurance against crisis. These in fact, were the primary motivators behind Paulson's famous bet on gold. In this post, I hope to show that the theory underlying (1) is flat out wrong, and that the logic behind (2) does not correspond to the actual challenging facing the world right now.

So let's first talk about inflation. The argument goes that since gold is a precious metal with "intrinsic" value, its price will rapidly appreciate in an environment of rapid inflation. Unlike a fiat currency, gold cannot be "debased" and therefore even if the Fed prints too many dollars, the gold coins will still hold onto their real value. In a world in which wheelbarrows of paper money buy only loaves of bread, gold will still make sure you can still eat. This value across all levels of inflation means that gold prices spike if inflation rises, and thus holding gold can hedge that risk.

When people think of high inflation, they naturally gravitate towards the late 70's, early 80's -- a time of rapid growth in gold prices. But this was a special time for many reasons, not least of which was the United States decision to suspend dollar convertibility. But ever since those inflationary years, although gold has had its ups and downs, its price has actually been relatively uncorrelated with levels of inflation. In fact, if you look at the scatter plot below, you'll notice that the positive relationship between gold and inflation is almost entirely driven by three data points: 1974, 1979, and 1980. Once you drop those three years worth of observations, you go from the upward sloping dotted line to the solid downward sloping one. This suggests that inflation is actually a horrible predictor of where gold is going to go, and that we should look elsewhere for a guide. 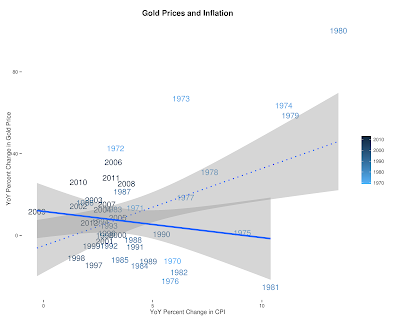 So what is this other guide? Real rates. In fact, yearly return on gold is almost entirely determined by a the 10 year treasury yield minus the year over year inflation rate. To see this, consider the following scatter plot. Unlike the gold-inflation relationship, the real interest relationship is not driven by just a few data points. Both the 1970's and 2011 gold price spikes are explained by this relationship. Moreover, the relationship between the variables seems consistent through all levels of the real interest rate. This is evident from the fact that the non-parametric loess fit (the red line) and the linear fit are roughly consistent with each other. 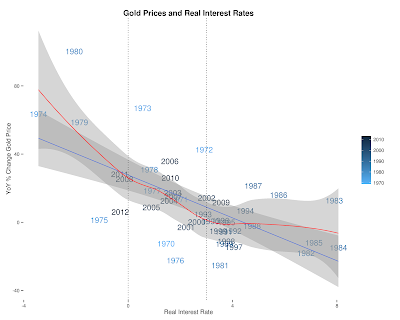 This observation makes the most sense in the context of a Hotelling model -- a note that Paul Krugman has previously made. For a full explanation of the mechanics of the Hotelling model, I suggest you read Krugman's post. But the intuition for the model is that a higher real interest rate lowers demand for gold since the opportunity cost of holding it increases.

The relationship holds with more recent data as well. As seen below, the price of gold has been almost entirely determined by the yield on the 10 year treasury inflation protected security - a measure of future expected real rates. Admittedly, there is something puzzling going on. Whereas the historical relationship seems to run from gold growth rates to the level of the real interest rate, the gold price/TIPS relationship seems to suggest the gold price level is related to the level of the real interest rate. Nevertheless, the moral of the story is the same: higher real rates are bad news bears for goldbugs.

So why do people associate inflation with high gold returns, when in actuality gold returns are driven by real rates? It's because they reason from a price change and ignore the cause of inflation. The inflation seen in the 1970's and 1980's was very unique because it was the result of contracting aggregate supply, which had the effect of both raising inflation while also lowering the attractiveness of investment projects (i.e. lower real rates). However, inflation can also be the result of increasing aggregate demand. In this case, especially if the aggregate demand is pulling the economy out of a slump, the effect on the real interest rate is ambiguous to slightly positive. Therefore the relationship between gold and inflation is less clear cut.

This leads to an interesting conclusion about inflation hedges in general. Because there are two types of inflation -- supply and demand side -- it is important that you're careful with what kind of inflation hedge you're buying. If you're worried that "earthquake risks" will devastate the supply side of the economy, go ahead and buy gold. But if you're worried about a lack of central bank discipline, then you're better off buying the the 10 year inflation protected security while shorting the 10 year treasury.

This is particularly relevant given recent Chinese and Indian economic stress.

If China undergoes a financial crisis, the most likely result will be capital flight. In this process, China will be forced to reduce its savings and investments as it rebalances. But in this case, since China will no longer be able to invest as many funds abroad, real rates rise and the gold price should actually fall.

Moreover, if China undergoes such a crisis its retail demand for gold will fall -- another strike against the insurance quality of gold.

Similarly, India's currency is under attack and its central bank may need to draw on its reserves of foreign currencies to stem the slide. Below I have a skew graph from a few weeks ago showing the depreciation that option markets were pricing in. As can be seen, there's quite a bit of depreciation risk in the tails. The effect of any such depreciation will be quite similar as in the Chinese case. Demand for foreign (i.e. American) assets will fall, thereby pushing U.S. real interest rates higher.

So while gold might have been good insurance it the past, it is not right now. Because the tail risks facing the global economy are much different than in the past, holding gold will end up amplifying risks instead.

The conclusion from all this analysis is that gold does not "march on a different beat." In the parlance of finance, it is not a source of uncorrelated returns. Nor is it a pure result of market psychology. In fact, given gold's relationship with real rates, it can be best described as a leveraged bet that real rates will fall. But with obscene amounts of volatility and low long run returns, it's not clear why anybody would want to hold gold at all.
Author: Yichuan Wang Posted at 3:15 AM