Did nominal interest rates fail to spike during the run on the Franc?

Paul Krugman has a new paper investigating the role of currency regimes on the nature of sudden stops, where he argues that a sudden stop would not be contractionary for a country that has a floating exchange rate. The big chunk of the paper is theoretical, but towards the end of the paper, Krugman digs out an interesting case study – France in the 1920s – that helps put his argument into historical perspective.
“The closest one can come to historical situations at all resembling the situation of today’s floating-rate debtors is that of France in the 1920s, which emerged from World War I with a large debt burden that it had great political difficulty dealing with, and did in fact experience a run on the franc.”
“The basic insight is that France grew quite strongly as the franc slid due to loss of confidence […] What actually happened was a sharp fall in the franc, substantial inflation, but no interest rate spike and a quite good performance in terms of real output. Nothing in that story validates the conventional wisdom [about the vulnerability of the United States and other nations to a loss of capital inflows].”
I happened to be particularly interested in that part of the paper, as I’ve recently been trying to understand why nominal interest rates did not spike following the election of the Popular Front in 1936 and the country’s departure from the Gold Standard a few months after. Krugman seemed to point to a similar situation: despite the Franc losing two thirds of its value between 1922 and 1926, he notes that there was “no spike in interest rates”. 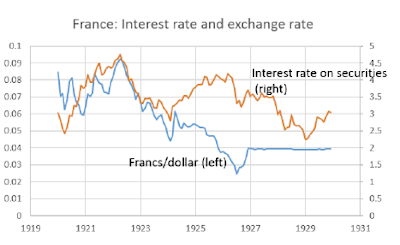 Source: Paul Krugman
In fact, Krugman’s diagram shows that “rates actually fell during the first leg of franc depreciation”, which is even more puzzling. After a bit of research, I figured out that Krugman is using the average yield for a portfolio of 180 securities of varying returns from the NBER macro history database (series 13027). One would have to turn to the original sources to understand exactly how that series was constructed, but it strikes me as a choice that would warrant a bit of discussion.
As I show below, the more standard measure of nominal interest rates for that period – the rates of returns calculated on the French consols or rentes – gives a different picture. According to this series, nominal interest rates did increase over this time period. The spike, although seemingly not huge, is an understatement of the increase in nominal interest rates as these returns “are averages of the rates during these troubled times and of the rates that were expected to prevail afterwards, once stability was reached again” (Hautcoeur and Sicsic (1999)).  Assuming a long-term interest rate of 3.75 per cent, Hautcoeur and Sicsic (1999) show that the 2 percentage point spike in the nominal interest rates of the consols that I document in the diagram below correspond to an increase in medium-term nominal interest rates of about 8 percentage points. 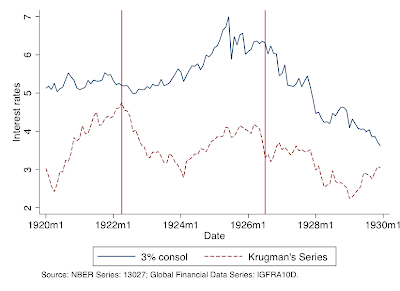 
So nominal interest rates did spike, although clearly not enough to make real interest rates increase. Overall, the Krugman story holds, since he only needs a decrease in real interest rates for the sudden stop to be expansionary. But unless I missed something, that small part of his paper on nominal interest rates needs to be revised.
Jeremie Cohen-Setton (@JCSBruegel) is a PhD candidate in economics at UC Berkeley and an Affiliate Fellow at Bruegel. He specializes in Macroeconomic Policies and Macroeconomic History and worked previously as an economist at HM Treasury and at Goldman Sachs. Jeremie blogs at ecbwatchers.org and is the main author of the blogs review at bruegel.org.
Author: Unknown Posted at 12:29 AM