A History Lesson for Scotland 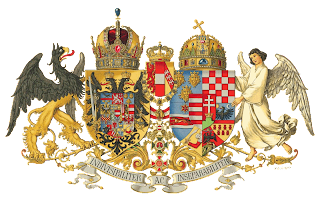 In Guan's recent post on this blog, "Scotland, sterling and the debt," he notes that Scotland will hold a referendum on independence from the United Kingdom in September 2014. The Scottish Government suggests that an independent Scotland should be in a currency union with the UK. Guan writes:


"There are probably some sound arguments for that: it could take years to join the euro, and much of Scotland’s trade is with rest-of-UK, and vice versa.

On the other hand, events of recent years have kind of cooled the enthusiasm for currency unions in Europe. It’s not at all clear that it would be a good idea for Scotland to adopt sterling. The UK Government’s position is, sensibly enough, that a currency union would be unworkable without a fiscal and political union, which is kind of absurd when the goal is Scottish independence."

For historical perspective on a potential Sterling Area, we should look back to the Austria-Hungary monetary union of 1867-1918. The monetary union began following the Habsburgs' defeat by Prussia. In "The Logic of Compromise," Marc Flandreau explains that:


"The Austro-Hungarian monetary union was not the result of a monetary marriage but the by-product of a fiscal divorce. Austria and Hungary became in 1867 two sovereign budgetary entities. In the process, they retained a common bank of issue and thus formed a defacto monetary union that would operate until its post-World War I collapse."

A Sterling Area currency union with an independent Scotland would likewise be a product of divorce, not of marriage. An annex to the Scottish Fiscal Commission Working Group's First Report assessing possible currency options for an independent Scotland notes that there are two ways to retain Sterling: through a formal monetary union or through an informal arrangement ("Sterlingisation.") The Scottish Parliament is in favor of the formal monetary union, in which the Bank of England would make monetary policy decisions in consideration of conditions in both Scotland and the rest of the UK. 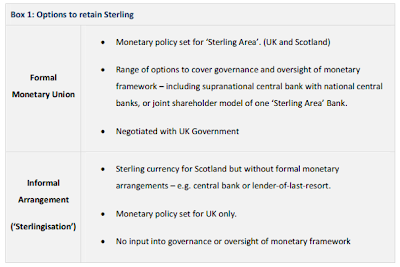 Scotland's proposed formal monetary union would resemble the set-up in the Austria-Hungary monetary union. At the start of the Compromise, the Austrian National Bank was the sole bank of issue for Austria and Hungary. As Flandreau details, Hungary gained increasing control over the central bank over the years. In 1878 the Bank became the Austro-Hungarian Bank. The Austro-Hungarian Bank inherited its predecessor's balance sheet and became a federal institution, with Managements in both Vienna and Budapest. At least two of the twelve Councillors had to be Hungarian. Over the pre-WWI years, there was "a definite trend in Hungary's formal influence within the common Bank. This trend was also reflected in substantive policies of the Bank...The Austro-Hungarian National Bank transformed itself from being a predominantly Austrian institution in 1867 into being a truly binational institution."

Flandreau explains the political economy behind the transformation at the Austro-Hungarian National Bank:


"Consider a monetary union comprising two parts, a 'large' (Austria) and a 'small' (Hungary) country. The common central bank delivers a range of services that are valuable to both parts, but not equally... If power is proportional to size, the small country has very little control over common decisions. It is bound by the discipline of the union without being able to influence decision-making in a way that would address its own specific interests. Co-operation (that is, participation in the union) is sub-optimal and the small country prefers to quit. Sustained co-operation requires that the large country accepts a decision-making process in which the small country receives a greater voting share than size alone would predict...

However, it is not clear why the large country should accept this dilution of power. The normal outcome should therefore be secession...[Casella (1992)] shows that if co-operation delivers a number of public goods that are useful to all parts, then the large country may nonetheless accept a reduction of its relative ability to set decisions, since the additional output may compensate for the initial loss."

Flandreau's logic is relevant for a possible Sterling Area. The Fiscal Commission notes that "Over the medium term it may well be in Scotland’s interests to move to an alternative arrangement, should either the performance of the Scottish economy change or the preferences of the people of Scotland change." A "Sterling Area Bank" would have to be acceptable enough to both parts of the Sterling Area to be maintained. In the Austria-Hungary arrangement, Austria had to provide Hungary with considerable incentives to stay on board. Austria was willing to make the necessary concessions because the benefits to Austria of keeping Hungary in the union were sufficiently great. These benefits may have included dynastic and imperial considerations, maintenance of the crown as an international currency, and maintenance of bilateral trade.

According to Flandreau, then, monetary compromises are determined by bargaining power.  It is not clear to me whether the bargaining power dynamics between Scotland and the rest of the UK would be suitable for sustained cooperation. As commenter Absalon says in response to Guan's post, "Scotland would not need the permission of England to continue to use sterling any more than Panama and Ecuador need American permission to use the dollar. Of course, Panama and Ecuador have no say in setting the policies of the Fed." If an independent Scotland wanted some amount of power in a supranational or joint shareholder central bank, it would need enough bargaining power. Bilateral trade is one consideration. Guan describes another attempt to assert bargaining power:


"The argument of the Scottish National Party-led government is that the British pound and the Bank of England (name notwithstanding) are “assets” of the United Kingdom. Assets and liabilities of the United Kingdom should be split up among the constituent countries, and if rest-of-UK refuses to divide the sterling 'asset', then Scotland would refuse to assume its share of the liabilities—the UK national debt."

In Austria-Hungary, Austria was directly responsible for the pre-1867 common debt. Hungary paid an annuity corresponding to a one-third share. (Unlike in the Eurozone, no "stability pact" was signed.) But it took more than just the desire for Hungary to pay its share of the common debt to hold the currency union together. Times were very different during the Austria-Hungary currency union, so there are limits to the lessons that can be drawn. But the union did manage to exist without a formal fiscal union. In many ways, it was beneficial for Hungary. Scotland would like to enjoy similar benefits, but it may not have the necessary bargaining power that Hungary had.


This is my last post on Not Quite Noahpinion before it reverts to Noahpinion. I really appreciate the opportunity to post here for the past few months and thank you all for reading and commenting. I'll be working on my dissertation and (at least occasionally) posting on my own blog. Keep in touch.
Happy Thanksgiving!
Author: Carola Posted at 11:05 PM