Nassim Taleb is a vulgar bombastic windbag, and I like him a lot. His books do a good job of explaining some deep, important finance ideas for a general audience. He has helped popularize the notion of "skin in the game". His trolling of economists is also good for some lulz (I particularly enjoyed his coinage of the term "macrobullshitters").

However, Taleb has a tendency to indulge in a little macrobullshitting of his own. In February of 2010, he advised everyone in the world to short Treasuries:


As for Treasuries, “It’s a no brainer, every single human should short U.S. Treasury bonds,” said the hedge fund adviser and financial author.

“So long as you see the picture of Larry Summers going to Davos, you have to stay short U.S. Treasuries for another year. It means they (the Obama administration) don’t know what’s going on,” Taleb said.

“Every time you see the picture of what’s his name, (Federal Reserve Chairman Ben) Bernanke, and he still has that job, you have to run to make sure your position is active. So long as these two guys are in office, that’s the trade.”

“You have a very small probability of making money,” he said.

This could be regarded as sound trading advice. If the large probability of small losses is outweighed by the small probability of huge gains, then it makes sense to spend a bit of your money buying deep out-of-the-money puts on Treasuries. The last two lines of Taleb's advice seem to indicate that this is what he's thinking.

But the macroeconomics here is just atrocious (and not just because Taleb feigns not to know Ben Bernanke's name). In 2/2010 Taleb was predicting that the world had underestimated the danger of hyperinflation, and that the world would come to realize that the danger was bigger than it had thought, thus causing Treasury yields to spike and making a huge profit for anyone who shorted them. But history ruled against the inflationistas; even as more and more Quantitative Easing was announced, inflation stayed low and stable.

In other words, people who think that "money-printing" and deficits lead to inflation were forced to rethink their entire worldview. But probably not before they did damage to the world economy, as John Aziz points out.

OK, fine. So Taleb made one bad macro bet. Big deal, right? If you make macro bets, you're going to get some wrong.

But then, on Twitter, when John Aziz called Taleb out on the bad advice, Taleb did his usual eruption-of-anger thing. "Fucking idiot, my prediction did not fail", he stormed. He asserted that he had made money on the Treasury-shorting trade: "[Aziz] is very idiotic; You would want to see my PL from this [trade]", he wrote. And when I retweeted Aziz, Taleb tweeted to me: "I did OK on [the] trades."

Let's see how Taleb really did shorting Treasuries in February 2010. Here is a graph of yields for 2-year and 10-year Treasuries, starting on the day that Taleb told people to short Treasuries, and ending on the day of his Twitter altercation with Aziz (remember that when yields go up, prices go down): 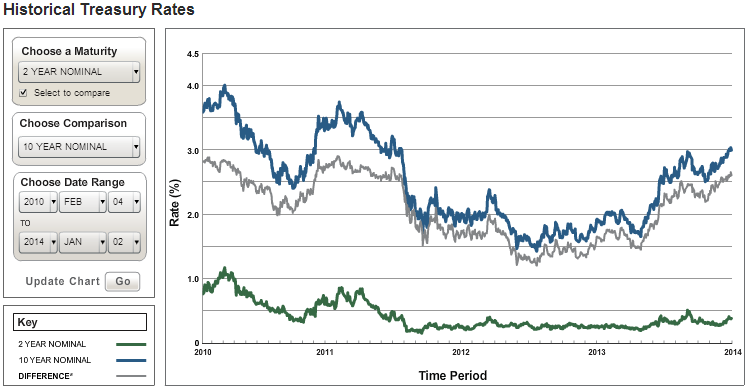 Could Taleb have made money shorting Treasuries on 2/4/2010? Well yes, he could - a little. Treasury prices fell a tiny bit over the 2 months following his prediction. If Taleb exited his short position before the start of May 2010, he would have made money. BUT, recall that Taleb told "every single human" to short Treasuries for one year. If Taleb got out after 2 or 3 months, he didn't take his own advice.

Everyone who did take Taleb's first piece of advice, and held the short position for exactly one year, might have just barely broken even (in other words, they took risk and reaped no reward), depending on which maturity they shorted. Everyone who took Taleb's later advice, and shorted Treasuries every year that Bernanke was in office, definitely lost a large percentage of their money.

Taleb's mistake was not (necessarily) to advise people to short Treasuries - after all, maybe there really was a small chance of a huge run on Treasuries, and that event simply failed to occur. His mistake was twofold. Buying into the inflationista macro-derp was a minor mistake. But the major mistake, as I see it, was to defend his trade after the fact, and to deride those who - like Aziz - caution against making macro bets.

There's a trading culture out there that encourages risk-taking. A lot of this culture is tied up with the culture of masculinity. To be willing to take big risks is to have "balls". Taleb himself has encouraged this idea, writing that "Those with brains but no balls often become mathematicians; those with balls but not brains join the mafia; and those with no brains and no balls become economists." When asked who has "both brains and balls", he replied that it was "traders".

Sadly, this culture of testosterone-fueled risk-taking overconfidence is terrible for the average investor, as Brad Barber and Terry Odean have documented. Balls interfere with brains. They make you you believe you have better information than you have - in other words, they make you ignore risks. That's probably why women, on average, make better traders than men. (And overconfidence is only exacerbated if, out of testosterone-fueled aggression, you angrily defend every single trade you ever made.)

Making big macro bets, on things like a run on Treasuries, is a very ballsy thing to do. You can't really hedge a macro bet (or if you do, then you didn't really make the macro bet). And there is very little likelihood that your macro bet will have alpha - after all, macro data is free and public and everyone is watching it like a hawk all the time. As a successful hedge fund manager once told me, "All financially useful data costs money; that's why macroeconomic data is free." Do you really know anything about macro that the world doesn't know?? Zero Hedge would like to tell you that you do. In 2010, Nassim Taleb told you that you do. Your balls would like to tell you that you do.

That's why when Nassim Taleb or some other guy on TV tells you that shorting Treasuries is a "no-brainer", you shouldn't bet your hard-earned money on his advice. You should keep your skin out of that game, because it's a losing game.
Author: Noah Smith Posted at 5:19 PM