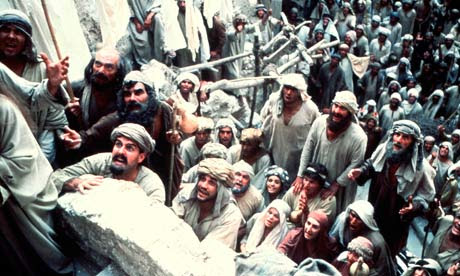 Stop me if you've heard this one before:

1. Inflation is caused by increases in the money supply. If the Fed expands the monetary base ("prints money"), the new money may sit for a while in the bank, but will eventually make its way into the broader economy, at which point it will cause inflation.

2. QE represents money-printing, so it will eventually cause inflation. In fact, it probably already is causing inflation - have you been to the store lately and seen the price of a gallon of milk? And don't you know that they changed the way they measure inflation, meaning it's much higher than the official numbers suggest?

4. Additionally, QE is a stealth bailout of big banks. This will increase their risk-taking via moral hazard and precipitate another financial crisis.

5. QE depresses interest rates, encouraging investors to "reach for yield" by investing in risky assets, increasing the likelihood of another financial crisis.

6. Government borrowing requires the Fed to buy bonds to hold down interest rates and keep the government from defaulting; this will cause/is causing/is defined as inflation.

7. Every bad effect of QE will also result from a long period of zero interest rates.


I have heard this basic story from many employees in the financial industry. I have heard it from a large number of finance writers, including some people I like and respect (but also including some who are shameless hucksters). I have heard it from undergrads at Stony Brook and Michigan. I see it on Twitter and on the blogs and on TV, and I hear it in Wall Street bars. I call it the Finance Macro Canon - the basic framework through which a big chunk of Wall Street sees the macroeconomy.

What I think about each of these belief items is not important (Just for the record, I think #4, 5, 6, and 7 very well might be true, #3 is goofy, #2 is utterly wrong, and #1 is one of the biggest mysteries of macroeconomics). The really interesting question is why the finance industry has become such a hive mind with regards to this worldview.

First of all, part of this canon defies the data - Japan's eternal zero interest rate policy didn't end deflation, nor did a dramatic expansion of its monetary base in the 2000s. And America's "money-printing" and ZIRP haven't done much to budge inflation. Second of all, the canon goes against the bets of the finance industry itself - inflation expectations, as measured by TIPS breakevens, are around 2%, even in the long term.

This, I think, is why the Shadowstats BS - or its cousin, the "have you seen the price of a gallon of milk lately" BS - is so crucial to the Finance Macro Canon (FMC). Humans have cognitive dissonance - it's difficult for us to take actions that don't jive with our beliefs. So subscribers to the FMC have to tell themselves that CPI isn't actually real inflation - that's the only way to reconcile their bet on low CPI with their belief in the theory that QE and ZIRP cause inflation.

But why patch up the FMC with obvious BS like Shadowstats? Why not just alter it to include the possibility that QE and ZIRP don't always cause inflation, even in the long term? In other words, why is the Finance Macro Canon such a canon in the first place?

Here are a few candidate hypotheses, arranged from (in my opinion) the most rational to the least:

1. History. Throughout history, currency debasements have often resulted in inflation. In the 70s, easy monetary policy (money printing) did indeed seem to result in high inflation in the U.S. And when Volcker tightened policy, inflation fell. Why should this time be different?

2. The lingering influence of Milton Friedman and the monetarists. Friedman told us that easy monetary policy causes inflation. His insights form the core of the New Keynesian research program that has come to more-or-less dominate central bank thinking.

3. The lingering influence of the Austrians. Austrians traditionally are suspicious of big banks, and suspicious of government meddling in the economy. Peter Schiff calls himself an Austrian, and he's out there spouting this canon daily, and lots of people listen to him.

4. Motivated reasoning. Most of the retail clients of the finance industry - and the customers of financial media - are older high net worth individuals who stand to benefit both from higher interest rates and from lower inflation. It might be in the interests of financial industry employees and financial media people to express a worldview where the policy conclusion is exactly what their clients and customers would like, while simultaneously placing bets against this worldview.

5. Need for the Illusion of Knowledge. A world in which printing money doesn't have any clear link to inflation is a weird world indeed. Instead of casting themselves adrift on the sea of existential uncertainty, finance industry and media people might subconsciously choose to cling to the shores of certitude.


So how does one extract an individual human mind from this hive mind? That is always a tricky undertaking. But I've found two things that seem to have an effect:

Method 1: Introduce them to MMT. MMT is a great halfway house for recovering Austrians.

Method 2: Introduce them to the research of Steve Williamson. Williamson is an example of a guy who changed his mind about the most likely effect of QE, after observing its real effects.

So far, these are the only things I've found that work. If you have any other ideas, please share. Every mind we reclaim from the hive is another blow struck for rationalism, individuality, and optimal monetary policy (whatever that is).
Author: Noah Smith Posted at 4:13 AM