A bunch of social-conservative types on Twitter keep telling me that women's labor force participation doesn't matter for GDP growth. As evidence they keep linking me to this post by Scott Alexander. Here's Scott's case:


[W]hy did the entry of women into the workforce produce so little effect on GDP? Here’s the graph of US women’s workforce participation: 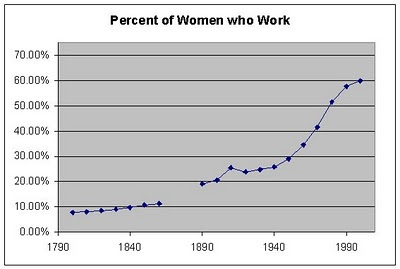 And here’s the graph of US GDP.

I’ve already admitted I find the fixedness of the GDP trend bizarre. But how on Earth do you unexpectedly raise the number of people in the workforce by 50% and still stick to exactly the same GDP trend?

The idea here is that the GDP growth trend looks so smooth that it has to be a law of nature. But that's certainly not the case for other countries. For example, here's a graph for Japan, on a log-log scale:

If Japan's growth rate were constant, that line would be straight. Instead, it's concave, meaning that growth slowed substantially over time. So we know that countries' economic growth rates are not fixed laws of nature - they can be affected by events.

So what were some of the events that affected U.S. GDP growth over the last century? Here's total labor force participation in the U.S. from 1948 to 2014: 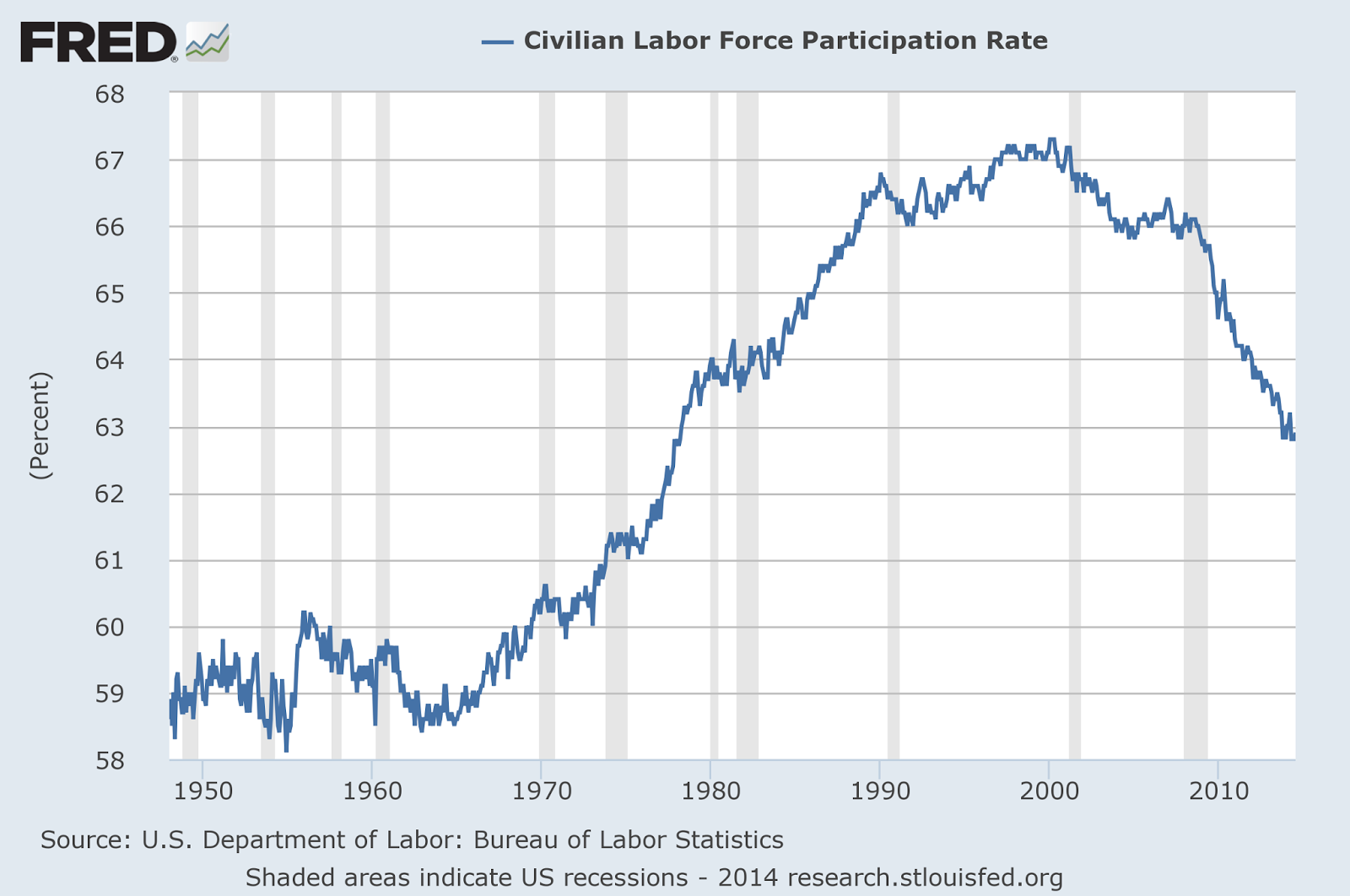 As you can see, there was a big increase between around 1968 and around 1989. A lot of that was women entering the workforce (and men not leaving).

Now what else affects GDP? Population, but U.S. population growth was pretty constant. How about productivity? David Beckworth has a good graph: 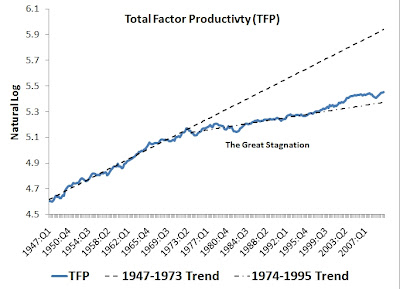 We see that from the late 1960s through the mid-1900s, productivity stagnated noticeably. So the gains from increased labor force participation was one of the things that counteracted the productivity slowdown at that time.

In other words, when Scott asks:


Are we imagining here that if women hadn’t entered the workforce, GDP would have suddenly deviated downward from the trend, and totally by coincidence women rushed in to save the day?

The answer is: Yes!

(Now, one might wonder if TFP and LFPR are related. When more people work, does productivity go down? Interesting question. Economists usually assume the two are unrelated. And there are definitely lots of episodes in which the two move in the same direction instead of canceling out - Japan in the 1990s is one of these, since female labor force participation and TFP both abruptly flattened out in that decade. But some people have argued that higher employment slows down TFP in some situations. Suffice it to say that this is a minority viewpoint, but can't be ruled out.)

Actually, there have been a number of economists who have looked at a bunch of factors and tried to isolate the effect of female labor force participation on growth. Here is a summary of much of the relevant research. The conclusion is that yes, female labor force participation does contribute substantially to per capita GDP. The puzzle Scott presents us with is actually no puzzle.


And then when we ran out of interested women to add to the work force, again by coincidence the GDP stabilized back to its trend line?

The answer is: No. Growth has been slower since women stopped joining the labor force. The trend is your friend til the bend at the end! Scott's GDP graph is zoomed-out, so it's hard to see the "bend at the end", but it's there. There was an acceleration of productivity growth in the late 90s and early 2000s, which - again - partially canceled out the end of women's entry into the labor force. But since then, growth has been slower; there has been no return to the growth rates of the 1960s or even the 1990s.

Now, a couple of caveats. Caveat 1 is that "home production" is not counted in GDP, but matters for living standards. Caveat 2 is that women's labor force participation can affect fertility (by decreasing it or by increasing it), which may affect long-run TFP growth, and will certainly affect total GDP by changing the population size.

But the idea that women's entry into the labor force has been unimportant for GDP is not correct. My advice to social conservatives looking to give economic justifications for traditional gender roles: Stop linking to this post.
Author: Noah Smith Posted at 2:27 PM