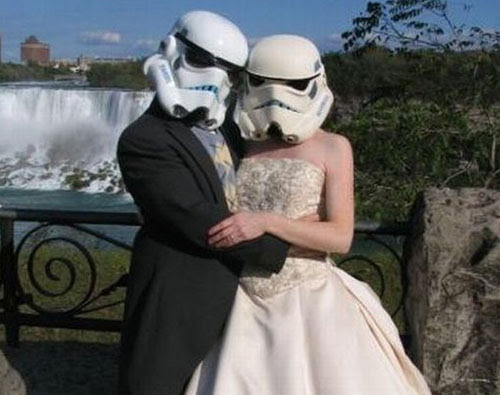 Over the last few years, an unsettling thought has been worming its way into the consciousness of cultural conservatives: What if liberal values are the key to saving marriage?

In the 1980s, this would have been a preposterous question. Everyone knew that liberalism stood for sexual license, single motherhood, and disregard for traditional institutions. To ask if liberalism was the salvation of marriage was like asking if smoking cured cancer. But slowly, people started to realize that working-class people, who are most likely to profess traditional values, are increasingly the least likely to actually live them. Meanwhile, the educated upper middle class, after experimenting with divorce and single parenthood in the 70s and 80s, went back to traditional marriage, while continuing to espouse a belief in gender equality and other liberal ideals.

A scary idea began to dawn on conservatives: What if they had marriage entirely backward?

In a column entitled "The Imitation of Marriage," Ross Douthat nicely sums up this uncomfortable hypothesis:


Many optimistic liberals believe...that what needs to be imitated most are the most socially progressive elements of the new upper class’s way of life: delayed marriage preceded by romantic experimentation, more-interchangeable roles for men and women in breadwinning and child rearing, a more emotionally open and egalitarian approach to marriage and parenting.

The core idea here is that working-class men, in particular, need to let go of a particular image of masculinity — the silent, disciplined provider, the churchgoing paterfamilias — that no longer suits the times. Instead, they need to become more comfortable as part-time homemakers, as emotionally available soul mates, and they need to raise their children to be more adaptive and expressive, to prepare them for a knowledge-based, constantly-in-flux economy.

Like most powerful ideas, this argument is founded on real truths. For Americans of every social class, the future of marriage will be more egalitarian, with more shared burdens and blurrier divisions of labor, or it will not be at all. And the broad patterns of upper-class family life do prepare children for knowledge-based work in ways that working-class family life does not. (emphasis mine)

Douthat clearly understands the Liberal Marriage Hypothesis, and he appears to be warming to the idea. As a proponent of the hypothesis, I see this as a very good sign!

But the ship of ideology does not turn on a dime. Like a socialist reluctant to realize that revolution is bad for the workers, Douthat continues to struggle against full acceptance of the LMH:


But the idea that progressive attitudes can save working-class marriages also has some real problems...it underestimates the effective social conservatism of the upper-class model of family life...Notwithstanding their more egalitarian attitudes, for instance, college-educated households still tend to have male primary breadwinners: As the University of Virginia’s Brad Wilcox points out, college-educated husbands and fathers earn about 70 percent of their family’s income on average, about the same percentage as working-class married couples.

The difference, of course, is that under conservative gender roles, the 30% that women earn is an unpleasant necessity. Traditional masculinity tells husbands to be ashamed of that 30% - "What, you can only put 70% of the bread on the table?" I suspect that shame can break apart a marriage, driving a man to leave his wife in order to find his missing masculinity in other activities.


Meanwhile, as cohabitation and churchgoing trends suggest, many working-class Americans — men very much included — have gone further in embracing progressive models of identity and behavior than many realize, and reaped relatively little reward for that embrace...

[T]he Johns Hopkins sociologist Andrew Cherlin cites research suggesting that many working-class men, far from being trapped in an antique paradigm of “restricted emotional language,” have actually thrown themselves into therapeutic, “spiritual but not religious” questing, substituting Oprah-esque self-help for more traditional forms of self-conceiving and belonging.

As evidence goes, this is fairly weak. The quantitative evidence presented by Charles Murray in Coming Apart - that working-class people are more likely to espouse traditional values and less likely to live them - is not in imminent danger of being turned on its head by these anecdotes.

Finally, Douthat suggests his alternative to the Liberal Marriage Hypothesis:


We may have a culture in which the working class is encouraged to imitate what are sold as key upper-class values — sexual permissiveness and self-fashioning, spirituality and emotivism — when really the upper class is also held together by a kind of secret traditionalism, without whose binding power family life ends up coming apart even faster.

This would be very convenient for a traditionalist who didn't want to have to change his view of reality very much! But how is this supposed to work? Who is "selling" these values to the working class? And why are the working class falling for the trick, instead of seeing the "secret traditionalism" of the upper class, or figuring it out for themselves (as the upper class presumably did)?

It sort of sounds like a version of what many traditionalist conservatives say when I bring up the LMH. In one form or another, they tell me that liberalism only works for smart people. Not-so-smart people, they tell me, need simple rules and guidelines, and guiding institutions like churches, in order to live safe, clean, successful, moral, industrious lives. You can't just give them total social freedom and license and let them figure it all out for themselves, the traditionalists tell me.

Well, maybe that's true. Or maybe - and here I am being an incorrigible optimist - it just takes the working class a little more time. Maybe the upper class are the first to encounter new social forces, the first to hop on new social trends, and therefore the first to figure out how to adapt those trends to their needs. Maybe the working class is doing now what the educated class did in the 1970s and 1980s - responding to the advent of the service economy by adopting more equal gender roles. Maybe more-equal gender roles always have the initial effect of disrupting marriage. But maybe working-class people will eventually do the same thing educated people did - realize that, gender roles or no, marriage is a better bet than the alternative.

In other words, maybe what conservatives should be doing is not fighting the transition tooth and nail, but helping speed it through its inevitable Act 2, to its ultimate denouement - the reestablishment of marriage in a new, stronger form.

Fortunately, it looks like we've at least begun the process of convincing Ross Douthat.
Author: Noah Smith Posted at 8:30 PM