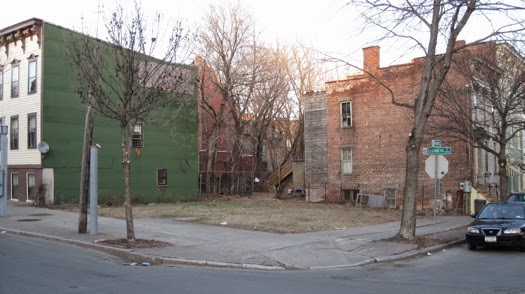 The idea of a Land Value Tax (LVT) is to tax the value of land independently of the value of improvements on that land (e.g. buildings, farms, or mines). Separating the value of a plot of land from the value of the structure built on top of it is a very difficult thing to do, since you can't usually observe the value of a piece of land both before and after the improvement is made. This implementation issue is the main problem with the LVT.

Periodically, people make criticisms of the LVT, and they usually boil down to this measurement problem. For example, Zac Gochenour and Bryan Caplan go to great lengths to show that a tax on the value of unimproved land reduces the incentive to search for better improvements. But under a true LVT, improvements would receive a tax credit, which would remove this problem entirely - if, of course, you can measure the value of the improvement. (Actually, in the case Gochenour and Caplan describe, the measurement of the value of the improvement would actually be easier than usual, since you could do a before/after observation.)

Adam Ozimek of Forbes has another argument against the LVT, which he claims doesn't boil down to the measurement problem. But I think his argument is mistaken. Adam writes:

[T]here are a significant amount of spillovers in local real estate investment. Land value is not just capitalized value of publicly provided public goods, but of nearby privately provided positive spillovers. It’s widely recognized that when individuals clean up a property, or open a popular business, there are often spillover values in the neighborhood. Urban economists recognize that the collective value of these spillovers is huge, and in fact makes up a significant amount of land value.

The fact that private amenities have positive spillovers suggests that they will be underprovided by competitive markets. However, by allowing some of the value of spillovers to be captured, higher land values provide real estate developers, businesses, and even households with incentives to create them.

The value of unimproved land does increase with improvements on neighboring land. But this does not mean that land value allows a landlord to capture the value of the spillovers created by his own investment. It does not.

Suppose there are two adjacent plots of initially undeveloped land, A and B. A is owned by Andy and B by Barbara. Andy pays for a nice house on plot A. This raises the value of plot B, and enriches Barbara. If no Coasean side payments are made, then Andy fails to capture the value of his investment in the nice house. Barbara gets a windfall from Andy's investment.

So I think Adam's critique is just mistaken.

Real estate developers who move into neighborhoods with high vacancies, low demand, and high crime are often hoping that positive spillovers from their investment will spur additional investments from others, which will in turn make their investment more valuable.

This is easy to fit into the example above. Suppose the value of a house on plot B is 1.5 times as high if there is also a house on plot A. That's realistic, since a plot of undeveloped land may make a neighborhood less attractive. In this case, isn't Andy overtaxed by the LVT?

No. His incentive to build the house is exactly the same as it would be without the LVT, since without the LVT he would also fail to capture the spillover benefit on Barbara's improvements. There is an uncompensated positive externality, but it's no bigger with the LVT than without it.

In other words, the problem of neighborhood externalities is a thorny one, but the LVT does not make it worse (or better). The big problem with the LVT remains the measurement problem. Of course, that problem cannot be waved away.

Just to formalize the above intuition a little more, here's the Andy-Barbara example as a 2-person game. Define: 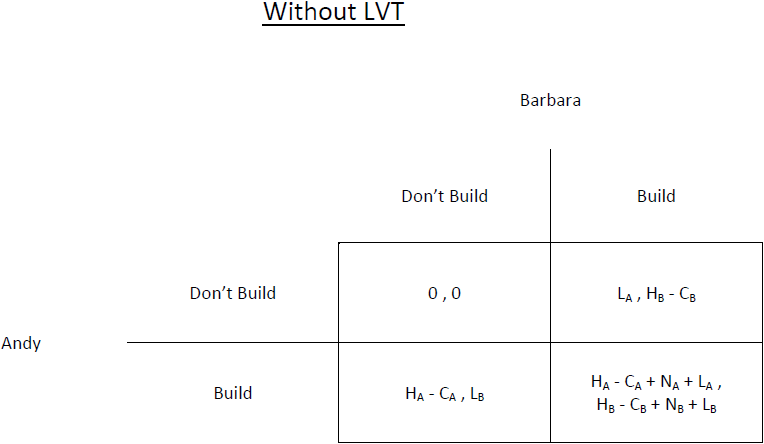 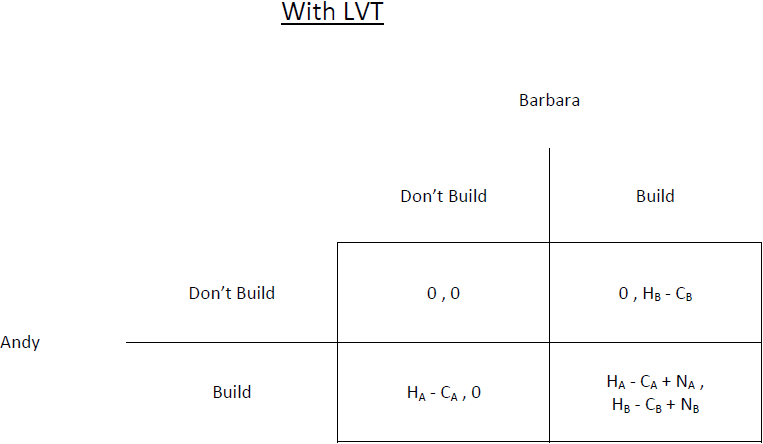 You can easily see that the condition for (Don't Build, Don't Build) to be a Nash equilibrium in the first game is the same as in the second game - namely, that H-C < 0 for both players.

You can also see that the condition for (Build, Build) to be a Nash equilibrium in the first game is the same as in the second game - namely, that H-C+N > 0 for both players.

Therefore, the presence of an LVT won't affect the outcome of which houses get built. This outcome also doesn't change if you make the game sequential.

On a related note, people on Twitter read this post and started bugging me to cite empirical work, which I had previously failed to locate. But I looked again, and this time I found a couple things. For instance, there was a 1997 study in National Tax Journal that examined Pittsburgh's experiment with an LVT in 1979-1980. The study found that the LVT increased building activity. A 2010 study in the Journal of Urban Economics found similar results when examining a number of LVTs implemented in cities in Pennsylvania; not only did LVTs increase the supply of housing, they also increased density.
Author: Noah Smith Posted at 7:39 PM