How China got rich 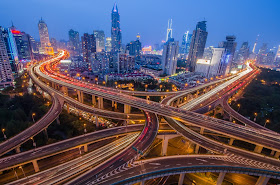 I do not understand this Tyler Cowen post about Chinese catch-up growth:


It seems obvious to many people that Chinese growth is Solow-like catch-up growth, as the country was applying already-introduced technologies to its development.

But how many other economies have grown at about ten percent for so long?  Was there not a secret ingredient added to the mix?

Increasing returns to scale?...Something about Communist Party governance which enabled the corruption to be channeled productively into building more infrastructure rather than holding up progress?  Tiger Mom parenting combined with a relatively meritocratic exam system?...

More radically, is there some “natural,” culture-neutral rate at which innovations trickle down from the world leaders to the poorer countries?  The diversity of growth rates would seem to indicate not.  Is each country then not innovating — with varying degrees of success — by building its culture-specific net for catching and transmitting global innovations throughout the nation?

I don't know about Tiger Mom parenting, effectively channeled corruption, or "culture-specific nets", whatever those are. I do know, however, that Solow catch-up growth is not about TFP increase or the diffusion of innovation!

There are basically two kinds of catch-up growth. The first is where you cheaply copy innovations from countries at the technological frontier. That's what Tyler is talking about. But the second, Solow catch-up growth, is far simpler - it's just about capital accumulation.

Countries don't start out with capital - they have to build it. So they save some of their production each year and use it to build productive capital (or trade it to other countries for capital). They do this until they have so much capital that they hit the point of diminishing returns, and depreciation starts to get so costly that it doesn't make sense to build any more capital (per worker).

Really simple. Save money, build capital. And that's exactly what China has been doing. Here's a graph from a Federal Reserve Board discussion paper from 2013:

A very smooth exponential increase in the capital-to-labor ratio.

Now of course, in the Solow model, that red line should flatten out and turn into an S-curve eventually, as the K/L ratio reaches the steady state. That day of flattening will be delayed by productivity improvements - i.e., by the other kind of catch-up growth (plus any original innovation China does along the way).

We don't need Tiger moms, culture-specific nets, or increasing returns to scale to explain that.

In fact, though China's growth looks more productivity-driven than some other Asian economies, It is probably less productivity-driven than Japan's catch-up was. If you want to look for Asian countries with cultural secret sauces, I'd start with Japan instead of China. Remember, when we talk about China, we're talking about a country whose per capita GDP is still only about a quarter of the countries at the frontier. And it's not yet clear how rich China will get before its growth slows dramatically.

The question of how technology diffusion happens is, of course, one of the great unsolved and under-studied mysteries of economics.