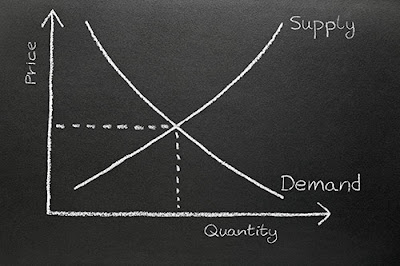 Economics is a big, big tent. Within econ there are many schools of thought. One of these is what I call "101ism" (I didn't invent the name but I forget who did). 101ism is the set of ideas that most people take away from Econ 101.

We all know basically what 101ism says. Markets are efficient. Firms are competitive. Partial-equilibrium supply and demand describes most things. Demand curves slope down and supply curves slope up. Only one curve shifts at a time. No curve is particularly inelastic or elastic; all are somewhere in the middle (straight lines with slopes of 1 and -1 on a blackboard). Etc.

Note that 101 classes don't necessarily teach that these things are true! I would guess that most do not. Almost all 101 classes teach about elasticity, and give examples with perfectly elastic and perfectly inelastic supply and demand curves. Most teach about market failures and monopolies. Most at least mention general equilibrium.

But for some reason, people seem to come away from 101 classes thinking that the cases that are the easiest to draw on the board are - God only knows why - the benchmark cases.

You see examples of this all the time in the media and in discussions with people who have taken some econ, but I want a concrete example, so I will pick on a friend of mine: Josh Barro. Josh is a wonderful human being (and once had me on MSNBC to discuss men's fashion), and he is quite smart as well. But today I did notice him displaying a bit of 101ist thought in a Twitter discussion: 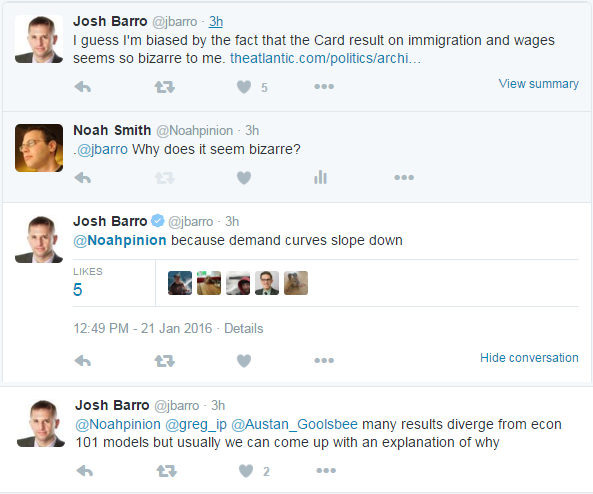 Josh, I apologize for picking on you! This is only one small example out of many, many I see all the time. It was just a convenient one. I promise to buy you a beer as recompense.

First of all, notice that "immigration has a big negative effect on native-born wages" - what Josh calls "econ 101 models" is actually a much stronger result than 101 teaches! In 101, demand curves may slope down, but they need not slope down very much. If demand curves are very elastic (i.e. flat), then a large positive supply shock will not decrease price very much. In other words, if labor demand is elastic, then we'd expect to see a very small negative impact of immigration on native-born wages - which is, in fact, exactly what we see in study after study (survey paper 1, survey paper 2).

So a very small negative effect on wages is perfectly consistent with 101. The Card and other immigration papers are not inconsistent with 101 in the slightest. But 101ism demands that elasticities be somewhere in the middle (because slope 1 and -1 lines are easy to draw on a board), so effects are never supposed to be very small. 101ism says that moderate elasticity should be the benchmark, and very high or low elasticity is a puzzle that needs special explanation.

Now suppose we go beyond 101 itself, to 401. Now we're thinking about general equilibrium. In general equilibrium, a positive labor supply shock can induce a positive labor demand shock, so that wages go right back to where they were before. That demand response might come pretty quickly. If we go beyond 401 and think about things like variable capital utilization, then the demand response might come very quickly, so even the instantaneous effect of immigration on wages would be smaller than partial equilibrium analysis would suggest.

Anyway, this is my problem with 101ism. It treats certain theories as benchmarks even though they have no right to be. Which means that it treats lots of empirical results as puzzles even though they don't deserve to be.

People, simplicity does not equal generality.

So what is the antidote for 101ism? If 101 classes already include things like perfectly elastic and perfectly inelastic curves, monopoly, general equilibrium, and market failures, then what can educators do to prevent students turning into 101ists? My recommendation is the same as before: Put empirics in 101. Seeing results like Card's that contradict simple 101ist stories - but can be easily explained with 101 concepts - will force students to think about the fact that elasticities are not always moderate, that partial equilibrium is not always the whole story, that market failures sometimes exist, etc. etc. In other words, empirical results will aid in giving people a fuller, richer understanding of basic econ theory in all its versatility.
Author: Noah Smith Posted at 7:45 PM