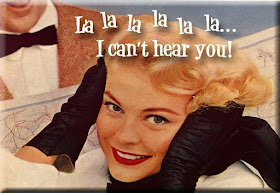 A few weeks ago, I disagreed with a Russ Roberts post about empirical economics. I wrote that if you don't rely on empirical evidence or formal theory, you're going to just end up relying on intuition gleaned from half-remembered simplistic theory and non-careful evidence:


[One] option [for making policy predictions] is to rely on casual intuition - not really theory, but a sort of general gestalt idea about how the world works. If we're of a free-market sort of persuasion, our casual intuition would tell us that minimum wage is government interference in the economy, and that this is bound to turn out badly. Russ seems to be advocating for this...

In a recent episode of EconTalk, Russ demonstrates this "intuitionist" approach, as applied to the question of the minimum wage. Russ is interviewing Andrew Gelman about problems with statistics in empirical research. Andrew explains things like p-hacking and the "garden of forking paths" (his colorful term for data-dependent testing decisions), which make reported confidence bands smaller than they should be and thus lead to a bunch of false positives.

Russ uses Andrew's explanations as reason to be even more skeptical about empirical results that don't match his intuition. Because I can't find an official transcript, here is an unofficial transcript I just made of the relevant portion (Disclaimer: I don't know the standard rules for making transcripts of things; I edited out pauses and other minor stuff):


ROBERTS: But let's take the minimum wage. Does an increase in the minimum wage affect employment, job opportunities for low-skilled workers - a hugely important issue, it's a big, real question. And there's a lot of smart people on both sides of this issue who disagree, and who have empirical work to show that they're right, and you're wrong. And each side feels smug that its studies are the good studies. And I reject your claim, that I have to accept that it's true or not true. I mean, I'm not sure which...Where do I go, there? I don't know what to do! I mean, I do know what to do, which is, I'm going to rely on something other than the latest statistical analysis, because I know it's noisy, and full of problems, and probably has been p-hacked. I am going to rely on basic economic logic, the incentives that I've seen work over and over and over again, and at my level of empirical evidence that the minimum wage isn't good for low-income people is the fact that firms ship jobs overseas to save money, they put in automation to save money, and I assume that when you impose a minimum wage they're going to find ways to save money there too. So it's not a made-up religious view, I have evidence for it, but it's not statistical. So, what do I do there?

I think several things are noteworthy about Russ' monologue here.

First, Russ claims that minimum wage studies are "full of problems" and have "probably been p-hacked". As far as I can tell, he doesn't have any evidence for this, or can even name what these problems are. He doesn't seem to know, or even consider, how precise the authors' reported confidence intervals in any of these studies even are in the first place - did they report p-values of 0.048, or 0.0001?

So Russ seems to have interpreted Andrew to mean that all empirical studies are p-hacked, and are therefore all unreliable. Did Andrew want to convey a message of "Don't pay attention to data, because all hypothesis tests are irrevocably compromised by p-hacking and data-dependent testing, so just go with your intuition"? I doubt that's the message Andrew wanted to convey.

Second, Russ' preferred method of analysis is exactly the "intuitionism" I described above. Russ states his intuition thus: Because companies do lots of things to try to lower costs, minimum wage must be bad for low-income people. But that intuition is not nearly as rich as even a very simple Econ 101 supply-and-demand theory. In the simple theory, if the elasticities of labor supply and demand are low, the minimum wage has only a very small negative effect on employment - consistent with the empirical consensus.

And if you model a firm, you find that there are a number of ways companies can save money in response to a minimum wage increase other than firing workers. They can raise prices. They can reduce markups. They can reduce the salaries of higher-paid workers. There are all kinds of margins for cost minimization not included in Russ' intuition, but which could explain the empirical consensus.

Also, a simple monopsony model shows that cost minimization can make a minimum wage raise employment rather than lower it. A monopsonistic company lowers costs by paying workers less and producing an inefficiently small quantity. Minimum wages, by raising costs, actually increase efficiency and raise employment in that simple model, which would also explain the empirical consensus.

But Russ' intuition doesn't include simple monopsony models, multiple margins of cost reduction, or inelastic supply and demand curves. The intuition is just one piece of a theory. That's why I think intuitionism, as a method for understanding the world, is strictly dominated by a combination of formal theory and empirical evidence.

Finally, by declaring empirical economics to be useless, Russ is condemning the majority of modern economics research. I'm not sure if Russ realizes this, but empirical, statistical research is most of what economists actually do nowadays: 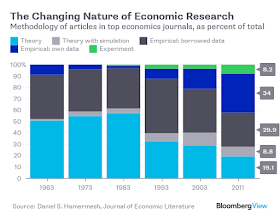 Theory papers were down to less than 30 percent of top journal papers in 2011, and the trend has probably continued since then. By dismissing empirics, Russ is dismissing most of what's in the AER and the QJE. He's dismissing most of the work that economics professors are doing, day in and day out. He may not realize it, but he's claiming that the field has turned en masse toward bankrupt, useless endeavors.

That is a bold, aggressive claim. It's a much stronger indictment of the economics profession than anything ever written by Paul Krugman, or Paul Romer, or Brad DeLong, or any of those folks. I don't know if Russ realizes this.

Russ responds in the comments. He notes that a slightly abridged transcript of the Gelman interview can be found at this link.

David Childers notes in the comments that correcting for publication bias generally results in smaller estimates of the disemployment effects of minimum wage.
Noah Smith Posted at 10:46 PM
Share