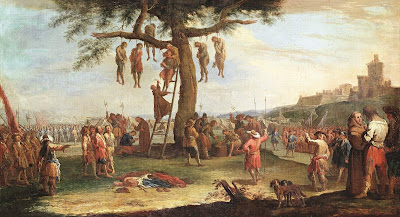 I know sweeping historical analogies are silly, but I've always been partial to the analogy between the Middle East's recent decades of war and the Thirty Years War of early modern Europe. So let's run with that and see where it takes us.

In the early 1600s, most of Europe was involved in a gigantic war (which really lasted more than 30 years if you count other associated wars). A good history is C.V. Wedgwood's creatively named classic, The Thirty Years War.

Most people think of the war as a Protestant-vs-Catholic fight -- an extension and climax of the Wars of Religion that had been going on in Europe since the Reformation a century earlier. And religion was a big fault line between the two sides, and a big motivator for both people and regimes to keep fighting. But Wedgwood believes that the war was primarily a proxy contest between France and Spain for control of Europe. "There was enmity between France and Spain" is an often-repeated line throughout the book.

Spain, at that time, was under the control of the Habsburg family, Europe's most famous set of blue-blooded aristocratic schemers. Europe was still in transition between the old feudal form of political organization and the modern nation-state system, and the Habsburgs definitely represented the former -- besides Spain, they had tons of possessions in Germany, Belgium, and elsewhere, in addition to the Spanish Empire in South and Central America. The Habsburgs wanted to control Germany, which was the richest and most densely populated part of Europe, but which at that time was divided into a ton of tiny little micro-states loosely under the control of the increasingly irrelevant and rickety Holy Roman Empire: 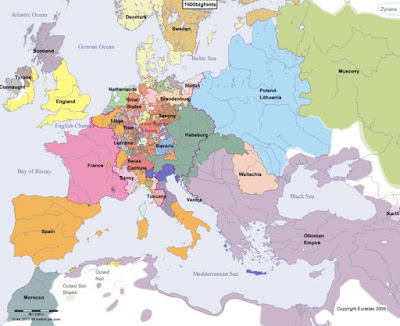 The Habsburgs had maintained loose domination of Germany by constantly winning the elections for Holy Roman Emperor, but when some Protestant states rebelled against the emperor, they decided it was time to conquer Germany for real. They had massive resource wealth (silver and gold) from the New World, and they had the feared Spanish fighters, so they seemed to have a pretty good shot.

But that didn't work out, and one big reason was the Habsburgs' chief rival in Europe: France. France was Catholic, but had no desire for pan-Catholic solidarity with the Habsburgs. When the war broke out, France was in the process of becoming an absolute monarchy, and -- especially after subduing the Protestant Huguenot rebellion -- looked increasingly like an effective centralized state. Under the effective control of the famous Cardinal Richelieu (villain of the Three Musketeers!), encouraged first Denmark and then Sweden to enter the war against the Habsburgs, as well as supporting various Protestant leaders. In the end, the Habsburgs were unable to conquer most of Germany, and their holdings in the south part eventually turned into the Austrian Empire.

Spain finally got pissed enough to attack France directly, but -- to many people's surprise -- France gave them the boot. France's counterattack also failed, but by then Habsburg power in Europe was broken forever. The idea that a noble house with distributed feudal possessions could dominate the region was over, and absolute monarchies and modern nation-states started their long climb to preeminence. In fact, the Peace of Westphalia, the series of treaties that officially ended the Thirty Years War, is often cited as the blueprint for the modern concept of state sovereignty.

In the modern Middle East, a royal family with ample flows of natural resource wealth (the House of Saud) is engaged in a long proxy conflict with a autocratic, centralized rival state (Iran). Here's a slightly out-of-date map, from back when the Islamic State still had territory: 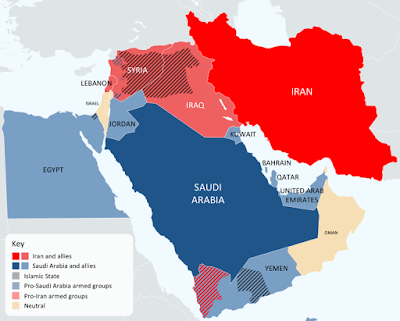 Religion is involved, as Iran is Shia and the Saudis are Sunni; both sides have sought at various times to whip up religious fervor as a weapon against the other. But most observers think the conflict is as much about which regime controls the Middle East as it is about religion.

The conflict has its roots in an ancient Arab-Persian rivalry, but it really began after the Iranian Revolution of 1979. Ayatollah Khomeini was hostile to all of the Middle Eastern monarchies, and wanted to replace them with Islamic Republics. In response, Saudi Arabia backed Saddam Hussein's invasion of Iran in 1980; the king of Saudi Arabia actually wrote to Hussein and told him to "crush these stupid Iranians". The Iran-Iraq War killed around 800,000 people, and Saudi Arabia and Iran nearly came to blows at least once during that conflict.

The Saudi-Iranian conflict quickly became entangled with religion. Sunni and Shia Muslims had coexisted more-or-less peacefully for a long time, but Saudi Arabia and Iran have both been eager to destroy that comity in order to motivate their citizens and proxies. In 1987 Khomeini said that "these vile and ungodly Wahhabis are like daggers which have always pierced the heart of the Muslims from the back”, and called the Saudis “a band of heretics". In that same year, Iranian pilgrims and Saudi security clashed at the Hajj in Mecca, leaving over 400 people dead. Meanwhile, Saudi Arabia increasingly sponsored and supported Sunni radicalism around the world, partly as a bulwark against Iranian influence. The Saudis also repressed Shia within their borders, and there are accusations that the regime supports anti-Shia sentiment abroad as well.

The Saudi-Iranian rivalry was effectively put on hold during the Gulf War in the early 1990s, but it never quite went away. Iran and the Saudis backed rival factions in the Afghani Civil War in the late 90s, and Iran almost went to war with the Saudi-supported Taliban. In Lebanon in the 2000s, the Saudis backed efforts against Iranian-backed Hezbollah, and Lebanon has continued to be a locus of proxy conflict. During the U.S. invasion of Iraq, the Saudis supported the U.S. presence while the Iranians backed Shia militias.

But the rivalry really kicked into high gear after the Arab Spring in 2011. A Shia uprising in Bahrain was crushed by Saudi soldiers, and the Sunni Bahraini royals accused Iran of stirring up the unrest. The Saudis supported some of the rebels in Syria, while Iran vigorously supported the government and even sent troops to help. Now, Saudi Arabia is fighting a war against the Shia Houthi movement in Yemen, which many claim is backed by Iran.

This conflict has now been going on for 40 years. By my rough guesstimate, the various wars related to the conflict have now cost about 2 million lives. That is a lot less than the Thirty Years War, in both absolute numbers and percent of population, but the carnage is still significant.

The House of Saud is a bit reminiscent of the Habsburgs -- a hidebound, sprawling royal family supported by natural resource wealth (oil, vs. gold and silver from the Spanish colonies). That would put Iran in the role of France, its autocratic/bureaucratic rival. Like France, Iran has made use of various proxies -- Bashar al-Assad, Hezbollah, the Houthis, etc. And like France, Iran has generally chosen the more effective proxies -- Assad has crushed the rebels (with Russian help), Hezbollah dominates its Lebanese rivals, and the Houthis have proven far better fighters than Saudi's Yemeni proxies, and have even scored wins against Saudi Arabia's own military.

But there are at least two big differences between Iran now and France in the 1600s. First, whereas France crossed the religious divide and employed Protestant proxies, Iran's proxies are mostly either Shia or quasi-Shia sects like the Syrian Alawites. Thus, there seems to be the possibility that the Saudi-Iranian conflict will stay religious in character, as opposed to the Thirty Years War, where the religious aspect eventually took a back seat to the intra-Catholic conflict between France and Spain.

Second, Iran has a lot of oil too. While this might appear like an advantage, it can lead to the dreaded Resource Curse (which arguably helped sink Spain in the Thirty Years War, when its shipments of silver were interrupted and it went bankrupt several times due to the habit of relying on steady flows of free money). Oil wealth could actually inhibit Iran from becoming an effective modern bureaucratic state. It seems possible that both the Saudis and the Iranians will be able to fuel their conflict with oil money for years to come, without being forced to cultivate more effective economic institutions. While France came out of the Thirty Years War looking stronger than ever, Iran might not be so lucky.

Meanwhile, the Saudis differ from the Habsburgs in one important way -- they exist in the modern, Westphalian world of nation-states. Thus, they cannot hope to gain influence by taking personal possession of territory, as the Habsburgs could. Instead, their hope for long-term influence probably depends on continued use of proxies in places like Iraq, Syria, and Yemen. And the Saudis will probably try to motivate and bind those proxies with religious ties.

In other words, while the Thirty Years War signaled a shift from religion to nationalism as the organizing principle of Europe, the Saudi-Iranian conflict might not be able to repeat the trick for the Middle East -- instead, it might leave the region more polarized between Sunni and Shia.

Another big difference between the wars is the importance of outside powers. The Thirty Years War really had only one relevant outside superpower, the Ottoman Empire, which offered limited help to some anti-Habsburg forces. But the modern Middle East has seen major interference from both the United States and Russia. The U.S. invaded and occupied Iraq, helped smash ISIS, supported autonomy for the Kurds, has provided financial and military support for the Saudis, and has occasionally threatened war with Iran. Meanwhile, Russian intervention proved decisive in Syria. Middle Eastern oil is so important to China's economy that China could conceivably become involved in the region as well.

Thus, while the Thirty Years War ended with the consolidation and increased independence of European proto-nation-states, a similar process in the modern Middle East might be harder to achieve, thanks to the influence and domination of outside superpowers.

Still, it does seem like the Saudi-Iranian conflict might lead to big and lasting changes in the Middle East, and some of those changes might not be too dissimilar from the aftermath of the Thirty Years War. The depredations of ISIS and other extremist groups -- almost as savage as the atrocities in 1600s Europe -- might convince Middle Easterners that fundamentalist sectarian warfare is not a source of power and unity, but a one-way road that leads nowhere good. Already, the legitimacy of the Islamic Republic in Iran has eroded, as young people come to resent the constant conflict, social repression, and lack of economic development.

Second, the wars might end up leading to increased nationalism. If pan-Shia and pan-Sunni solidarity are seen as leading to endless conflict, young Middle Easterners may instead decide to think of themselves as Syrians, Iraqis, or Yemenis. Granted, this future looks fairly remote right now, but the rise of nationalism in Europe took centuries.

Third, the constant warfare might simply create a weariness with war and conflict, especially when paired with the big drops in fertility rates across the region. After the smoke clears from the wars in Syria, Yemen, Iraq, and elsewhere, the Middle East might enter an era of enlightenment, much as Europe did. Science, literature, and institution-building might replace violence as sources of mass inspiration. As oil becomes less important to the global economy, Middle Eastern states will have the chance to shrug off the Resource Curse and diversify their economies to more productive, inclusive industries.

Though the Thirty Years War was insanely savage and destructive, some good things did come out of it in the end. I hope that the same is true of the Middle East's current era of wars.
Author: Noah Smith Posted at 8:17 PM