In defense of private equity: Japan. 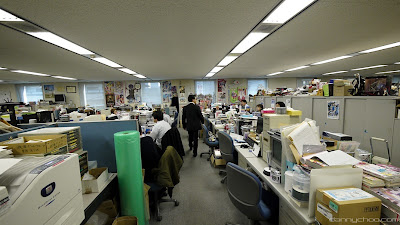 Taking a short break from my blogging break here, to wade into the controversy over private equity.

In general, I am a supporter of private equity, so first a disclaimer. There appears to be a real and genuine problem with the private equity industry in the U.S.: our tax code encourages private equity companies to load their acquisitions up with too much debt. That is a relatively recent problem, and one that seems fixable.

Anyway, I generally support private equity. Why? Because of Japan.

Fact 1: In Japan, there is no big private equity industry, because it is very difficult to do a leveraged buyout of a company. The Japanese government allows companies to defend themselves from takeovers in ways that are illegal in America. Also, Japanese companies often hold each other's shares, a practice known as "cross-shareholding", which tends to prevent hostile takeovers. Cross-shareholding creates huge financial risks; however, many of the Japanese companies that engage in cross-shareholding are big banks that are backed by the government (much as ours are here in the U.S., but more explicitly), so this risk is assumed by the Japanese taxpayer. For a comprehensive primer on Japanese corporate governance, see here.

Upshot: In Japan, private-equity firms cannot buy companies and force them to restructure.

Fact 2: Japan has a productivity problem. We think of Japan as being super-productive, and in fact some industries (and most export-oriented factories) are. But overall, Japanese productivity kind of stinks. Since at least the 90s, Japan's Total Factor Productivity has lagged far behind that of the U.S. Nor is this due (as Ed Prescott has tried to claim) to a slowdown in technology; it appears to be a function of how resources are allocated within and between Japanese companies.

Although it's hard to measure white-collar productivity, anecdotally, it is horrendous in Japan. Employees sit idly in front of their computers waiting for the boss to leave so they can go home, or make busy-work for themselves, copying electronic records onto paper (yes, this is real!). Unproductive workers are kept on the payrolls because of lifetime employment, with high salaries guaranteed by the system of seniority pay. To this, add endless meetings, each of which must be exhaustively prepared for in advance. Layer upon layer of bureaucracy with poorly defined accountability. Pay based entirely on tenure rather than merit.

I have seen a little of this with my own eyes, but if I had to work full-time for a Japanese company for any extended period of time, I would probably quit and join the yakuza. It is baaad. Like, Brazil-the-movie-bad.

Would private equity shake up this insane little world? I think it would. In the U.S., Steven Davis, Josh Lerner, and their co-authors found that private equity firms have a positive impact on the productivity of the companies they buy out. Here is a survey of other research on the topic; basically it all agrees that productivity gets a boost when a firm gets acquired.

It is my opinion that Japan desperately needs this sort of productivity boost.

Now, the knock against private equity (besides the debt problem I mentioned at the beginning of this post) is that it screws over the workers of the companies it buys. In fact, it does seem to be the case that private equity firms achieve most of their productivity gains by firing people. The stereotypes are true. So private equity's detractors say: Workers may not be shareholders, but they are stakeholders. When workers sign on to work for a company, and thus sacrifice their mobility and outside options, they enter into an implicit contract with a company, that says, essentially, "This company will try to live as long as possible." When private equity companies chop up and sell a company, this implicit contract is violated, and the worker-stakeholders lose out. (Note: Just to pat myself on the back, I thought of the "implicit contract" thing before reading this Larry Summers paper! But it says basically the same thing.)

And I agree with that. And I think it is a real cost of letting private equity do its thing. But I don't think it's as big a cost as people make it out to be. Again, the reason is Japan. In Japan, the implicit contract between worker and firm is far more important than in the U.S.; companies there view workers as very, very important stakeholders. This is, in fact, why the government makes it so hard to take over companies; Japan is a Bain-basher's dream land.

But - and here I venture into the realm of anecdotes and intuition - I do not think that Japanese workers are happier than American workers. First of all, the low-productivity office environment I described takes its toll. Long wasted overtime hours separate men from their families. Squelched individual initiative creates feelings of frustration and stasis. The impossibility of switching companies, the lack of merit pay, and the pre-determined nature of promotions leave few career goals to strive for. And, most importantly, the binding of employees to their employers creates a pervasive feeling of powerlessness (無力感) and fear; if bad decisions or market shifts force a company to lay off workers, those workers have basically no hope of finding a similar job elsewhere. No wonder the suicide rate in Japan is so astronomically high. The bulk of those suicides are men of working age.

And I didn't even mention women. Anyone who knows Japan knows how poorly Japanese women are utilized (and how poorly they are treated) at many Japanese companies. It is disgusting, and it is harming Japan's economy big-time. One reason is the impossibility of winning discrimination lawsuits in Japan's hidebound legal system. But I think a bigger reason is related to corporate governance; since there is no pressure on these zombie companies to boost productivity, there is no reason for them to hire more women or make better use of the women they already have. Private equity would change that, I think. What private equity does is force companies to cut labor costs; one big way of cutting costs is to replace your existing workers with workers who are of similar quality but are paid less. In a country with a big gender pay gap, those alternative workers are known as women.

So I say: Japan should let the corporate raiders raid. Sic the pirates on the zombies.

And although American critics of private equity have valid points, I think they should look to Japan before they denounce the role that Bain Capital and company have played in our economic and social development. By all means, change the tax code to discourage private equity companies from over-leveraging their acquisitions. Close the carried interest loophole. Create re-employment services to help the workers laid off in restructuring. But for pete's sake, don't wish that our corporate culture was like Japan's. You wouldn't like it.


Update: Paul Krugman chimes in, with a claim that the rise of buyout firms increased inequality. Sorry, maybe it's true, but I don't see the proof here. Correlation does not equal causation, and a lot of other stuff was going on at the time, in particular globalization, the death of unions, and changes in technology.

Update 2: Some people have been asking "Well, maybe private equity boosts productivity in the short term, but doesn't it reduce investment in the long term?" I was curious so I did a little Googling. Here is a paper by Jarrad Harford and Adam Kolasinski purporting to show that private equity firms generally create more long-term value than they destroy. Here is a private study showing that firms bought by private equity tend to increase, not decrease, their investment rates in the medium-term. Here is a paper by Josh Lerner and others showing that companies bought by private equity maintain about the same rate of research and development. But on the other hand, Josh Kosman's new book purports to show that companies bought by private equity tend to go bankrupt. And the overleveraging thing appears to have become a lot more common recently; this may mean that private equity has been more destructive recently than in the 80s, but the long-term data isn't in yet. My tentative conclusion: If done right, private equity creates value and improves productivity, but we need to close the interest tax deduction loophole that encourages overleveraging.

Update 3: Here's a recent news story about just the kind of low white-collar productivity that I'm talking about...
Author: Noah Smith Posted at 2:47 AM