The state of the Macro Wars 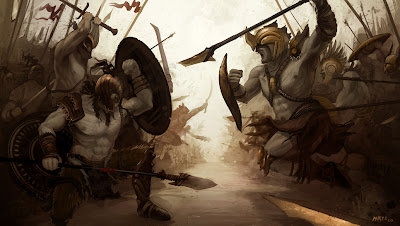 New Update: The pessimism in this post has been proven (somewhat) wrong. Bernanke just announced that the Fed will buy $40B of mortgage-backed securities every month until the economy improves. This is notable for two reasons. First, unconventional assets are being purchased rather than U.S. government bonds; this sends a strong signal that the Fed is considering the full range (or at least a fuller range) of tools at its disposal. Second of all, the asset purchases are open-ended, meaning that the Fed is targeting a level rather than a growth rate; Bernanke intends to force the U.S. economy to make up the ground it lost in the recent recession, rather than simply to resume the pre-recession growth rate at a permanently lower level. It looks like the Pro-Easing Alliance has the Hard-Money Coalition on the back foot, for now...

It's hard to deny that the Macro Wars have died down. Paul Krugman, whose crusade for fiscal stimulus often made him resemble a bear taking swipes at a horde of angry bees, wrote this today:

I’ve been pounding the drum for Keynesian policies ever since the financial crisis struck; I was one of the few people to talk negatively about Obama’s inaugural address, because it seemed to miss the point that we were suffering from inadequate demand; and I was frantic about the inadequate size of the stimulus.

So, am I upset over the virtual absence of demand-side rhetoric in Obama’s speech yesterday?

Let’s be realistic: the public doesn’t get Keynesian economics. The president could use the bully pulpit to try and change that, and I’ve been urging him to do that. But not two months before an election.

And we know that the administration has demand-boosting on its mind; the American Jobs Act was very much a Keynesian-type plan, and everything I know says that it’s a good view of the kind of thing the inner circle supports. It’s reasonably certain that there will be attempts to provide more demand if Obama wins, and that’s all you can ask for at the moment.

Meanwhile, John Cochrane, Krugman's principal antagonist in the Macro Wars, has called fiscal stimulus "an economically interesting proposition", and has come out against the type of "austerity" being practiced in Europe. And people in general seem to have realized that stimulus is politically feasible when the economy is in free-fall, but generally not during long slow recoveries - "everyone is a Keynesian in a foxhole". The Stimulus War didn't lead to anything remotely resembling a consensus, but all parties (including the various other "sides" in the conflict, like Scott Sumner) seem to want to spend their rhetorical resources elsewhere for the moment.

But another Macro War is brewing out here in the Econosphere. This time, it's about monetary policy. Unlike in the fight over stimulus - an idea that had been out of the academic mainstream for decades - the battle lines in the Monetary Policy War are pretty clearly drawn. On one side we have people who think monetary policy should be focusing on boosting GDP - this includes monetarists like Miles Kimball and David Glasner, "NGDP Level Targeting" evangelists like Scott Sumner and David Beckworth, Keynesians like Krugman, Brad DeLong and Mark Thoma, and monetarist-leaning folks like Karl Smith, Matt Yglesias, Ryan Avent, and Evan Soltas. Although there are flashes of internal dissent, all of these folks are essentially allies; they support the idea of a Fed that is far more active in pumping up growth, by either "printing money and buying stuff", or by promising to do so in the future. And they are backed up by the academic firepower of Mike Woodford, who wrote the book on New Keynesian economics, and has come out in a big way in favor of more monetary easing. Even Tyler Cowen, a big detractor of Keynesian ideas, has cautiously endorsed the idea. (Update: Christina Romer and a number of Fed officials have also come out in favor of more easing.)

The forces arrayed against the Pro-Easing Alliance seem at first glance to be pretty low on manpower. Chief among the econ-bloggy opponents of easing are John Cochrane, John Taylor, and Steve Williamson. They argue that the Fed should worry more about preventing inflation than boosting output. The arguments here are that A) the Fed's ability to boost output is very weak, and B) inflation is a much bigger danger than people realize.

However, the illusion that the Hard Money Coalition is outnumbered is just that - an illusion. Behind them stand a vast shadow army of Wall Street Journal op-ed writers, "Austrians" who believe that loose money is the root of all evil, and Fed officials like Jim Bullard, Narayana Kocherlakota, and Charles Plosser who instinctively worry about inflation first and foremost. That army has been powerful enough to stay the hand of Ben Bernanke, a New Keynesian who as an academic was a champion of an activist Fed.

Furthermore, the battleground is different this time. With stimulus, the audience was Congress, which is strongly biased toward looking like it's doing something. With monetary easing, the target audience is the Fed, which is staffed by technocrats. Most of those technocrats were educated to believe that the Fed's inflation-fighting credibility is its most valuable asset. They were also trained at a time when the 70s were fresh in people's minds and the Depression-like crisis of 2008-present was still far in the future.

Finally, the deck may be stacked against the pro-stimulus side. Supporters of fiscal stimulus believes that it works independently of expectations, but pro-easing monetarists all admit that expectations are crucial to the success of monetary easing, especially at the zero lower bound of nominal interest rates. This gives the home-court advantage to the Hard Money Coalition. To win, all they have to do is convince the public that the pro-easing consensus is weak enough that promises of easy money into the indefinite future will inevitably be broken. Casting doubt on the expansionary power of the Fed can therefore be a self-fulfilling prophecy.

In other words, monetary easing may be more popular among economists than was fiscal stimulus, but may end up being a harder sell. It's sad to say, but the Macro Wars may seem increasingly like the Trojan War, with the Pro-Easing Alliance playing the role of Cassandra...

(Note: Oh, you want to know which side I'm on? Although I'm skeptical of New Keynesian models and monetarist ideas, I agree with Tyler Cowen that unemployment is obviously a much much much bigger problem than the faint specter of 4% or 6% or even 8% inflation, so we should try quantitative easing, forward guidance, NGDP targeting, etc. So count me on the side of the Pro-Easing Alliance. Though for all the reasons listed above, I'm not too sanguine about our chances of victory...)

Update: Underscoring my pessimism about monetary easing, here Mark Thoma asks economists about the chances that the Fed will implement NGDP targeting (one of the simplest and most-discussed forms of monetary easing) over the next 5 years. Most of the 44 economists answered either "low" (18) or "very low" (13), with some giving "even odds" (8) and a few saying "zero" (4). If surveyed, I would have answered "low", putting me near the median.
Author: Noah Smith Posted at 1:21 PM