Borrowing from the Future — Except that We Aren't 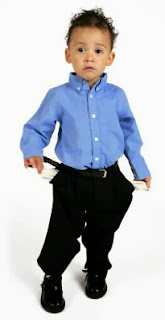 This morning’s New York Times featured an utterly clueless op-ed by Stephen D. King (not the horror writer, at least not intentionally).  It would take too long to go through all the errors and misrepresentations he managed to pull together, but one in particular deserves mention, since it is a common meme: fiscal deficits mean that “we are borrowing from future generations”.

Let’s look at this calmly.  First, suppose we have a closed economy; there is no trade and no international flows of lending and debt service.  In this state of happy isolation, the government may choose to run a budget deficit.  If it does, it issues bonds.  People who want this kind of asset buy the bonds, and it is their purchase that funds government spending not covered by tax revenue.  These bonds have maturities, so what happens when their time is up?

One of three things.  First, the bonds could be redeemed with no new bonds issued.  This would reduce the amount of bonds in private portfolios, but it would give the ex-bondholders an equivalent amount of cash to spend on something else.  The cash comes from a budget surplus, which means that taxpayers have paid in extra.  Those who don’t own bonds are now net payers to those who do.  From an accounting standpoint, however, they also gain in the sense that they are no longer liable to pay a stream of interest on the bonds into the future.

Historically, this doesn’t happen very much.  The best example is the huge deficits that the US and Britain used to finance WWII.  Neither country ran equivalent surpluses later on to “pay off” the debt.  Their economies grew, inflation eroded debt claims, and over time the debt-to-GDP levels slid back down to more reasonable levels.  Specifically, when the war bonds came due these governments simply issued more bonds to finance their redemption; they rolled over the debt.  That’s what happens in 99% of the cases, and you can see this by looking at how small and infrequent fiscal surpluses actually are.  This refinancing through issuance of new debt is option number two.

The third possibility is default.  Banana republics and governments under the influence of suicide cults sometimes do this.  ‘Nuf said.

So where is “borrowing from the future”?  Well, all government is borrowing from some people to pay other people, and paying back these debts, should it ever happen, simply reverses that flow.  Either way, money is making its way from one group to another at the same point in time.  Note that interest on the debt has nothing to do with present vs future either: the current generation, which incurs the debt, begins paying interest immediately in exactly the same way their distant descendants will.

None of this means, of course, that deficits are innocent in every respect.  To run them, the government has to be able to sell its bonds or, if the central bank is going to monetize them, the economic environment has to permit this.  (It can’t be too inflationary.)  That can break down.  Past experience can guide us in assessing how close we are to the upper limit of our fiscal space.  (The struggling countries in the Eurozone are a special case, because they don’t borrow in their own currencies.)

Ah, but you say, we are not in a closed economy.  Some of our borrowing is from foreigners, and debt service transfers money from us to them.  Some responses:

1. This is not about present versus future, but our people and their people.  After all, international interest payments, like intranational ones, don’t wait to be paid; we begin paying them right away.

2. The world as a whole is a closed economy.  If “we” are everyone in the world (and in some senses we are), there is no outside, at least economically.

3. The amount of foreign borrowing to finance fiscal deficits is not directly a function of the size of the deficit but of whatever determines our international payments position—our current and capital accounts.  To make the case that government borrowing increases the current account deficit, you have to, well, make the case.  For instance, is there a historical relationship between the size of US fiscal deficits as a proportion of GDP and corresponding current account deficits?  Show this if you can.  (In general there isn't, although the current account and the sum of net domestic borrowing, both public and private, is an accounting identity.  If two things are an identity, one does not "cause" the other because they are both the same thing.)  On a theoretical level, the idea is that issuing more public debt raises domestic interest rates, which in turn raises exchange rates, which in turn increases trade deficits.  OK, try to show that.  (The US record doesn’t provide much support.)

Incidentally, we are borrowing from the future.  We are shirking the investments we need to make so that our children and grandchildren can live in a habitable world with a well-educated population that enjoys a productive infrastructure.  No fallacy of composition there.
Author: Peter Dorman Posted at 12:21 AM