Why do non-experts think they know about macroeconomics? 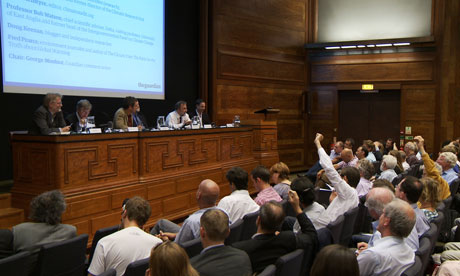 Scott Sumner asks one of the eternal questions of the econ blogosphere: Why do all these people who have never studied macroeconomics, much less done it as a job, have all these strong opinions and viewpoints, and seem to think they know more than the experts? His answer is that macro seems deceptively similar to things in people's daily lives:

Perhaps because people can immediately recognize that fields like physics and biochemistry are way over their heads, but macro looks deceptively simple. Macro uses a lot of terms like money, saving, interest rates, investment, income, demand, unemployment, inflation, exchange rates, debt, deficits, etc., that seem to correspond to things in our everyday experience. And we obviously do have opinions on things in our everyday experience. And we are entitled to those opinions. But in fact almost none of these terms mean the same thing in macro as in everyday life.

I do think this is part of the story, but I think there are some other reasons too:

1. Macroeconomics is relevant to most laypeople. String theory, to use Scott's example, is not. String theory is something you hear Brian Greene or Michio Kaku talk about, and you think "Wow, neato, the Universe is mysterious and funky!", and then you never think about it again. Macroeconomics is something related to our jobs and our investments. It affects us every day. Notice that laypeople do not often hold forth on game theory or decision theory.

2. Macroeconomics has political implications. Many people have political agendas. The "heterodox" people you meet in the blogosphere are almost all just leftists who see mainstream econ as a tool of the neoliberal oppressor, and since macro is by far the most visible branch of econ, they equate "econ" with "macro" and bash it. Or take the "Austrians", whose goal is actually to make econ into a tool of the neoliberal oppressor, for real. Then you have a whole bunch of people who aren't pushing political agendas, but who feel that macroeconomists are pushing agendas, and don't like that. In fact, some macroeconomists are pushing political agendas, though I think it's a clear minority (no, I won't name names). This is also why a lot of laypeople get involved in climate science debates.

3. There is the perception that macroeconomists don't understand their own subject. The Great Recession convinced a lot of people that macroeconomics hasn't solved any of the problems it was created to solve. Contrast that with physics or bio or chem, which have very obviously given us a lot of the awesome stuff that makes our society rich. In addition, you have very public and acrimonious debates between macroeconomists like Krugman, Cochrane, and Sumner. That convinces a lot of people that there is no consensus within macro, which in turn makes them suspect that macroeconomists haven't gotten any answers out of the Universe. If the experts don't understand anything, why can't the amateurs weigh in?

I am not annoyed by normal people's penchant for butting into macro debates (though the "Austrian" and "heterodox" people do annoy me, since they approach things in a tendentious rather than an inquisitive manner). I think it's natural. Sure, a lot of stupid stuff gets said, but let he who is without sin cast the first stone!

Ryan Decker writes in response to my Reason #3 above:


When I fire up my web browser I'm not bombarded with confident non-expert opinions about earthquakes, despite seismology's apparent inability to predict them.

I think normal people realize that that certitude is basically never warranted. Yes, those economists often (but not always) have some evidence to back up their claims. But not the kind of evidence that people have in disciplines where data is more abundant, controlled, and replicable. Which brings me to Ryan's second point:

Moreover, there are the usual talking points: how well would physics and chemistry be doing if they had the physics/chemistry equivalent of 5 or maybe 10 data-rich, non-experimental recession observations to study? We can interpret the massive success of physics and chemistry and relative lack of success in macroeconomics as meaning physicists and chemists are better at their jobs than are economists, or we can interpret it as meaning that getting reliable answers in economics is a lot harder than it is in physics.

Yep. Exactly. If macroeconomists haven't gotten the kind of answers natural scientists have gotten, it's because macro is harder to get answers out of, not because macroeconomists are less intelligent or less honest. I think that's something that more laypeople should understand. That's why I think blog posts like this one by Mark Thoma, this one by Steve Williamson, and this one by David Andolfatto are the most important.

A scenario in which economists know much more about economics than the typical lay person is not inconsistent with the latter interpretation. I also think it's a stretch to jump from the notion that there is much we don't know about recessions to "macroeconomists haven't gotten any answers out of the universe."

Also true. Macroeconomists know more than a lot of people think they do. That doesn't mean they know a lot. And macro discussions in the public sphere tend to focus more on the contentious stuff - the stuff where no one really knows all that much. That's where normal people feel justified jumping in. If you tell them that investment is the most volatile component of GDP, they're not going to argue. If you tell them that the central problem of depression prevention has been solved, they're going to argue, and in my opinion they're right to argue.

Robert Waldmann also chimes in. He thinks it's mostly about politics, and that macroeconomists don't really know any facts that an intelligent amateur couldn't quickly discover for herself.
Author: Noah Smith Posted at 3:30 PM