T/F: Romer thinks that economists should not try to use the mathematics of Debreu/Bourbaki and should instead use math in the less formal way that physicists and engineers use it...

[H]and-waving and verbal evasion...is the exact opposite of the precision in reasoning and communication exemplified by Debreu/Bourbaki, and I’m for precision and clarity.

But that comment got me thinking about formalism in econ math, and I thought I'd share some thoughts.

I've never actually read any Bourbaki papers, but Bourbaki was a club of mostly French mathematicians who got together in the 1930s and insisted that mathematicians be very formal. They got their wish, and the result is the rigorous, formalistic style of modern math papers. But physicists and engineers never followed this convention, preferring to derive essential results and let mathematicians pick up after them by putting in the formality.

An example of the formal style would be "The Simple Theory of Temptation and Self-Control," by Farak Gul and Wolfgang Pesendorfer. This paper introduces a wrinkle to the standard classical theory of intertemporal consumer decision-making - they allow people to have preferences over the sets of choices they are given, such as when people on a diet might not want to see the dessert menu. This wrinkle is inserted in the form of a new "axiom", called the Axiom of Set Betweenness. The presentation in the paper tends to look like this: 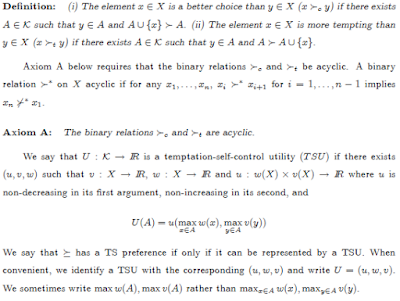 An example of the informal style would be "Golden Eggs and Hyperbolic Discounting," by David Laibson. This paper also introduces a wrinkle to the classical theory of intertemporal consumer decision-making. The wrinkle is a new functional form for the consumer's discount function. The presentation in the paper tends to look like this: 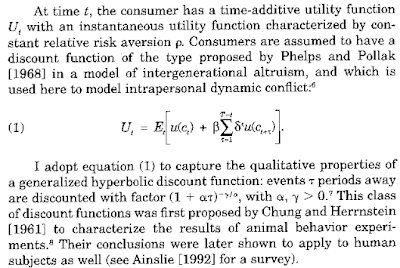 In fact, both of these papers are motivated by some of the same empirical phenomena. But they go about it in very different ways. Gul and Pesendorfer introduce an entirely new framework, while Laibson tweaks a functional form. In other words, Gul and Pesendorfer rewrite all of the rules for how decision-making is thought to operate, while Laibson sticks in something that works. As a result, it's natural for Gul and Pesendorfer to use a very formal framework, since formal things are more general and can build a foundation for many other theorists to work with. Laibson doesn't have any need to be so formal.

I imagine that some people complain about the formalism in Gul and Pesendorfer because it's hard for them to read. But after you learn to speak that language, it's actually easy to read - in many ways, easier than English. Formal math language forces you to read like a computer, which means you don't miss anything, while English tempts you (heh) to gloss over important parts as you scan through paragraphs.

In general, I think formal math style is no worse or better than informal engineering style. It's just a matter of personal preference.

Another thing that might annoy people about Gul and Pesendorfer's formalism is the clunkiness of doing economics this way. Do we really want to have to re-axiomatize all of consumer decision-making every time we see people doing something weird? Isn't the overhead of formalism a big waste of time and effort?

Well, maybe. If we take the Laibson paper seriously, all we have to do is to introduce a hyperbolic discounting function whenever we suspect it might make a difference in a model. That's equivalent to just setting the parameters of the hyperbolic discounting function to approximate a classic, non-hyperbolic discount function whenever we don't think it's interesting. But if we take the Gul and Pesendorfer paper seriously, we might have to reformulate all our theories. It's just not clear when the Axiom of Set Betweenness might apply. An axiom is just a lot more general than a parametrization. It seems to me that that's what you can lose from formalism - a clear sense of when the new stuff might make a difference.

But in the end, I bet that people use the Gul & Pesendorfer stuff in the exact same way they use the Laibson stuff - they apply it when they think it might make a difference, and forget about it at all other times. So formalism vs. informalism again just comes down to a matter of personal preference.
Author: Noah Smith Posted at 12:31 PM