Dregs of the Earth 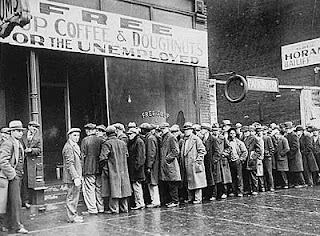 Someday, the robots will replace mankind. But have they already started to replace the less talented among us? Tyler Cowen thinks so. He hypothesizes that one main reason for our high unemployment rate is that many low-skilled people now have "zero marginal product" as workers - that they have become as useless to our economy as squirrels or pigeons:

Keep in mind, we have had a recovery in output, but not in employment. That means a smaller number of laborers are working, but we are producing as much as before...If I ran a business, fired ten people, and output didn't go down, might I start by asking whether those people produced anything useful?...

There is another striking fact about the recession, namely that unemployment is quite low for highly educated workers but about sixteen percent for the less educated workers with no high school degree...This is consistent with the zero marginal product hypothesis...

Before I say anything about this, I'll let two very experienced economists take the argument apart from a technical standpoint. First, Paul Krugman:

[I]f one factor of production has a zero marginal product, other factors must have very high marginal products, and hence be in great demand. So where are these factors? Is it capital? Then why so much overcapacity in almost every line of business? is it labor with particular skills, or in particular locations? As Mike Konczal points out, basically everyone’s unemployment rate has doubled, no matter their education level or location.

Let us talk about the marginal product of worker i in occupation j. In most cases, this is indeed zero. My marginal product would be zero in fishing, medicine, and many other fields. In a complex economy, if you were to randomly assign workers to jobs, ZMP would be the norm, not the exception. The more complex the economy, the more carefully workers must be assigned in order to avoid ZMP...

[Also,] when a manufacturer has excess inventory, production workers have effectively ZMP. But for the economy as a whole, that is consistent with an aggregate demand story [instead of Cowen's hypothesis]...

The upshot: many conditions in the economy can make it look as if workers are useless, when they really aren't. The mere fact that output has recovered while employment has lagged is not sufficient to conclude that some humans have become obsolete.

But I wonder whether Cowen is really interested in these alternate explanations. In his post, he himself comes up with an alternate story to explain his observations, and then summarily dismisses it. Read carefully:

Garett Jones suggests that many unemployed workers are potentially productive, but that businesses do not, at this moment, want to invest in future productive improvements. The workers only appear to have zero marginal product, because their marginal product lies in future returns not current returns. I see this hypothesis as part of the picture, although I am not sure it explains why current unemployment is so much higher among the unskilled. Is unskilled labor the fundamental capability-builder for the future? I'm not so sure.

So, Cowen starts with the assumption that unskilled labor is not a "capacity-builder for the future", and thus he concludes that...unskilled labor has become useless. This sounds a lot like assuming the conclusion, doesn't it?

Actually, this "zero marginal product hypothesis" is simply a more extreme version of an argument many economists make. The theory of "skill-biased technological change," for instance, holds that inequality is due to new technologies that complement the abilities of high-skilled (read: smart) people, but make the skills of the low-skilled (read: dumb) people unnecessary. In the field of education economics, stagnant college attendance in the face of an increasing college wage premium is often taken as evidence that the people not going to college are simply too dumb to do so (rather than, say, that spaces in colleges are in essentially fixed supply).

These theories all fit into a single basic paradigm: poor and unemployed people are poor or unemployed because of a lack of natural talent, ability, or character. Losers lose because winners are better. Economists who believe this look at the lower classes and see not room for vast improvements, but just a bunch of people doing the best they can, which happens to be not much. This ability-based worldview is so deep-rooted that Tyler Cowen can employ the aforementioned circular logic without even thinking twice.

I just can't buy it. The economy is far too complex to be described as the sum of individuals' actions; we are not simply 6 billion one-person companies each producing widgets in our backyard smelters. If workers' wages always equaled the amount they produced, then thousands of investment bankers would be earning negative wages for the economic destruction wreaked by the promulgation of mortgage-backed CDOs; the fact that those bankers earned billions of dollars then and similar billions of dollars now suggests that something is very wrong. It also suggests that many of the people now languishing in unemployment represent wasted potential - that their unemployment is due to a failure of big complex institutions and mechanisms rather than to their IQs.

The ZMP hypothesis is too close to a rejection of comparative advantage for my tastes. The term ZMP also suggests that the problem is the productivity of the unemployed when the actual problem is with the economy more generally (a version of the fundamental attribution error).

To see the latter point note that even within the categories of workers with the highest unemployment rates (say males without a high school degree) usually a large majority of these workers are employed. Within the same category are the unemployed so different from the employed? I don't think so.

Tabarrok For The Win.

From the Wikipedia article on the "fundamental attribution error":

As a simple example, if Alice saw Bob trip over a rock and fall, Alice might consider Bob to be clumsy or careless (dispositional). If Alice later tripped over the same rock herself, she would be more likely to blame the placement of the rock (situational).

Tabarrok is quite right. And I would go farther: the "fundamental attribution error" is at the core not just of Cowen's view of unemployment, but of the entire worldview of many "right-leaning" economists.
Author: Noah Smith Posted at 12:32 AM