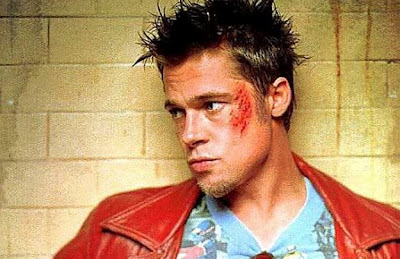 In 2001, Brad Barber and Terrance Odean published a very famous finance paper called "Boys Will Be Boys: Gender, Overconfidence, and Common Stock Investment". The upshot is this:

It has been known for quite some time that individual investors - this means you, sitting at your computer clicking away on e*Trade - almost all underperform the market. In other words, you suck at investing. In 1999, Odean found that a lot of this poor performance comes from the fact that individual investors trade too much. In other words, one reason you suck at investing is because you have an itchy trigger finger. And this 2001 Barber and Odean paper found that men have itchier trigger fingers than women.

Zero Hedge is a financial news website. The writers all write under the pseudonym of "Tyler Durden", Brad Pitt's character from Fight Club. Each post comes with a little black and white icon of Brad Pitt's head. On Zero Hedge you can read news, rumors, facts, figures, off-the-cuff analysis, and political screeds (usually anti-Obama, anti-government, and pro-hard money). On the sidebars, you can click on ads for online brokerages, gold collectibles, and The Economist.

The site is a big fat hoax. And if you read it for anything other than amusement, you're almost certainly a big fat sucker.

That's a bold claim! Why do I make this claim? Well, in one sense, all financial news is a hoax. Financial news, by definition, is public information - if you've read it, you can bet that thousands of other people have too. That means that if the market is anywhere close to being efficient, any information in any article you read will already have been incorporated into the price of financial assets. Reading or watching public information should not, in theory, give you any "alpha".

But OK fine, suppose the market is not efficient. Suppose there are some smart people who can interpret the public news really well, and some suckers who take home the wrong message. And also suppose that the suckers stupidly believe that they are the ones taking home the right message, and that the other folks are suckers. In that case, the smart people can make money by reading Zero Hedge, interpreting it correctly, and taking money from the suckers who either didn't read Zero Hedge or who took home the wrong message...right?

Wrong. Because there's another problem here. If the writers of Zero Hedge really knew some information that could allow them to beat the market, why in God's name would they tell it to you? If they had half a brain, they'd just keep the info to themselves, trade on it, and make a profit! Maybe then, after they had made their profit, they'd release the news to the public (and collect ad revenue), but by then the news would be worthless. Financial news sites, you should realize, are not in the business of giving you insider tips out of the goodness of their hearts.

So the only way you can make money by reading Zero Hedge is if you're not only smarter than a bunch of suckers who look and act a lot like you, but if you're smarter than Zero Hedge's writers too. Not gonna happen. The fact that financial news is big business fits perfectly with the mass suckering of America's individual investors documented by Barber & Odean (2001). Financial "news" is noise.

As you might expect, it's not hard to look back at Zero Hedge's predictions and see that a large number of them are junk. For example, here's a bunch of posts from 2009 predicting imminent hyperinflation. Hope you didn't make any trades based on that bit of wisdom! (Note for the sake of fairness: Yes, in terms of giving "hot tips", there are a lot worse sites than Zero Hedge...see Update 3 below.)

So how does Zero Hedge get away with this hoax? Barber & Odean (2001) give a big hint. Tyler Durden, whose name and image grace every Zero Hedge Post, is a symbol of masculinity. More specifically, he is a nerd's imagined vision of what a really masculine nerd would be like. In Fight Club, Durden says: "All the ways you wish you could be, that's me. I look like you wanna look, I f*** like you wanna f***, I am smart, capable, and most importantly, I am free in all the ways that you are not."

In other words, you are a young smart (i.e. nerdy) guy sitting at your computer with rivers of testosterone coursing through your veins. And now here comes Tyler Durden, your generation's Platonic ideal of pure masculinity, telling you that Real Men Take Risks. At the top of the site, there is a Tyler Durden quote: "On a long enough timeline the survival rate for everyone drops to zero." In other words, gamble. Bet that you're the smart guy and not the sucker. Because hey, you're going to die anyway, so there's no use hedging your bets. Zero hedge, right? (Or you can read a sister site called "Testosterone Pit".  Not kidding!)

In other words, "Tyler Durden" knows what Barber & Odean (2001) knew. Men take risks that, on average lose them money. Zero Hedge is a brilliant behavioral-finance technology that uses the predictable regularities of human psychology to extract money from testosterone-addled dupes. The people who run the site are far from idiots; they are geniuses. In fact, I wouldn't be surprised if "Tyler Durden" were actually a bunch of behavioral finance grad students, snickering behind their hands at everyone who takes their site seriously.

Now, dear reader, maybe you are a fan of Zero Hedge. Maybe you have been getting angrier and angrier as you read this post, and maybe even now you have a comment box open and are typing the first words of an angry diatribe: "You're an idiot and you teach at a shit school which does not acknowledge fact or logic which is keystone in finance and econ!!!" (an actual Tweet I received the other day from a self-described drunk undergrad.)

And maybe you're right. Maybe I am an idiot who is blinded to the obvious wisdom dispensed by Zero Hedge, wisdom that would make me rich if I was just smart enough to read the site and man enough to make some big bets. Maybe. But before you hit the "send" button on that comment, take a glance in the mirror. You're young, right? You're a man, right? You trade pretty frequently, right? And you're not a rich, successful hedge fund manager or investment bank trader, are you?

Here's a radical thought: Maybe you're the sucker.


Update: I showed this post to a few friends in the finance industry, and while all of them agreed, one came up with by far the best one-line response: "Retail investor is retail."

Update 2: John Aziz has a rebuttal over at Zero Hedge, in which he says: 1. The rise in the price of gold shows that hedging against hyperinflation has been a good bet, 2. The name "Zero Hedge" actually doesn't mean you shouldn't hedge, it means you should hedge against a total crash of the financial system, and 3. Zero Hedge has done a good job of exposing corruption in the financial system. I don't think I need to respond to point (1). Point (2) is interesting, I hadn't thought of that, but I'm not particularly convinced it's true. And Point (3) is true; good news is a good thing good to read, and journalism that exposes corruption is valuable. But reading news is different than trading on it, which is what I'm talking about in this post.

Update 3: Some people have pointed out that in terms of offering trading tips, there are a lot worse offenders than Zero Hedge. That's certainly true - The Motley Fool and StockTwits come to mind, not to mention Jim Cramer or any show on CNBC. Compared to those sites, Zero Hedge has a lot more news and less tips. I just picked on Zero Hedge because the testosterone thing gave me a perfect opportunity to whip out Barber & Odean. And also because it's become a haven for goldbug/"Austrian"/"hyperinflation-is-coming"/"the Fed is a UN conspiracy to destroy the white race" kind of BS.
Author: Noah Smith Posted at 6:00 PM