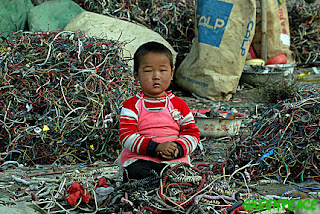 I'm a bit late to the party on Greg Mankiw's column about trade. But better late than never, right?
Mankiw's case for trade is the textbook one (and not just because Mankiw wrote the textbook): Trade is good because it is a voluntary exchange, and voluntary exchanges benefit the people who do them (or else they would not have chosen to carry out the exchange). Hence, trade liberalization is always good, Q.E.D.
There have been quite a lot of rebuttals to Mankiw's idea popping up over the blogosphere. So far, all the ones I have seen involve some version of the "winners and losers" idea. Briefly: Trade is always efficient, for the reason Mankiw gives. But trade creates inequality in trading countries, and it's often difficult for the "winners" from trade to compensate the "losers". In other words, though a country benefits overall from trade, some people in a country may be hurt. For good discussions of this argument, and related research, see Uwe Reinhardt, Ryan Avent, Mike Konczal, Ryan Avent again, and Angus of Kids Prefer Cheese.
All of these people seem to agree (and agree with Mankiw) on one basic point: The efficiency of trade is not in question. Only the distributional effects of trade are in question.
But to me, this seems highly non-obvious. Although I don't have an empirical analysis in front of me, I can think of at least a couple hypothetical reasons (and there must be more) why trade might not lead to an efficient outcome. No one seems to be talking much about these, so I suppose it falls to me.
The question is: Since trade is a voluntary exchange,why would a country choose to trade if it were harming itself by doing so?
Answer #1: Externalities. As Angus so pithily points out, "People, the United States is not a person!" Trades are undertaken not by countries, but by individuals within those countries. Negative externalities, as every Econ 101 student knows, happen when an exchange between two people causes harm to a third. In the case of trade, the third person who is harmed may be in one of the countries that is engaging in trade.
For example, suppose that I am a landowner in China. A nuclear power company in France, facing the high costs of safe nuclear waste disposal in France, wants to pay me to store all their waste on my land. I accept this trade, and stick the waste in a hole in the ground next to a river, which carries the radioactive waste downstream, poisoning tens of thousands of people. In this case, the trade did not result in an increase in efficiency, because of the size of the negative externality. If you think this example is unrealistic, read the news.
Now, there would have to be some pretty big externalities for protectionism to actually be better than free trade in the aggregate. But certain types of trade could easily lead to reductions in overall economic efficiency. Unless every country could be persuaded to tax or otherwise mitigate the externality, liberalizing these types of trade could be a mistake, regardless of distributional effects.
Answer #2: Dynamic Inconsistency. This is a concept most often used in behavioral economics; basically, people may later come to regret the decisions that they make today. "Me today" is not really the same person as "me tomorrow," and yet, because time goes only one way, "me tomorrow" has to live with the choices of "me today." Case in point: someone who chooses to use heroin today may come to regret that decision for the rest of his life, if he becomes an addict. Dynamic inconsistency is why people often resort to commitment devices to force themselves to do things that are in their own interest.
For most individual decisions, it seems unlikely that dynamic inconsistency outweighs the benefits of voluntary exchange. Addictive drugs are one of only a handful of plausible exceptions. But again, a country is not a person. A country's decision-making process may be far more prone to dynamic inconsistency than an individual's. This could throw a wrench into the "trade is always good" argument.
As an example, suppose China's central bank offers to lend Americans money very cheaply (as they do). This would seem to be a very good deal for the U.S. In the medium run, however (say, 10-20 years), the aggregate result of all our borrowing could be very bad for us (if it caused, say, a financial crisis), making us wish later that we hadn't borrowed all that money. The risk is greater for a country than for an individual, since aggregate risk exists in financial markets. This may explain why Jagdish Bhagwati, one of the leading crusaders for free trade, is not so sanguine about trade in financial assets. Notice, though, that stopping this one kind of dangerous trade - forbidding China to lend us money cheaply - would affect every single kind of trade we do with China, since it would cause an appreciation of China's currency. So this is not a small or limited case of trade being inefficient.

Notice that neither of these exceptions are arguments for autarky, or even for across-the-board trade restrictions. They are arguments that certain instances of trade liberalization may cause efficiency losses.
Mankiw does not address either of these theoretical possibilities. As far as he is concerned, the case for trade's efficiency is iron-clad in all cases. Somewhat surprisingly, the econ blogosphere seems to accept this argument, and focus exclusively on distributional issues. That in turn allows Mankiw to wave his hand and essentially say "Yes, but distributional issues are second-order; our first order of business should be to do what's efficient, and then later we can discuss how to distribute the gains from trade."
I am against giving this sort of free pass. The supposed consensus that trade is always efficient to me smacks a bit of golden-age-ism and false consensus. You hear again and again that trade (or, at least, the efficiency aspect) is the one issue that economists have settled. But if a consensus exists, it is a result of politics and opinion, not because economic theories make an iron-clad case for the efficiency of trade. Theoretical exceptions do exist, and to ignore this fact (as we do) probably just makes people less trustful of economists in general.


To be sure, there are exceptions to this rule...when other nations’ economic growth has side effects on the global environment, as it does when they emit the greenhouse gases that contribute to climate change, the United States has good reason for concern.

However, the externalities he's talking about are still externalities between countries, not between the people in a country. He's still insisting on treating each country like a single person, and that is what I see as his fundamental fallacy here.
Author: Noah Smith Posted at 7:26 PM