On Tuesday, Greg Mankiw linked to a two-month-old blog post by John Taylor of Stanford University. Taylor posts the following graph, which shows a striking inverse correlation between fixed investment (as a percentage of GDP) and unemployment: 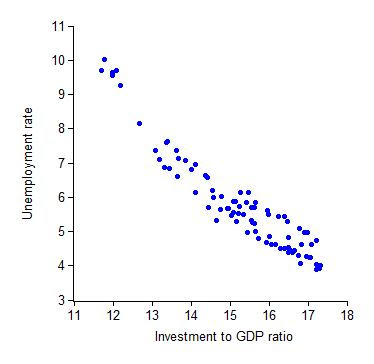 The obvious conclusion is that investment is very important for the business cycle. Should we be surprised? No! It's common knowledge that although investment and consumption are both correlated with GDP, investment is far more volatile - in other words, investment makes up a very outsized portion of business cycle swings. And in fact, this is exactly what theory would predict - since capital goods are durable, it's relatively easy to shift purchases of capital goods (i.e. investment) into the future or into the present.
(Paul Krugman points out that most of the recent collapse in fixed investment came from housing...sure, that's true, but nonresidential investment is also highly procyclical and highly volatile.)
So Taylor is pointing out something that everyone already knows. But here's the conclusion he draws:

Encouraging the creation and expansion of businesses should be the focus on government efforts to reduce unemployment. The recent compromise agreement to prevent the increase in tax rates on small businesses and the move to lighten up on the anti-business sentiment coming out of Washington are two steps in the right direction.

Sorry, but this just doesn't follow. Taylor seems to have in mind an RBC-type model, in which the business cycle is driven by supply shocks. But his graph in no way implies that we are living in a supply-driven world, because demand-based models also imply that investment and unemployment are inversely correlated!
This is a clear result of the standard New Keynesian macro models, for example (see Woodford 2005). In these models, investment is low when aggregate demand is low - if customers are buying even a little fewer of the goods that firms sell, it makes sense for firms to delay much of their purchases of the capital equipment that they use to produce their goods. The way for policymakers to boost investment, therefore, is to boost aggregate demand, by printing money and buying stuff - or, in some models, by having the government borrow and spend money. Thus, Taylor's graph is perfectly consistent with a world in which expansionary government policy is exactly what we need.  Paul Krugman also basically makes this point.
Anyway, thinking about investment in the context of New Keynesian models made me realize something. John Taylor is just drawing a Phillips curve! A Phillips curve is a curve that shows an inverse correlation between inflation and unemployment. And in New Keynesian models, inflation and investment go hand in hand - when the economy is booming, prices rise. So a New Keynesian would expect to see something just like what Taylor drew.
And then I remembered something else about Phillips curves - they shift over time. Policy shifts and structural shifts in the economy will, over time, change the tradeoff between inflation and unemployment. If you look at data over more than a decade, you see a series of different curves for different time periods: 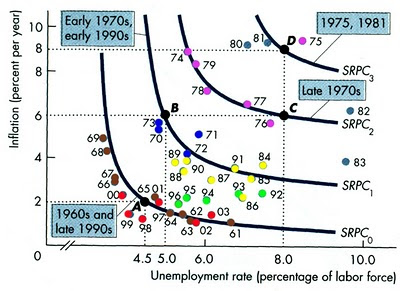 I then noticed that John Taylor's curve covers only 1990-2010. If Taylor's curve is in fact just a Phillips curve, then if we extended the time period we'd expect to see a series of several nested curves, with the 70s and 80s being farther to the upper right.
Which is, in fact, exactly what we see! Justin Wolfers does the leg work and comes up with this: 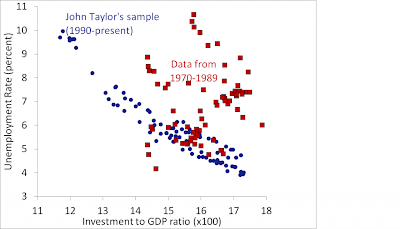 Looks familiar, right? Somehow I'm guessing Taylor probably didn't set out to redraw the Phillips curve...but that's what he's done.
To reiterate, Taylor's graph is perfectly consistent with a world in which demand shocks drive the business cycle and demand-side policy is the key to stabilizing investment. His supply-side conclusions are purely a function of his assumption that we live in an RBC-type world. But there are good reasons to think he's wrong. For an argument as to why New Keynesian models are better than RBC models, see this 1989 paper by...Greg Mankiw.

Update: The data support the demand story. Not exactly a huge surprise...