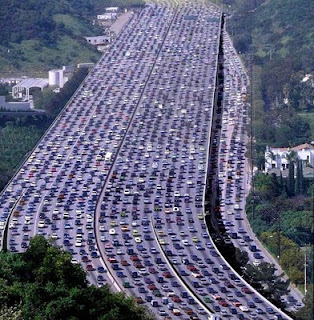 Via Paul Krugman, I come across this George Will column purporting to expose the "real" reason why many liberals support rail transport:

So why is America’s “win the future” administration so fixated on railroads...? Because progressivism’s aim is the modification of (other people’s) behavior...

Forever seeking Archimedean levers for prying the world in directions they prefer, progressives say they embrace high-speed rail for many reasons—to improve the climate, increase competitiveness, enhance national security, reduce congestion, and rationalize land use. The length of the list of reasons, and the flimsiness of each, points to this conclusion: the real reason for progressives’ passion for trains is their goal of diminishing Americans’ individualism in order to make them more amenable to collectivism.

To progressives, the best thing about railroads is that people riding them are not in automobiles, which are subversive of the deference on which progressivism depends. Automobiles go hither and yon, wherever and whenever the driver desires, without timetables. Automobiles encourage people to think they—unsupervised, untutored, and unscripted—are masters of their fates. The automobile encourages people in delusions of adequacy, which make them resistant to government by experts who know what choices people should make.

Time was, the progressive cry was “Workers of the world unite!” or “Power to the people!” Now it is less resonant: “All aboard!”

This is not a claim you often hear spoken aloud, but it seems to be part of conservatives' tacit understanding of the world. Three questions suggest themselves. In decreasing order of deference to the conservative worldview, these are: 1. Do trains reduce individual liberty? 2. Do progressives support rail for this reason? 3. Why do conservatives hate trains so much?
Do trains reduce freedom of movement? Not if you live in a city, they don't! If you try driving your car in a big city, you'll find yourself doing a lot of A) driving around looking for parking, as well as B) walking to and from your parking spot. If you have to use street parking, you'll find yourself temporally constrained as well, constantly checking your watch to see if there's still time on the meter. And that's all before taking traffic into account.
Contrast this with trains. I lived for over two years in a country with one of the world's best rail systems (Japan), and I relished the freedom that it gave me -any time I liked, I could walk to a train station, wait no more than a few minutes for a train to arrive, and be sure that I'd reach my destination in a set amount of time. Not only this, but any time I liked I could hop on a bullet train to another city and travel around that city in exactly the same manner.
Now, if you live in the suburbs or the country, you need a car (or some equivalent). No government infrastructure program will ever be able to change that. But in the places where trains are feasible - and in the places where progressives want to build them - rail increases personal freedom of movement.
What about Will's contention that progressives want trains in order to reduce individual freedom? Rather unlikely. The fact is, government-subsidized rail mainly benefits the poor (since there are big overhead costs to owning a car). It also mainly benefits urban residents. Progressives, for the most part, are urban residents who are concerned with providing government services to the poor. Why should they need additional, sinister, hidden reasons to support something that's so obviously in their interest?
Finally, two can play at Will's game. I could easily claim that conservatives hate trains not because of a love of freedom, but because of racism. Cars are the main enabler of white flight; without trains and walkable streets, white suburbanites need never see a black person from close up. Conservatives, I could argue, are throwing a thin and shoddy veneer of libertarianism over the thick, unshakable bedrock of racial nationalism that is the true heart of their movement. Trains threaten their comfortable status quo of voluntary apartheid.
Do I claim this? Well, I think it is a part of what's going on. A bigger part, I'm sure, than hate for freedom plays in progressives' support for trains. But at the end of the day, I think that most of conservative opposition to rail is just plain old economics - trains tax the rich to benefit the poor. It's one more reflection of the sad fact that too many of America's policy debates these days are about how to divide the shrinking pie, and not about how to grow that pie.
As for George Will, I think it's sad that the Rush Limbaughs and Glenn Becks have made it impossible for a thoughtful conservative to get noticed. Will has pretty clearly been forced to appear ever more reactionary, and to say ever sillier things, in a doomed attempt to shore up his declining relevance to the conservative movement.

Update: As a commenter notes, I had been forgotten to add that the conservative movement is heavily bankrolled by the petroleum industry, which is opposed to train use for obvious reasons. This is another central reason for conservative anti-train animus.

Update 2: Paul Krugman is of a like mind on this subject.

Update 3: If you think trains are a thing of the past, you're betting against Warren Buffet.


if progressives hate cars because they don't like people to have so much freedom, then why do progressives love bikes so much. You can take a bike nearly anywhere a car can go...and so many more places as well. Plus any bike problem can easily be fixed by an individual with basic tools, while many car problems require highly trained individuals with expensive machinery. When it comes to independence, a bike is far more liberating.

In a word: Yes. So why do conservatives hate bikes? Is it because bikes are cheap, and bike transport therefore creates fewer rich/poor divisions? Or is it because bikes don't give you a bubble with which to keep out undesirable people?

Update 5: Looks like George Will was all for high-speed rail a few years back. Left hand, meet right.

Update 6: Someone makes the eminently sensible point that trains make drivers more free, since they reduce traffic. How did I miss such an obvious point? But it hardly matters, as George Will's thesis has by now been beaten to a bloody death from every angle imaginable.
Author: Noah Smith Posted at 4:24 PM