Idea of the day: National universities

I'm a little late in getting to it, but Matt Yglesias has a great post about America's human capital stagnation:

[T]hroughout our history, America has traditionally been the best educated country in the world. That goes all the way back to New England’s settlement by Bible-obsessed Puritans who through up schools everywhere so kids could learn to read the word of God. It continues through Justin Smith Morrill’s Land Grant Colleges Act, through an emphasis on being an attractive destination for high-skill workers, through to the GI Bill, and public school desegregation in the twenty years after 1955. But we’ve really slowed down. Our fancy colleges are getting more expensive rather than getting bigger or better. The downscale for-profit college sector is dynamic and innovative, but it’s basically a scam where barely anyone graduates. We’re not investing in high-quality preschool, we’re shutting the door on skilled migrants, and we’re not investing in effective job training programs. (Emphasis mine)

Yglesias is, of course, completely right. In fact, human capital stagnation seems to me a much likelier culprit for a "Great Stagnation" than the dubious hypothesis of a slowdown in technological innovation. People can't spend their whole life in school, so education really is "low-hanging fruit".
But that doesn't mean there isn't fruit left to be picked! Check out this graph of U.S. college enrollment rates:

There is some improvement here, but as you can see, just over a third of Americans of college age is actually enrolled in college. Furthermore, as Matt points out, a lot of that increase is in crappy for-profit colleges from which few people actually graduate, and which teach skills of dubious value. There is plenty of room to increase enrollment. In fact, since high school dropout rates have fallen to 10%, and since postgraduate education really isn't for everyone, increasing college enrollment (and completion!) might be our best bet for increasing our human capital.
Now note the phrase I highlighted in Matt's post above. State and private four-year universities - the real generators of top human capital - have been getting more expensive at an astronomical rate:

While college enrollment rates are up a little over 50% since 1980, the price of college is up by over 1000%.
What this points to is a supply shortage. As any Econ 101 student could (hopefully) tell you, when you have rapidly increasing price and slowly increasing quantity exchanged, it's indicative of a situation of a positive demand shock under inelastic supply: 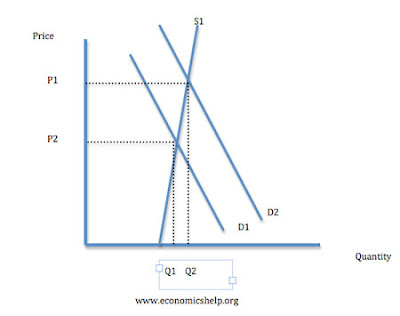 More people want to go to college (probably because of the higher college wage premium), but the supply of high-quality colleges simply isn't that big. People are flocking to for-profit colleges because there just isn't room at public ones. And since there are good theoretical as well as empirical reasons to believe that for-profit universities just can't deliver the goods, the key fact of U.S. higher education would seem to be the stagnant number of spots at good universities. As Yglesias says, colleges are getting more expensive, but not bigger.
Which brings me to my idea of the day: A federally funded National University System.
When you have a supply shortage, one solution is to shift the supply curve to the right. Sometimes this is impossible. But in the case of U.S. public universities, it is very doable! Plenty of other countries have national university systems, and these national universities are often very high-quality. Why not us? Why don't we build a system of high-quality, federally funded national universities to co-exist alongside our already excellent state universities?


It's not as if we don't have the resources to do this. Land is not an issue. And academic jobs are in notoriously short supply, meaning that there is a huge pool of qualified PhD's ready to teach and do research. We bring the best and the brightest to get PhD's here, and then a bunch of them end up returning to India, China, or Korea...why not keep more of them here as professors?
As for Constitutional objections, note that we already have a number of federally funded universities.Ever hear of West Point?
Now, people who are opposed to this will say: Isn't this a risky undertaking? Suppose you build the national universities and you can't find enough high-quality students to fill them? In other words, what if demand for college enrollment has gone up in the U.S., but demand for high-quality college degrees hasn't, because we just don't have any more smart kids?
I highly doubt that this will prove be the case, since graduation rates have stayed constant or increased as enrollment has gone up. But even if we run out of smart kids, we have an easy backup plan to fill the national universities: overseas students. The world is a vast and infinite pool of smart kids waiting to be tapped. Now it's true that if we have to go shopping for smart kids overseas, the National University System won't do as much to reduce nationwide tuition costs (because that'll push up demand to match the increase in supply). But at least we'd wind up with a ton of imported human capital (assuming we let the overseas undergrads immigrate after graduating)!


And the spillover benefits from more top-quality research universities are potentially enormous. The U.S. depends on innovation and research for its prosperity, and yet federal spending on research and development has fallen by two-thirds since 1960, leaving private companies to pick up the slack. There are plenty of research activities that universities do that private firms can't, especially basic research. If the U.S. is to remain the world's technological leader, a National University System would seem to be a good move.
To sum up: a National University System would boost human capital, would boost research and development, and would probably reduce tuition costs. The U.S. has the world's best universities, and we should capitalize on this advantage. Until a rigorous cost-benefit analysis is performed, of course, I can't say with certainty that the benefits would justify the expense of building the universities. But it is an idea worth thinking about, and I don't really see anyone suggesting it. So here, I've suggested it.


Update: Niklas Blanchard at Modeled Behavior basically agrees. But there is one point of mine that I think he doesn't quite get. He asks: "But why would there be a supply shortage at such high tuition rates?" His answer is that universities require such huge initial investments, and take so long to pay off, that building them is not feasible for the private sector. I think that although this is true, the main reason for the supply shortage is that schools don't "pay off" in the traditional sense, ever. Colleges just seem to only work well as nonprofits. And the only people who are willing to invest huge amounts of money in nonprofits are the government and rich private individuals (e.g. Leland Stanford). We have a supply shortage because governments make the decision whether or not to build new public-school campuses (and recently they have not done so), while colleges themselves can only respond to skyrocketing demand by raising price.


[T]he shortage isn’t so much of “universities” as it is of prestige. You could hire some people with PhDs and throw a few classrooms together pretty easily, but it would be extremely difficult to replicate the decades of history associated with America’s selective colleges and universities.

This is the old "signalling" model of education, which holds that college doesn't really give you useful skills, it only serves to prove to potential employers that you are smart and/or hardworking. In this model, a school's prestige is valuable because it sends a better signal.  I won't rehash the signalling debate here. But I would like to ask Matt: If you think that college is all about prestige and not about human capital, why did you equate human capital with years of schooling in the first place? Given that 95% of the populace graduates from high school, you pretty much have to think either that A) college gives you human capital, or that B) human capital shouldn't be measured in years of schooling. Pick one!

1) Even in Leland Stanford's day this was extremely rare. Stanford University is actually one of the youngest of America's elite schools, and probably only came into being because there were no elite schools in California in the late 1800s; in fact, Leland Sr. initially contemplated making Stanford an arm of Harvard!

2) Although I think Niklas is right about the globalization of charity, it seems to me that private universities have never been that huge a factor in terms of numbers in the U.S. Schools like Harvard and Stanford grab headlines, but have small fractions of the enrollment levels of Berkeley or the University of Michigan.

3) Niklas doesn't mention Baumol's Cost Disease by name (though he uses Baumol's favorite example of classical music!), but I think that's what he's getting at. Starting a top university is just a more expensive undertaking than it used to be...and it was always insanely expensive. But also keep in mind that large amounts of the funding for top public universities comes from charity (private alum donations).


4) Remember that universities don't just create human capital, they do research too! And research is as pure of a public good as exists anywhere. So government subsidies for research institutions are likely to get a lot of bang for their buck.
Author: Noah Smith Posted at 2:09 PM