The tax debate has never been about the evidence

Matt Yglesias sees the American right retreating from intellectual/empirical attacks on progressive taxation, and falling back on moral attacks:

You can tell something’s happening in the economic policy debate when you start reading more things like AEI’s Arthur Brooks explaining that it would simply be unfair to raise taxes on the rich. Harvard economics professor and former Council of Economics Advisor chairman Greg Mankiw has said the same thing...[W]e used to have a debate in which the left said redistributive taxation might be a good idea and then the right replied that it might sound good, but actually the consequences would be bad. Lower taxes on the rich would lead to more growth and faster increase in incomes.

Now that idea seems to be so unsupportable that the talking point is switched. It’s not that higher taxes on our Galtian Overlords would backfire and make us worse off. It’s just that it would be immoral of us to ask them to pay more taxes[.]

Paul Krugman attributes this to the closing of the conservative intellectual worldview:

[M]y take is that what we’re looking at is the closing of the conservative intellectual universe, the creation of an echo chamber in which rightists talk only to each other, and in which even the pretense of caring about ordinary people is disappearing. I mean, we’ve been living for some time in an environment in which...Chicago professors making several hundred thousand a year whine that they can’t afford any more taxes, and are surprised when that rubs some people the wrong way. Why wouldn’t such people find it completely natural to think that the hurt feelings of the rich are the main consideration in economic policy?

While I think neither Yglesias nor Krugman is incorrect, I do think there are a couple of important factors that they don't mention in their posts.
The first of these is a selection effect. Specifically, after decades of conservative economic policies, the only people left arguing for even more conservative policies tend to be either blinkered ideologues or vested interests. Back in the 70's taxes on the rich were high, but now they're quite low. There's no room to cut them any more without forcing the American government into default (and, in fact, the Bush tax cuts will probably do this if not repealed). Any economic benefit that we might ever have gleaned from trickle-down economics had to have been tapped out way back in the 80s.
So who is still arguing that taxes on the rich are oppressively high? Well, rich people who don't mind if the country is forced into default, for one. And also people who, because of their personal morals, just really, really, really don't like progressive taxation. The winnowing of the conservative raison d'etre is going to produce the kind of "echo chamber" that Krugman sees, as well as the increasing moralization cited by Yglesias. Conservatives won the policy debate, back when Matt Yglesias and I were in diapers. What we call the "conservative intellectual movement" in 2011 is a handful of corrupt, silly, or monomaniacal people trying (somewhat lamely) to replicate the victory their forebears won in the 80s.
But actually, I think there is something even bigger that Yglesias and Krugman don't mention. Specifically, the debate about taxation may have been an intellectual one at the elite level, but on the level that really matters - mass opinion - it has always been about morals and emotions, and never about elasticities or deadweight losses. The idea that progressive taxation "punishes success" is something my dad was hearing back in the early 80s; my history teacher gave me that line back in '97, and I suspect it was a common refrain a century earlier than that. The "fairness" argument is not new. And on an even broader level, it was stereotypes of "welfare queens" and lazy minorities that turned working-class whites against social insurance (and against government programs in general) in the Reagan years.
It was these emotional and tribal appeals that shifted much of America to the Republican camp. The average working- or middle-class Republican voter doesn't have a clue who Greg Mankiw is, what determines economic growth rates, or how trickle-down economic policies are supposed to work. But, in whole or in part, he has bought into a narrative that tells him that he does a hard, honest day's work, and that taxes and government spending are nothing more than a way of punishing him for that hard day's work (and, probably, rewarding some black or Hispanic person for a life of indolence). 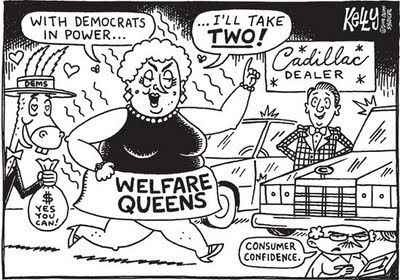 That is why we are still having a debate over progressive taxation at all. The rump movement that is still trying to make an intellectual case for tax cuts at the elite level maintains their outsized clout and elevated profile only because of the success of the populist narrative that keeps the Red States red. Until we change that populist narrative, we can smack down Arthur Brooks and laugh at Greg Mankiw all we like, but we're not going to save our nation-state from fiscal ruin. I'm sorry if that sounds overly pessimistic.