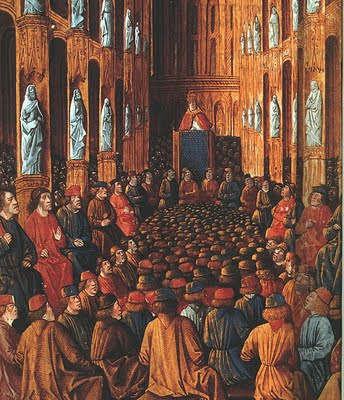 In honor of the death of bin Laden, I think I'll take a break from economics and do some random, off-the-cuff historical musing.
I've always been struck by the parallels between the Christian Crusades and the modern-day "jihads" roiling the Islamic world. Back in 1000 AD, "Christendom" was a backwater. It was a poverty-stricken civilization, nostalgic for its vanished glories. It was also a violent place, ruled by local strongmen, suffering from explosive fertility rates, with no real separation of church and state. In other words, it was experiencing more severe versions of the problems facing many Islamic countries in recent decades.
Into this volatile mix emerged a religious leader (Pope Urban II) who declared a holy war on a richer, more cosmopolitan infidel civilization. Ancient European glory would be recaptured with a wave of pure religious zeal. Generations of starry-eyed French, German, British, and Italian youth flung themselves against the lands of Islam in a ravening horde; sheer ferocity and the element of surprise gave them a few initial victories, which they celebrated with savage brutality. But eventually the superior technology and organization of the Islamic nations slapped the Crusaders down like the annoyance they were. In the end, the Crusaders ended up doing the most harm, not to Islam, but to a rival sect of Christianity, when they sacked Orthodox Constantinople in 1204.
A very similar thing is happening with today's jihads - although al-Qaeda (the modern-day Knights Templar?) had a few spectacular initial successes, and have slaughtered a great number of their co-religionists, they've never really done any serious damage to the West. Yes, that could change if al-Qaeda gets nukes. But right now, in the wake of the ignominious death of Osama bin Laden, it's looking like the jihads have failed.
So why is this important? Well, according to my personal reading of history, the Crusades were a big turning point in European civilization. They demonstrated that religious zeal and high birth rates were not sufficient to win wars. And, more crucially, they showed that theocracy is a poor foundation upon which to build civilizational greatness. After the Crusades, Europe started moving toward the separation of church and state, and never stopped. The results, in retrospect, seem pretty darn positive.
I hope, therefore, that the failure of Osama bin Laden's program for restoration of Muslim glory will provoke a similar rethink. Al-Qaeda's jihad, like the Crusades, has turned out to be both nihilistic and weak. This will hopefully convince Muslim countries from Saudi Arabia to Pakistan to Iran that "rendering unto Caesar" represents best practice. In fact, the Muslim world seems much better positioned today to make that transition than Christendom was a thousand years ago - countries like Indonesia, Turkey, and (to some degree) Egypt have already separated church and state.
In other words, I'm optimistic regarding the Islamic world. It took Europe five centuries to throw off the yoke of theocracy after the Crusades crashed and burned, but don't be surprised if it takes the Middle East and other Muslim lands only a few decades. In fact, I predict that well before the end of this century, the term "Islamic world" will be as obsolete as "Christendom." And make no mistake, that will be a very good thing for those countries. If you want your nation to be rich, stable, and powerful, separation of church and state is clearly the only way to go.