It also seems to me that the long run comes more quickly when TFP is relatively high, which again brings us back, at least partially, to the supply side.  This view is supported by theory.  When the economy has a lot of broad-based technological innovation, at least somewhat evenly distributed, job creation is easier, income effects are more likely to positively cumulate, and monetary and fiscal policy are more likely to gain traction.

The post to which he links regards the depression of the 1870s, and says this:

1873-79 was quite turbulent, but afterwards the global economy adjusted to deflation.

First, I would like to point out that 1873-1879 is six years. That doesn't sound "quick" to me! Recall that that particular depression is typically called the "Long Depression". This despite the high TFP growth at the time.
And six years is twice the amount of time from the 2008 financial crisis until now. If a six-year depression is "quick," why should we conclude, after three years, that our current depression is being prolonged by supply-side factors? That does not make sense to me.
Also, there are other obvious counterexamples. The recessions of the early 1980s were very short and "V-shaped," despite the extremely low rate of TFP growth at the time: 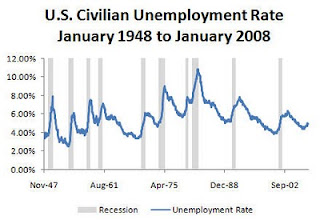 By contrast, the early-2000s recession, though shallow, was much longer and "U-shaped", despite the recovery in TFP growth.
Therefore, it seems to me that the historical record does not show an inverse relationship between TFP growth and recession duration. That doesn't mean a relationship isn't there, but it would require serious and careful econometrics to tease out. I know of no study that has done that yet.
If supply-side factors are prolonging our current malaise, this does not appear to be the channel through which they are working.
Author: Noah Smith Posted at 3:04 PM