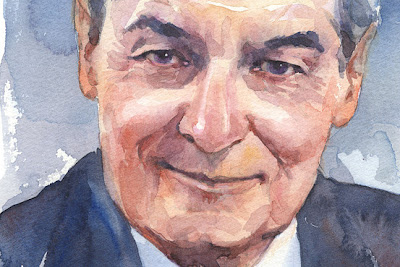 Someday I intend to write a book about the history of modern macroeconomics. I plan on having Bob Lucas be a pivotal figure in this book, so I'm always interested what he has to say, even though he is now pretty old. Here's an interview Lucas gave recently for the Wall Street Journal. Here's a few excerpts:


One [thing on Lucas' mind] is the failure of the European and Japanese economies, after their brisk growth in the early postwar years, to catch up with the U.S. in per capita gross domestic product. The GDP gap, which once seemed destined to close, mysteriously stopped narrowing after about 1970...

For the best explanation of what happened in Europe and Japan, he points to research by fellow Nobelist Ed Prescott. In Europe, governments typically commandeer 50% of GDP. The burden to pay for all this largess falls on workers in the form of high marginal tax rates..."The welfare state is so expensive, it just breaks the link between work effort and what you get out of it, your living standard," says Mr. Lucas. "And it's really hurting them."

Now, like I said, Lucas' age really does excuse him in a lot of cases. But doesn't he know that Japan has lower taxes (and more work hours) than the U.S., not less? That supports the idea that high taxes make people work less, but it definitely contradicts the hypothesis that taxes are behind the GDP gap.
It's always struck me as kind of amazing how many economic phenomena Lucas and Prescott and others of their generation ascribe to marginal tax rates, even when it obviously makes no sense to do so.I guess it just goes to show how deep an imprint the high tax rates of the postwar period made on the minds of the economists who brought down that tax regime in the 70s and 80s.
Anyway, more Lucas:

Turning to the U.S., he says, "A healthy economy that falls into recession has higher than average growth for a while and gets back to the old trend line. We haven't done that. I have plenty of suspicions but little evidence. I think people are concerned about high tax rates, about trying to stick business corporations with the failure of ObamaCare, which is going to emerge, the fact that it's not going to add up. But none of this has happened yet. You can't look at evidence. The taxes haven't really been raised yet."

Lucas is being intellectually honest here. The line that Obama is keeping the economy from recovering by being a scary socialist has by now become a standard conservative argument, from the most disreputable hacks on CNBC all the way up to the lofty ranks of the Nobel-wielding demigods. But Lucas admits what few others will say, which is that this line is a guess and a hunch and a supposition, not the result of any economic theory or empirical work. Obama's attitude, even more than his policies, just feel wrong to conservatives, and they feel like this must be what is causing macroeconomists' models to break.
Here's Lucas on Rational Expectations:

"If you're going to write down a mathematical model, you have to address that issue. Where are you supposed to get these expectations? If you just make them up, then you can get any result you want."

This is true. But my problem with Rational Expectations is kind of the flip side of this statement; if you don't care about what result you get, you can make up anything you want!
Do people have rational expectations? Sometimes they do. And sometimes they don't. I recently did an experiment in which people invested in a little toy financial market. Even the people who demonstrated that they understood the asset's value perfectly well also reported that they didn't believe that the market price would converge to that value. When there was a price bubble, even the savviest traders didn't predict a crash, and they were taken completely by surprise when the crash came. That kind of outcome just doesn't gel with Rational Expectations.
The moral of the story is that you can't derive people's expectation process just from deductive logic. You have to go see how people really behave.
Lucas on "foxhole Keynesianism":

Mr. Lucas believes Ben Bernanke acted properly to prop up the system. He doesn't even find fault with Mr. Obama's first stimulus plan. "If you think Bernanke did a great job tossing out a trillion dollars, why is it a bad idea for the executive to toss out a trillion dollars? It's not an inappropriate thing in a recession to push money out there and trying to keep spending from falling too much, and we did that."

It's interesting that this position would be contradicted by Lucas' own preferred macro models. I guess this just goes to show how deep the intuitive sympathy for Keynesian ideas runs, even among the titans of neoclassical macro.
At any rate, although I disagree with a lot of what Lucas says, I've got to hand it to him: even at his age, he shows a decent amount of nuance and skepticism. That's great to see.

Update: However, As Brad DeLong points out, Lucas' position on stimulus is not exactly clear and consistent over time...

Update 2: Paul Krugman has a great summary of where Lucas fits into the history of modern macro. Now doesn't that story deserve a whole book? ;-)
Author: Noah Smith Posted at 10:37 PM