Tinkering at the margins 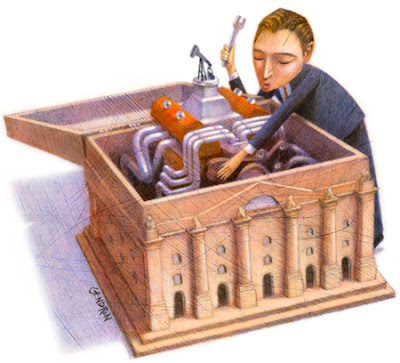 Still swamped with work, but time for a quick post to reward myself for getting my dissertation proposal approved...

Harvard profs Greg Mankiw and Robert Barro, two giants of the macro world, have twin editorials in the NYT suggesting what we should do to improve the economy. Mankiw favors free trade agreements and steps to improve international wage competitiveness...

Myriad government actions influence the expected future profitability of capital. These include not only policies concerning taxation but also those concerning trade and regulation.

For example, passing the free trade agreement with South Korea, which has languished in Congress more than four years after first being negotiated, would be a step in the right direction. So would reining in the National Labor Relations Board; its decision to block Boeing from opening a nonunion plant in South Carolina may have been hailed by organized labor, but it surely did not hearten investors.

...while Barro suggests switching from corporate and estate tax to a VAT:

A broad-based expenditure tax, like a VAT, amounts to a tax on consumption. If the base rate were 10 percent, the revenue would be roughly 5 percent of G.D.P. One benefit from a VAT is that it is more efficient than an income tax — and in particular the current American income tax system...

Abolishing the corporate income tax is similarly controversial. Any tax on capital income distorts decisions on saving and investment.

Now, I broadly agree with all the policies described above (yes, including allowing South Carolina to compete with Washington state on wages). But do prof.'s Mankiw & Barro really believe that these will get us our of our slump? Where have we seen an example of a country that got itself out of recession by tweaking its tax and labor policies? I can't think of one. Europe has a VAT and a corporate tax rate that is 15 percentage points lower than ours, and they don't seem to have made a quick exit from this slump. Maybe FTAs will have more of a countercyclical effect, but it's important to remember that Korea is one-seventh our size.
And another point. All of these policy suggestions are structural things. They are one-off policies that cannot be repeated. Even if improving tax policy helps us out of this recession, what do we do when the next recession comes along? Now, maybe Mankiw and Barro don't believe that real countercyclical policy exists, and that instead the best we can hope for is that crises will make needed structural changes politically feasible. But then I think they should say this. (Update: Brad DeLong agrees.)
As for me, I doubt that these tweaks will have much of an effect. What do I think will? Well, my hunch - and this is just a hunch - is that we should start taking a very hard look at exchange-rate policy...but that is a blog post for another day...
(Note: Barro also makes an argument for fiscal austerity. I'm not going to get into that now, except to say that the approval I expressed toward his tax policy ideas do not extend to his call for austerity. Just in case anyone was wondering.)
Author: Noah Smith Posted at 3:30 PM