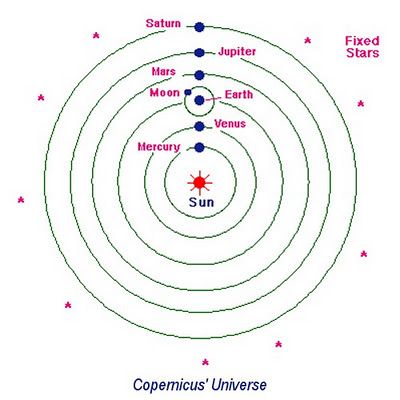 More philosophy-of-science blogging...
It's not often that I take strong exception to a Matt Yglesias point, but today is one of those days. Discussing John Kay's epic rant against modern macro, Matt compares the Rational Expectations Revolution to the Copernican Revolution in astronomy:


The basic impulse to say that the theory has to make sense and be grounded in a compelling account of how the world works makes major contributions here. It’s why Copernicus ditching geo-centrism for heliocentrism, and it’s how Newton develops the theory of gravity. But the instinct to say that no, the important thing is for the theory to produce actual results is also important. If we’d stuck with Copernicus’s “theoretically compelling” idea about perfect circles, we’d never have noticed that this was actually a totally arbitrary modeling assumption with no basis whatsoever...What’s more, while in retrospect we see Copernicus as the ancestor of our modern way of thinking, the fact of the matter is that if you were trying to launch a rocket ship somewhere in the early 16th Century you’d be much better off chugging along with the epicycles rather than siding with the guy who knew that the earth orbited the sun.

My view, with both all due respect and all due derision, is that the Robert Lucas types are like the early Copernicans here. There’s something admirable in their insistence that it ought to all work out to an easily modeled system grounded in compelling theoretically considerations. The New Keynesian model is a mess, like late-Ptolemaic astronomy, thrown together to account for observed reality. But you don’t fly to a moon with an elegant model that delivers mistaken predictions about where the moon’s going to be. And what we actually need is a Kepler to give us an elegant model that actually predicts the phenomena, and then a Newton who can explain what that model means.

While I agree with Matt's take on how good science works (alternating steps of theoretical deduction and experimental induction), and with his take on the Copernican Revolution, I think he's being way too generous with the analogy to Rational Expectations. For two reasons:
1. Unlike heliocentrism, we don't know yet that Rational Expectations is right. It is certainly not the case that Rational Expectations is the only "easily modeled system grounded in compelling theoretical considerations." There are plenty of alternatives! The obvious candidate here is a model where people learn over time. If you don't think that's a compelling alternative, just ask recent Nobel winner Thomas Sargent; even though he helped invent Rational Expectations, when found that the RE models didn't fit the data, he started working on learning-based models instead. So until the data give us a good idea of which overarching theoretical framework (if any) describes the world, we should treat RE as only one candidate among many. It may not even turn out to have been a good guess.
2. The Rational Expectations people didn't just insist that macroeconomists use self-consistent, perfectly microfounded Theories of Everything. In fact, they didn't stop at insisting that people use Rational Expectations! They went so far as to insist that theories of business cycles should be driven by so-called "real shocks" - changes in technology, changes in government policy, or changes in people's willingness to work. These were at the heart of Ed Prescott's "Real Business Cycle" theory, which became the heart of the "freshwater" school of macro. Although New Keynesian models also use the Rational Expectations framework, freshwater types went out of their way to denigrate these demand-based models. The current insistence by political conservatives that our economic malaise is due to workers' laziness, or "policy uncertainty," or uncontrollable changes in technological progress, is given intellectual heft by the freshwater school's insistence that these are the only things that should matter. It's kind of like if Copernicans had called Kepler a "bad guy" for daring to suggest elliptical heliocentric orbits instead of circular ones.
I try not to be too hard on the Rational Expectations Revolution. It was motivated not only by theoretical elegance or ideology, but by observation of the real world - specifically, the failure of stimulative monetary policy in the 1970s. And it may well have erased a false sense of certainty among econometricians that was leading to policy mistakes (I plan to write a post about this soon). That is all to the good. But the revolution has not yet led to a theory of business cycles that fits the data well. And it very well may never do so - especially, I predict, if its adherents keep insisting on including only "real shocks" in their models. Until RE gives us something constructive, I think that comparisons with Copernicus are premature.