Why conservatives can't get people to work hard 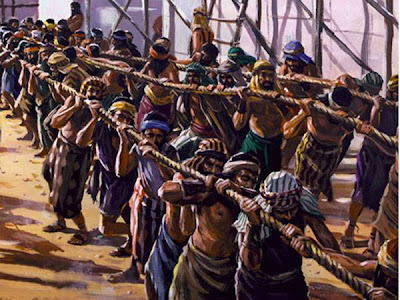 "A city is made of brick, Pharoah. The strong make many. The weak make few. The dead make none." - Moses
I'm a bit late to the party here, but I thought I'd offer some comments on Tyler Cowen's recent New York Times column about discipline and hard work. First, some excerpts:

[A]s someone from a conservative and libertarian background, I find that I am hearing too much talk about riches and not enough about values...

Conservatives often believe that much of the poverty in the United States is an issue of insufficient discipline and conscientiousness...Yet how can such a culture of discipline be spread? [I]t has been argued that society should grant respect to business creators and to stern parents who instill discipline...

But are such moves, when carried out, actually shifting popular culture in a properly disciplined and conscientious direction? Not really. In fact, in the United States, the red states, where conservatives are more powerful, tend to have higher divorce rates and weaker educational systems than do blue states...

The counterintuitive tragedy is this: modern conservative thought is relying increasingly on social engineering through economic policy, by hoping that a weaker social welfare state will somehow promote individual responsibility. Maybe it won’t. (emphasis mine)

I think this is extremely insightful, and I am delighted to hear people beginning to say this.

See, this is one of the big problems I have with conservatism as an ideology: Conservatives really want people to value hard work and discipline (not to mention sexual abstinence), but they typically have no idea whatsoever how to get people to actually value these things! Like the military dad in American Beauty, they think that they can just beat their values into the populace...except instead of fists and feet, the cudgel they try to use is poverty. Without a welfare state, the thinking goes, people who slack off and party and have sex will be forced to live with the consequences of their actions; having been stung by the lash of economic hardship, they will see the light, toughen up, and go get a real job.

Sounds like tough love. No wonder people call the Republicans the "daddy party"! But unfortunately, this just doesn't work on most people. There are at least four big reasons I can think of, off the top of my head.

For another thing, being poor in America, or any rich country, is just not that bad. Even if you work at McDonald's, you can probably afford plenty of junk food, a heated room, a comfy old couch, a CRT TV, some old video games, a cheap used car, beer, and marijuana, and you can probably find people to have sex with you. Not exactly the Ritz, but not exactly the pangs of privation either!

An even bigger reason that the "tough love" approach to social engineering doesn't work has to do with the nature of human motivation. In my life, I have experienced both positive motivation (e.g. the chance to have a future I want) and negative motivation (the fear of failure). The latter works much better in short-term crunch-time situations - for example, "I had better study really hard right now or I'm going to fail this econometrics test, and my professor will kill me on the spot."

But that kind of fear doesn't work very well over longer periods of time - for example, in getting me to finish my dissertation. Eventually, fear and panic just grind you down and impede your productivity. Far more effective over the long run is positive motivation. Thinking about things I want gives me a positive boost and improves my overall energy level, in addition to the incentive it provides. So if conservatives want to get people to work hard, beating them repeatedly with the lash of poverty is not the best way to go about it. You'll end up with a bunch of poor people who are too exhausted, harried, and depressed to pick themselves up by their bootstraps. Henry Ford is one person who understood this.

Finally, there is one more reason why the "tough love" approach doesn't end poverty. That reason is social preferences. When you structure society so that there are a lot of poor people, then the lifestyle of poverty becomes "the thing to do." There are just so many poor people around that poor kids don't come into contact with anyone else. Poverty then becomes their world, and their aspirations and desires do not escape the ghetto. They grow up thinking that gangsters, not successful businesspeople or professionals, are the Big Dogs of society. They have no idea that hard word brings middle-class prosperity, because they don't see any examples of that happening...but, even worse, they don't really want to become middle class. They want to succeed within the context of the subculture within which they are embedded (note to sociologists: I am just making up terms left and right here). To a poor kid, a rich kid's version of "success" might look kinda neat, but it's too weird and alien and remote to be worth the effort.

So there are tons of reasons why simply smashing the welfare state doesn't instill poor people (or anyone at all) with good values. The beatings may continue, but morale will not improve. To conservatives, I say: If you really want people to value hard work and discipline, you've got to come up with a real, workable plan for achieving that goal.

What would such a plan look like? Loath as conservatives are to admit it, many liberals not only value hard work intrinsically, but have thought long and hard about what kind of social engineering would actually spread those values.

One basic idea is that hard work should be rewarded. Obvious, right? I mean, we're supposed to be economists here! People respond to incentives, and they are risk averse. A winner-take-all society is not very conducive to hard work; I'm not going to bust my butt for 30 years for a 1% shot at getting into The 1%. But I am going to bust my butt for 30 years if I think this gives me a 90% chance of having a decent house, a family, some security, a reasonably pleasant job, a dog, and a couple of cars in my garage. An ideal middle-class society is one in which everyone, not just anyone, can get ahead via hard work.

Liberals have tried hard to construct such a middle-class society. They came up with worker health and safety regulations, weekends, Social Security, labor unions, public schools, living wages, government-subsidized housing loans, grants and loans for college, earned-income tax credits, job retraining, and tax breaks for health care. Some of those ideas worked spectacularly, some failed. Many had mixed results. But the basic idea was sound: not just to give people handouts, but to make them feel as if they deserved what they were getting because of hard work.

Conservatives, meanwhile, are all too often divided on whether they actually believe that hard work works. Plenty of conservatives have undermined Cowen's hard-work-and-discipline bloc by saying that success in life is all due to natural differences in ability. These "I.Q. conservatives" see inequality as the natural order of things. They have focused on getting people to accept their place in society and learn to live with what they have, rather than strive to move up in the world. This is a very Old British sort of conservatism, a nobility-and-peasants ethos dressed up in the faux modernism of psychometric testing.

Conservatives need to look in the mirror and ask themselves: "Do we really want people to work hard and be disciplined? Or do we just say that in order to keep the peasants from getting restless, when deep down we believe that it's all about good genes?" Because if it's the former, conservatives should do some hard thinking about what actually gets people to work hard. And they should think about how to respond to those among their colleagues for whom it is simply the latter.
Author: Noah Smith Posted at 10:41 PM